December 01, 2014
Another holiday has come and gone. For many Whites it was a chance to worship the negro on their electronic synagogue and battle for Chinese garbage at some jew-owned store. Others were huddled in their JUDEO-christian false church, hearing a sermon about how jews are the chosen ones and the importance of adopting African sewage. We've seen it before. This latest sickening example of White genetic and spiritual suicide comes at a time when our nation is rushing toward collapse, when are cities are literally burning. Some Whites can't be reached. They remain in the kosher coma, cuckholded by the African Heart of Darkness.

As many celebrate Thanksgiving and recognize why they are thankful, a Nashville family is giving thanks for being able to add to their family.

Naturally we're not talking about having White children, which is evil. No, it's more worship of the other raised to a sickening level.

Make room for negro turds fresh from the African bowels. A dying nation welcomes more invaders, more genetic aliens eager to feast on the corpse. The America turkey is cooked and ready to be devoured. Take a leg, African negro. 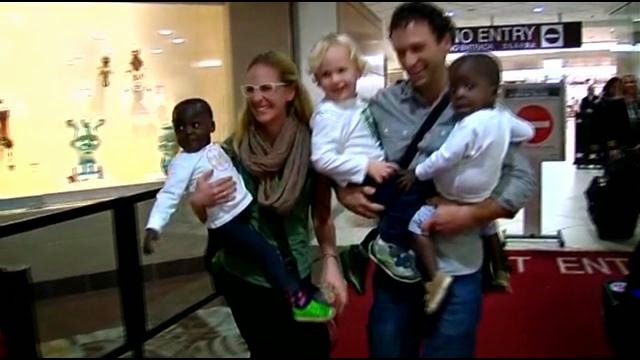 The pathology of the American White.

The Sokolowskis were supposed to become parents to a child from Russia, but after a series of twists and turns they were matched with twins from the Congo.

Russia is aware of our spiritual sickness and said no. Luckily the African zoo provided two 60 I.Q. "diversity" props.

“When Jim and I started dating I told him I wanted to adopt and he was fully supportive,” explained Mary Anne.

Any sane White man would have dropped this head case.

Legal issues have prevented many Americans families from following through with the adoption process. The Democratic Republic of Congo suspended adoptions due to concerns about child welfare.

Even the Africans are aware of our sodomite sickness.

These same careerist scumbags are completely silent when it comes to the foreign invasion taking place at our southern border.

“When I look at the five of us together, I just realize you know there was a miracle that happened." said Mary Ann. 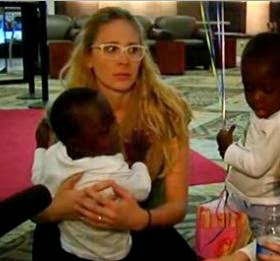