January 14, 2015
The jew is never responsible for the "anti-semitism" their actions invariably generate. We all know they're the Light of the World, beings of pure goodness, the favorites of g*d. Defending the jew from the consequences of their nation destroying actions must be the top priority. Send the army. We can't have the biological weapon they unleashed hit them with friendly fire. White lives are worthless, who cares. Jew buildings must be saved from possible Religion of Peace blow-back.

Not long ago, he was fighting militants in foreign lands. But now, and for the foreseeable future, he has an assignment far closer to home: protect the hundreds of Jewish children, some as young as 2, who scampered about Monday behind walls whose Star of David etchings could make the building a prime target for attack.

Not long ago he was fighting zionist wars in the Graveyard of Empires. Now he must defend those same jewish parasites from the foreign invaders flooding into Europe. No one cares about this White soldier. His job is to die. Die for Israel, die for the jew at home. Die.

After reveling Sunday in the unity of millions marching in the streets against terrorism, the nation awoke Monday to the sight of 10,000 troops fanning out to guard “sensitive sites,” including synagogues, railway stations, airports and tourist attractions. Nearly half the soldiers — about 4,700 — will be assigned to protect France’s 717 Jewish schools, officials said.

A sad commentary on the nation that once produced Charles Martel and Charlemagne. Guard the synagogue. Protect the chosen. Ignore the approaching doom your nation is sleepwalking toward.

“It’s an indication of the level of menace we face,” said Col. Benoit Brulen, who stood guard with three rifle-toting soldiers at the Jewish school and synagogue in the city’s 11th arrondissement — not far from the offices of a satirical newspaper where the bloodshed began last week.

Said menace must never be named, of course. Islamic invasion and Dhimmitude, promoted by jew communists. Now we must save them from the evil they unleashed.

The troops’ presence, Brulen said, would continue “as long as the threat exists.” 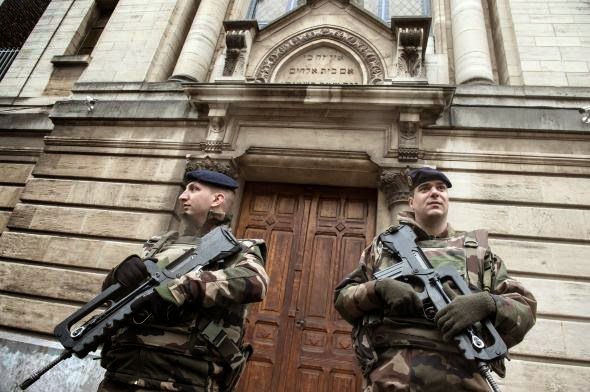 Goyim protect the animals that are more equal.

Officials across Europe have acknowledged they are overwhelmed by a rapidly metastasizing threat from militant Islamists and say the continent remains vulnerable to further attacks like the ones last week.

“There are going to be some very serious discussions about how to deal with this threat, and unfortunately that equates with some kind of militarization,” said Myriam Benraad, a terrorism researcher at the Paris-based Sciences Po university.

In a sane nation it would equate with some kind of deportation.

Perhaps no community has been more affected by the violence than France’s Jewish population, which is one of the largest in Europe. France also has the largest Muslim population in Western Europe, at 5 million.

The special and unique suffering of the jew. So persecuted.

The major security buildup around Jewish sites comes after Israeli leaders urged European Jews — and, in particular, those in France — to move to Israel in the face of growing anti-Semitism.

The rats prepare to abandon the sinking ship of the West.

“We have had a Jewish community living here for more than a thousand years,” he said. “We went through bombing attacks, the [Holocaust], acts of terrorism, and we are not about to leave now. We just want to be safe.”

Oy, the holohoax. Grandma up a chimney. We just want to keep destroying White nations in peace, is that too much to ask? 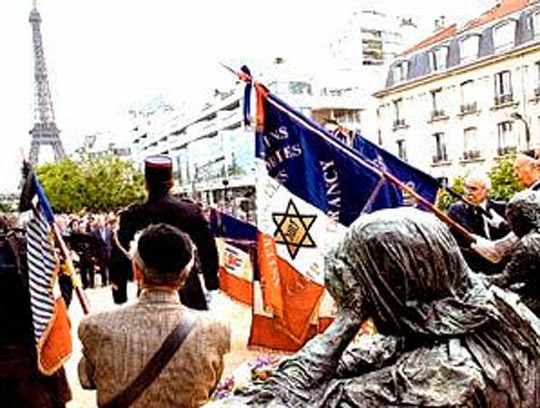