January 27, 2015
Europe is at a crossroads right now. Unlike in the U.S.S.A., where the demographic tipping point has already passed and doomed our nation to the ash heap, there is still time to reverse the negative trends destroying our White homelands. The obvious failure of the "multicultural" state, complete with jihad attacks and calls for more thought crime arrests, has galvanized many White Europeans into action. It can still be saved, the enemy within can be removed. Meanwhile, we get emotion from the liar press. We get tall tales, Soviet war propaganda and don't forget the poor oppressed muslim that just wants to be left alone and certainly isn't creating no-go zones. We get an obscenely wealthy jew turd calling for the destruction of White nations so this suited demon can get slightly more wealthy.

Peter Sutherland told peers the future prosperity of many EU states depended on them becoming multicultural.

It's funny how it's always a small and wildly representative minority with power incredibly disproportionate to their numbers making these suicidal demands on Whites. Ignore the jew behind the curtain. Go back to your dreary job, your high taxes to fund your own destruction, your spiritual and cultural emptiness. It's bliss.

He also suggested the UK government's immigration policy had no basis in international law.

Why any White nation should care about kosher "international law" is a mystery. Let the foreign jew impose laws on you, White man. It's the right thing to do.

Mr Sutherland, who is non-executive chairman of Goldman Sachs International and a former chairman of oil giant BP, heads the Global Forum on Migration and Development, which brings together representatives of 160 nations to share policy ideas.

Filthy rich from corruption and evil. An enemy of White nations. This is the jew. The alien parasite, the bloodsucking outsider, the money thug pitching communism to the cattle.

He told the House of Lords committee migration was a "crucial dynamic for economic growth" in some EU nations "however difficult it may be to explain this to the citizens of those states".

How to convince the average White that it makes sense to accept displacement and genocide in their own homelands in order to make a slimy jew bastard a few more shekels for the pile. Oh, I know! We'll just lie. 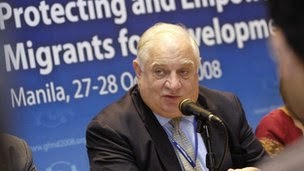 The ugly face of the jew enemy.

An ageing or declining native population in countries like Germany or southern EU states was the "key argument and, I hesitate to the use word because people have attacked it, for the development of multicultural states", he added.
Set it up, knock it down. Jew authored feminism, materialism, economic collapse and spiritual poison create an atmosphere where Whites aren't having children. Now to deploy the brown biological weapon to "solve" the problem they created.

He told the committee: "The United States, or Australia and New Zealand, are migrant societies and therefore they accommodate more readily those from other backgrounds than we do ourselves, who still nurse a sense of our homogeneity and difference from others.

Meanwhile back in the U.S.S.A. Missouri is burning. A migrant society, a 3000 mile wide corpse.

"And that's precisely what the European Union, in my view, should be doing its best to undermine."

Open declaration of war against White Europeans. Had enough of this jewish evil yet?

Mr Sutherland recently argued, in a lecture to the London School of Economics, of which he is chairman, that there was a "shift from states selecting migrants to migrants selecting states" and the EU's ability to compete at a "global level" was at risk.

There's a risk El-France will fall behind in the burning cars race!

Mr Sutherland, who has attended meetings of The Bilderberg Group, a top level international networking organisation often criticised for its alleged secrecy, called on EU states to stop targeting "highly skilled" migrants, arguing that "at the most basic level individuals should have a freedom of choice" about whether to come and study or work in another country.

This is pure evil.

"The UK has been very constructively engaged in this whole process from the beginning and very supportive of me personally."

The United Kaliphate happily marches toward the kosher gallows.

Asked afterwards how much the UK had contributed to the forum's running costs in the six years it had been in existence, he said it was a relatively small sum in the region of "tens of thousands".

A small sum. Pleases step up your contributions to your own death. 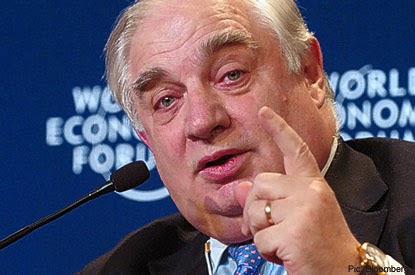