January 20, 2015
When Whites are gone the negro can then begin playing the game of "Who be da real nigga?" descending into African savagery and tribal warfare. It could take the form of attacking "yellas" or, like yesterday in St. Louis, turning on their fellow negroes who are deemed insufficiently "real." This is the negro left to its own devices, an animal that eats its own. Right now they're competing to see who is more communist, who is more completely under the thrall of Big jew. In a few years it might be witch hunts, tribal violence and the heart of darkness in middle America.

While one group of alien outsiders were worshiping their leper messiah the George Soros funded sewage managed a brief disruption of the holy rites of our State Religion. Animal against animal, criminal clashing with criminal as a burning city provides the backdrop. We dyin' here.

The protesters accused the university and clergy at the King event of being part of the “establishment,” and later got into a confrontation with Harris-Stowe students outside the venue, as police converged on the area.

The conflict — which was reminiscent of the internal Civil Rights Movement divisions that King himself had to navigate half a century ago — ultimately dissipated, and the King Day event resumed. There were no immediate reports of arrests.

The conflict, which was reminiscent of something you might see in Sudan, fell apart and the idolatry continued. No arrests, of course. 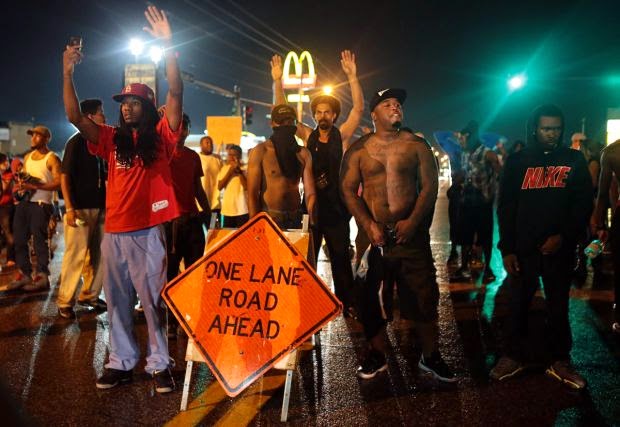 The dream is over. The nightmare begins.

Brown, 18, was killed Aug. 9 during an altercation with Ferguson police Officer Darren Wilson. The shooting, and the subsequent decision by a St. Louis County grand jury not to indict Wilson, prompted protests, some of which were violent and led to destruction and looting in the St. Louis region and around the country.

For the benefit of someone who was in a cave in the Gobi desert for the last six months. Yes, "some" were violent or led to destruction. A few bad apples, not at all representative of the just and noble negro who gathered on their Holy Day to howl "You a yella!" at each other.

Shortly before 1 p.m., about two dozen protesters entered waving an upside-down American flag and chanting, “No justice, no peace!”

They took the stage, and as the crowd began filing out angrily, they used a microphone to accuse the university and the clergy of being part of the problem.

"Y'all Unca Tamms an' churr niggas be part o' dee pablum. I hate dee wite debil." This is what passes for political discourse in the decaying body politic of the U.S.S.A.

Some Harris-Stowe students, watching protesters facing off with police, got frustrated and started yelling, asking why protesters would target a Martin Luther King Jr. Day event at a historically black college.

Russell, who said he attended Harris-Stowe, said the university represents the “establishment” and “the politics of respectability.” He defined that as an ideology that says people who are outside the mainstream don’t deserve the same protections under the law.

“We are the people who worked all those days, and put up all that resistance and went to the U.N.,” Russell said. “Don’t you see how they disrespect us? As soon as we showed up, they wanted us gone. They want to run back to their masters.”

Save us United Nations! Wow, what a hero. You are truly a revolutionary soldier. Here's your George Soros pay-off, by the way.

“It’s not that I disagree with their cause, but this is about Martin Luther King,” said Dave.

"I want to kill Whites, too, but we've got to worship our false god."

Harris-Stowe freshman Shaquell Humphries, 18, agreed: “They came in here (being) so very disrespectful. There are old folks and little kids in that auditorium, and they (the protesters) started cussing.”

The negro anti-soul. Our dark future.

Johnetta Elzie, 25, a major presence at the protests since the killing of Brown, said, “I feel good,” as she stood outside the Old Courthouse. “I just hope we keep true to who and what Martin Luther King stood for.”

Later in the day, about 250 protesters marched on the Ferguson Police Department without incident. There were no arrests. 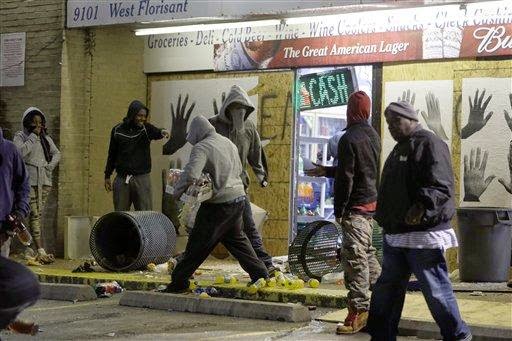