January 02, 2015
A nation is a shared language, religion, culture, values and beliefs. It is not an invisible line on a map or a flag, it is not a rescue mission for the world's derelict races, it is not a place where a decrease in cars set on fire by alien invaders is presented as a triumph. In El-France the city burned again, the annual tradition of brown dysfunction and jihadan worship of ruin. The criminal leaders are silent, the reports are buried. The flames continue to devour the West.

Another victory for "multiculturalism." Foreign criminals celebrate the only way they know how, by destroying. Human parasites gained access to a healthy White host and destroyed it. We need much more "immigration." Just ask the jew.

The figures issued on Thursday show that, despite the dip, setting fire to parked cars remains a firmly entrenched way for some French to send out the old and ring in the new.

The New France: mosques and child rapists, violence and anarchy. The invaders bring the same pathology that destroyed their own nations and unleash it on a slumbering populace.

Ministry spokesman Pierre-Henry Brandet said on BFM-TV that numerous cars were burned around the country, particularly in the east, as well as in suburban Paris, notably the Seine-Saint-Denis region — where fiery riots around France started in 2005.

So-called "diversity," which means fewer Whites and nothing more, always seem to bring this failure with it. How many cars burned when France was a White nation?

Police state battles the rot. The last stand of an old order that swallowed islamic poison. 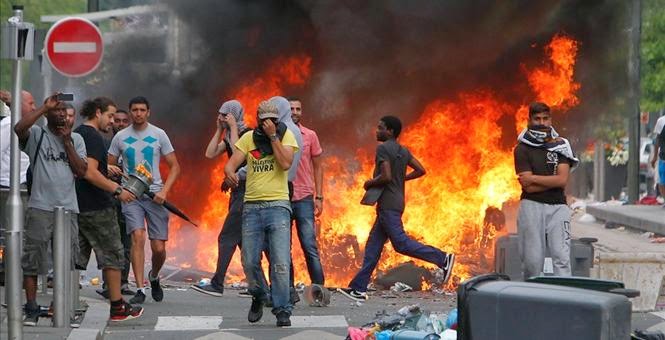