February 17, 2015
The failure of the American negro and the willful denial of that failure by the criminals in power and the liar press will be a curiosity for future historians, assuming there is a future where anyone still cares about the past beyond "everyting wuz races bak den" or "dats when da wite debil still zissted." It's arguable that the equality cult of a hundred years ago could be forgiven for their ignorance, but today that assertion is untenable. We have I.Q. tests, DNA evidence and streaming video of the content of their behavior that any White, no matter how sheltered, can safely view and marvel at how we pretended these genetic and cultural aliens could live in a White nation. At a Florida theater we got another look. While spiritual sickness flickered on giant screens, the sub-Saharan animal was on the loose.

There was a chaotic scene at an Ocoee movie theater when hundreds of teens stormed the building, trying to get in for free, according to deputies.

Gibs me dat gone wrong. With the endless hand-outs from White taxpayers and the constant groveling negro appeasement maybe they legitimately thought that they could just walk right in. After all, no human being is illegal. Let them all in to watch some kosher bowel movement.

Orange County sheriff's investigators said up to 900 middle and high school students tried storming the theater.  Deputies said about 200 students were able to get inside the building before the security gates were closed.

Nearly a thousand evolutionary dead-ends put the theater "on tilt." A glimpse of the coming collapse, when hordes of identical looking and behaving "diversity" storm buildings, their primitive minds bent on death and destruction. We need to be armed and organized. That day is coming soon.

"(It's) a big concern to us that are juveniles are doing this at such an early age," said Orange County Sheriff's Office Lt. Paul Hopkins.

Those crazy "teens" and "juveniles." Race erased, as per policy. It's just harmless pranks, you were young once, gentle giant going to grandma's house, etc.

Investigators said as the crowd was being taken from the area, several fights broke out in the parking lot.

Punishing Whites should solve this. 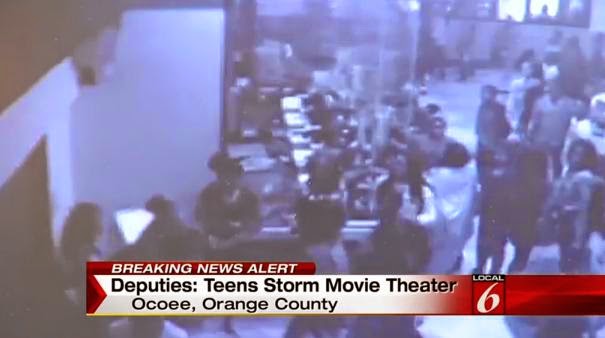 Officers dispersed the crowd after many of them stormed the theater.

There's going to come a day when the 90 I.Q. police will look at the brown mob, say "no, thanks" and drive off. In Missouri that day has arrived.

Three teens were arrested on allegations of stealing cellphones from two other teens at a nearby location, police said.

"Everybody just started scattering, ducking underneath the seats," said moviegoer Kenny Johnson. "It was a scary moment."

Yeah. I'd imagine. Be armed. Get out of negro areas. Get organized. Hiding under a seat is not an adequate survival strategy.

"These are middle to high school kids who have guns, who are shooting guns, are robbing people, driving stolen cars and they have drugs in their cars," Hopkins said.

Police said it's doubtful any arrests would be made in the incident because they wouldn't be able to prove who had purchased a movie ticket. 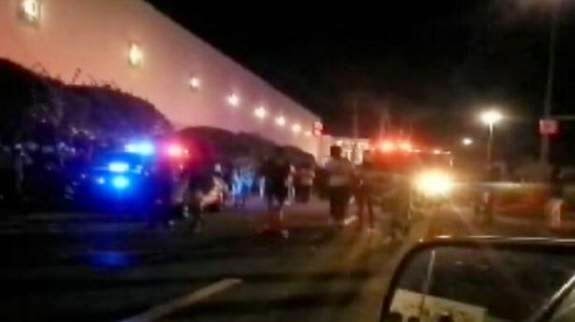