February 24, 2015
The American negro has an average I.Q. of 85. This number is inflated by the significant White admixture that has resulted from decades of kosher miscegenation campaigns. Back in the mother, where the alien genetics are fully expressed, the average is closer to 60. In a White person a score this low would indicate developmental disability, in the negro it's perfectly normal. Obviously, there are massive societal consequences of sharing your living space with an entire race that would be considered retarded by White standards. The reaction of our criminal government to this predictable failure has been to double down on the lies. Clearly the negro can be alchemized into a cut-rate White, if we just spend more money and sacrifice more lives on the altar of "diversity." Suffice it to say, this plan has failed miserably and the 2015 version of the negro is arguably the worst the U.S.S.A. has ever seen.

Whites are waking up. It's getting harder and harder to keep the lid on something that's as manifestly obvious as the inability of the negro to function in a White civilized nation. All are enemies can do is keep lying. Today a high-functioning negro deploys its 95 I.Q. to try to understand why his failed race isn't doing well in school.

If education is an escalator to lift people from poverty, young African American males are languishing at the bottom level.

The high quality symbolism produced by an affirmative action writer. Yeah, the bottom level of the escalator. I wonder how many qualified Whites were turned away so this exceptional animal with an intelligence that nearly equaled the White average could be given a platform.

Only about 60 percent of them will earn high school diplomas, and roughly four in 10 drop out before graduation day. That’s compared with a 65-percent graduation rate for Latino males and 80 percent for young white men.

Well, it's not genetic determinism causing this, that's for sure. Hey, did you see all the negro/shiksa pairings at the movie awards, goy?

Those are just some of the sobering takeaways from the 10th biannual Schott Foundation report on the state of African American males in public education.

It should sober you up, but this negro is going to continue to gulp down the rot-got of cultural marxism instead, falling into a pathetic stupor of "we all be equalz" and "more needs to be done." The answer is their removal.

“Simply stated, while most will say black lives matter and are important, the four-year graduation results in this report indicate that most states and localities operate at best, and have created at worse, climates that often don’t foster healthy living and learning environments for black males,” wrote John H. Jackson, president and CEO of the Schott Foundation for Public Education, in the report.

Yes, you read correctly. "States and localities" are responsible for the negro pathology, not their under-developed frontal lobes. Of course, it's the negro itself that creates the "climate" where failure occurs, but this is crime thought.

Pedro Noguera—a sociologist, an education analyst, and a professor at New York University—said the study wasn’t a surprise.

The overwhelming focus on education-reform initiatives such as Common Core, No Child Left Behind, and standardized testing, he said, has obscured nationwide issues like underperforming schools and resource disparities between rich and poor schools—problems reflected in the low graduation rates.

It's been proven beyond any reasonable doubt that education spending has no effect whatsoever, but for some reason it's still the best answer they have. The alternative, admitting racial differences, is unthinkable, so welcome to the land of cognitive dissonance.

As uncomfortable as it may be, he added, there has to be a national-level discussion about school and resource segregation, a problem that has largely been ignored.

By discussion we mean a cultural marxist lecture full of easily disproved claims.

“The fact that there was improvement shows it can be done,” he said. Still, “if you never talk about it, it certainly won’t happen.

"The lowered standards seem to be helping, but reality is so stubborn. Make it go away, it hurts my feelings." 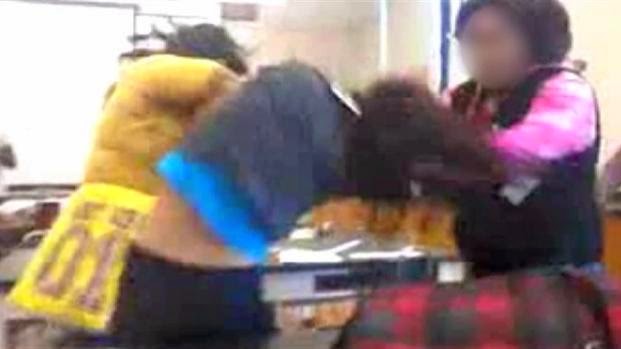