In the Middle of it All

March 31, 2015
Whites are evil racists who somehow create stable, prosperous nations that everyone wants to live in. We are told by the jew that it's our duty to invite the world's garbage into our homelands, to try and fail to alchemize them into something resembling a human being, to be a good sport about their criminality and pay to keep them fed and clothed. Suffice it to say, introducing foreign failure into a successful White nation drags that country down instead of elevating the invader. Importing 60 I.Q. religion of peace animals fresh from the African all against all into Middle America goes beyond simple delusion into active evil. They want us dead. The brown savage is one of the weapons.

Richfield High School is on spring break this week, but a lot of questions are swirling around the school after a portion of a classroom fight that took place earlier this month was caught on video.

Questions like "How can we get this into the memory hole?" and "Why would you even consider sending your White child to a public school?"

The 30-second clip appears to show the start of a fight inside a Richfield High School classroom on Friday, March 20.

So it would appear. It's your usual "high quality footage" recorded with a calculator depicting brown blobs attacking a White student. Unless you live in some kind of bubble or just got back from decades in Nepal you've seen plenty of "fights" just like this one. Black pack attacks. Whites are the target. The motive is racial.

Dawson Omlie, wearing an orange t-shirt, is in the middle of it all.

Whites in the U.S.S.A. in 2015: we're in the middle of it. We're surrounded on all sides by enemies that want us violently exterminated: the Wall Street jew, the wise la-teen-ohs pouring over our open border, the sodomites, the negro monster, the Somalian filth in Minnesota.

"It was just my head that was throbbing," Dawson tells Fox 9. "It hurt so much."

Expect a big "Pain is good!" campaign from the jew encouraging Whites to take beatings from imported genetic aliens to prove we're not "races."

The Omlies believe Dawson was hit upside his head some 20 times by one hoodie-wearing classmate. Another student allegedly kicked Dawson in the face.

"Upside his head." The high quality journalistic prose of the dinosaur media in a dead nation. Hoodie Americans brought in as a biological weapon for big jew "allegedly" tried to commit murder in publik schmuel. No one cares.

Now, the Omlies are demanding that police and the school hold those involved accountable.

As the rule of law collapses we can expect a lot more of this. The authorities will simply ignore the non-White pathology while Whites will be routinely arrested for thought, speech and face crime.

They allege the video shows a coordinated, almost rehearsed attack.

Richfield's police chief did confirm that his department is investigating the fight that took place in the classroom adjacent to a morning woodshop class.

"We've got more important things to do, of course, like arresting Christians for their timid opposition to the sodomite agenda."

School district officials aren't commenting on the video or Omlie's allegations about the story surrounding it.

A clearly premeditated attack by a pack of African animals with the intent to kill or maim a White victim occurred. The officials don't care. It's not like someone said the "N" word or anything. 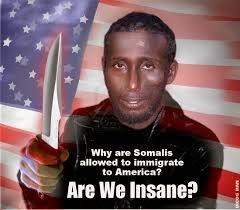