March 13, 2015
Ignorance is no longer an excuse when it comes to the American negro. Their pathetic, savage failure has been heavily documented on the internet: the pack attacks, the knockout game, the disregard for society and its rules. We can't have a civilized White nation with these animals in it. We've heard all the excuses and they all fall flat in the face of genetic evidence and typical negro behavior streaming right to your computer. This is a race that is not quite human and not quite animal, a failed branch of humanity carrying foreign genetic material from an unknown source. Fifty years of negro appeasement have accomplished nothing. They need to be removed. We need a White homeland.

A group of teenagers are seen on video pummeling a girl inside a Brooklyn McDonald’s — and no one tried to stop the violence.

The same negro pathology that it used to be possible to run and hide from can now be safely viewed in the comfort of your own house. There was a reason for segregation, and it wasn't because Whites were evil or "races."

As CBS2’s Dave Carlin reported, the vicious fight broke out at a fast food restaurant Flatbush on Monday afternoon.

Another 365 black moment. This is what our money and special preferences purchased. Jungle monsters tearing into each other against the backdrop of a dead nation. 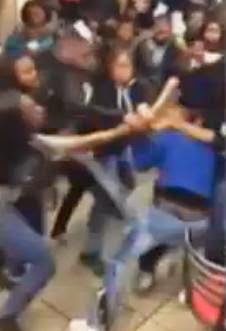 Many people took out their cellphones, but Carlin reported they were recording the fight rather than calling for help.

The content of their character. The heroic negro often observed on the talmudvision is strangely absent in real life.

The video starts with the gang assault already under way, as a group of girls exploded in a blind rage, with fists flying, inside the McDonald’s at 943 Flatbush Ave.

Living fossils driven by instincts toward violence and destruction. With no Whites to attack they turn on each other. 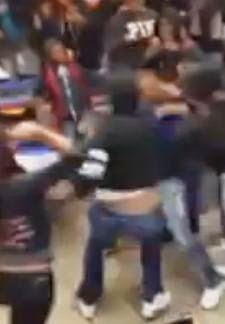 One young woman, who starts out wearing a black hoodie but later is seen wearing just a purple bra and jeans, is seen kicking the victim in the head.

The kosher future of the U.S.S.A.: a negro foot kicking a negro face. Forever.

Police said they were looking for the 17-year-old as the main suspect.

“Everybody was, like, enjoying what was happening,” a witness told 1010 WINS’ D’Auria. “I don’t think it’s right.”

Let them vote, give them special rights, ignore their crimes. What could go wrong?

Community leaders said they will not let the issue drop.

Maybe get the mulatto puppet to explain that this is the "Wrong thing to do."

“We have names. We have pictures. We have video of all these individuals,” activist Tony Herbert said. “So save the taxpayers’ money and bring yourself forward.”

We have footage of blurry brown blobs. Just a matter of time before we catch you.

"You have reached 911. Do to the high volume of negro crime and the fact that it's "races" to punish it we can't help you at this time. If you are currently being murdered, please stay on the line." 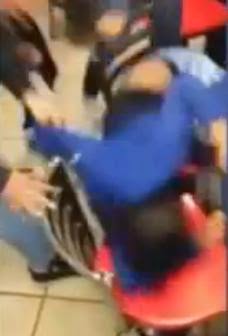