March 16, 2015
There's always more to do, always a new outrage that must be corrected at great cost in money and blood. Today we're told that arresting and punishing negro criminals is "races" and needs to stop. Tomorrow we'll be hearing about prison amnesty and hand-outs for the worst available brown animals. It's already starting to happen.

The Willotta Oaks Neighborhood in Fairfield is filled with big homes and friendly people like Martha Khamashta. She has lived here 36 years, and says it’s not a place for a violent sex offender.

Big homes and White people. Slave for a corrupt and evil system your entire life, finally obtain the means to flee from the necrosis of "diversity" and enjoy a small reward for your labor. Then it's all ruined by the jew wire-puller and their pets.

“It frightens me because our houses are connected,” said Khamashta.  She lives right next door to the home where Fraisure Smith could be moving into.

The rich cultural experiences you're going to start having. A rape ape has moved in next door, prepare to be enriched by this vibrant and soulful experience, unlike fake, lame and formal Whitey who doesn't do hip and cool things like forcing himself on underage girls.

According to court documents, Smith plead no contest to sexual battery of a 17-year-old girl back in 2006, as well as three other convictions dealing with rape or intent to rape.  In 2012, Smith was granted a conditional release.

Outraged neighbors say that the fact that the state will be paying the $3200 a month rental price tag for the 4 bedroom 3.5 half bath home with a pool is downright despicable.
A negro rapist is rewarded with a luxurious home. Hurry up and die, U.S.S.A.

“I just cannot believe the state would support this person,” said Khamashta.

We've spent fifty years supporting this "person." Fifty years of forcing a savage creature on a civilized nation with predictable and disastrous consequences. The jewish century, the all out attack on White homelands.

At least 50 people from the community attended a meeting Tuesday night voicing their concerns to the Sheriff’s department, but so far all indications are Smith will be moving in despite what his neighbors think.

Feel free to share your concerns, which we'll ignore. This is Democracy.

“No one wants him here,” said Khamashta.

No sane person wants to be anywhere near the genetic alien. Deportation must happen. 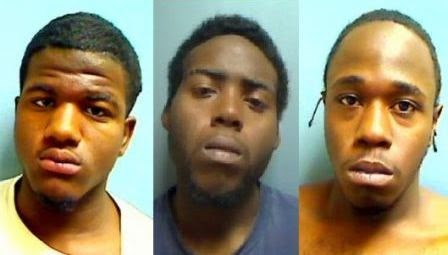 Let's give them fancy homes in White areas!
Content of Their Character Death of a Nation Fairfield Fraisure Smith It's Free Swipe Yo' EBT Pathology of the American Negro Rape Apes Willotta Oaks