March 11, 2015
Diversity means eliminating Whites. That's all it means. A room full of identical looking, thinking and behaving dark genetic aliens would be "diverse" as far as our jewish enemy is concerned. It's always been about attacking Whites and destabilizing our nations via the introduction of inept outsiders into positions of authority, from the presidency on down. Still, more needs to be done. As long as a single White man lives, more needs to be done. Our enemies won't be happy until we have been completely destroyed. This silent genocide, this endless secret war, is the legacy of the disastrous jewish century. Our survival is at stake.

Troubled by a lack of women and minorities at the Air Force's higher levels, its leaders are rolling out nine initiatives focusing on recruitment, promotions and retention.

A lack of low I.Q. animals containing foreign genetic material and hissing mentally defective dykes is apparently the biggest issue for a military that has participated in one defeat, embarrassment and kosher quagmire after another since the White male cannon fodder saved the world from the evil not-sees. We should be grateful; it's likely this bloated, loser force will be turned on American citizens very soon.

Some are new ideas. Others are existing programs that will be enhanced, Air Force Secretary Deborah Lee James said.

Exciting new ideas like "Me flyee dee plane, I theeenk," "Killing chill-ren wit deez drones be dope, yo" and "Dykes in Kites" are sure to fix the problem of too much White male competency.

"This is not just about how we look. It's about our readiness and capabilities today and in the future," she said during an event on women and leadership in the military, sponsored by the Center for New American Security.

That comment makes absolutely no sense, but because it's compliant with our State Religion it will be accepted without question. You might wonder how "readiness" will be improved by moronic brown animals, sobbing women and sexual deviants, but that's blasphemy and you should be punished for it.

Another memo makes the argument that the service must diversify to retain its military superiority.

Sounds like an announcement they'd make in a Roman legion, circa 450.

Women make up 19 percent of the Air Force. But they are twice as likely as men to cut their military careers short, James noted.

Furthermore, she said, both women and people of color are underrepresented in the pilot ranks. She attributed the imbalance to a male-oriented military culture, rigid regulations and laws.

Must be, because we all know everyone is equal.

The service is "working its ways through the process" and has several other initiatives that are "not quite ready for prime time," James said.

Our not quite ready Air Force. Aim high. But not too high, because idiotic negroes, frail and emotional women and invaders who don't speak a word of English should be piloting sophisticated and incredibly expensive fighter jets, too.

"I expect this will be a journey in all of the military and it will be up to me, and people like me, to keep on it with persistence, focus and leadership," she said.

At the same time, the service will make it easier for shorter people, those under 5-foot-4, to become pilots.

LOL. Great news for Pablo and Lizzie the rug muncher. We'll just put a phone book on the seat and you'll be just as qualified as any White male who actually met the standards.

Height limits are set according to the size of the most restrictive cockpits, James said, but there are many other planes that shorter people could fly.

Cockpits be "races" and "homophobic."

On sexual assault, "We're doing better but not well enough."

Studies by the Defense Department and RAND, the think tank, show the prevalence of sexual assaults in the service has declined even though the number of incidents reported has increased. 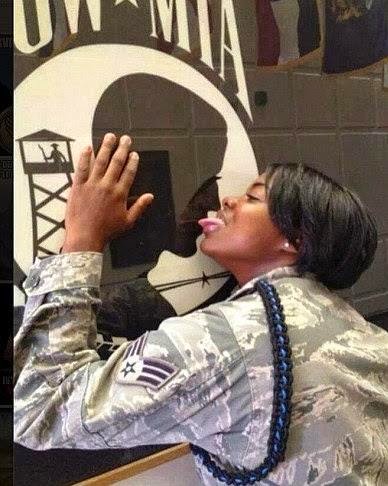