April 28, 2015
In 2008 a foreign born mulatto sodomite was installed by big jew. The hope among delusional Whites was this kosher appointment would finally put an end to the fifty year long howl of "racism" and allow America to come together under the banner of a mystery meat who had lived in Indonesia, attended a "Burn baby, burn!" church, had deep communist ties and an impressive talent for reading text on screens in a deep voice while cocking his head upward. Suffice it to say, the "Great Uniter" proved anything but. Our "yella" president encouraged violence against Whites, supported negro criminals, talked in a goofy Taco Bell dog accent while pandering to la-teen-ohs and generally behaved like a tribal chieftain. We had committed national suicide in the name of good feelings and misplaced altruism.

Our dead nation began to burn. First "isolated" and "random" attacks on Whites accelerated, then full blown riots or "demonstrations" and "protests" if you believe the dinosaur media. In the past few days another American city went up in flames. We haven't reached the end of the U.S.S.A., but we're getting close.

National guard troops are deployed in front of Baltimore City Hall this morning and a state of emergency has been issued after violence erupted in the city Monday afternoon.

Our dead gay military deploys to battle the negro animal. Welcome to African America, the heart of darkness on the eastern seaboard. This is the future of our cities. It's all going to burn. 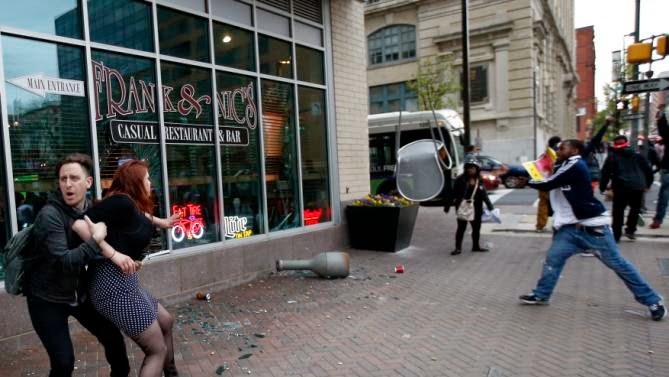 The real life negro is not like the one on the talmudvision.

About 500 guardsmen are supporting law enforcement in Baltimore, according to Maryland National Guard spokesman Lt. Col. Charles Kohler, with plans to increase their presence to 2,000. 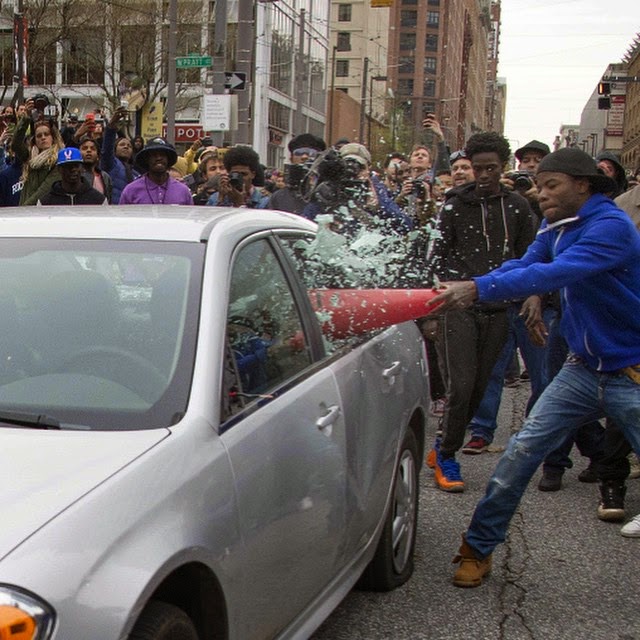 More negro appeasement should fix this. 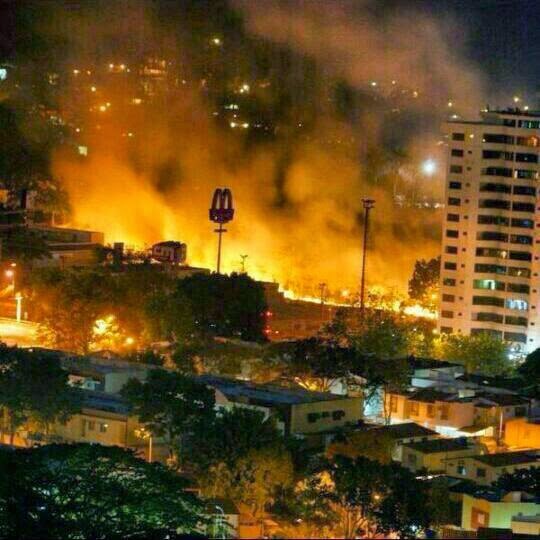 Gave proof through the night, that our 365 Black McDonalds was still there...

A citywide curfew will be in effect from 10 p.m. today until 5 a.m. Wednesday. The 10 p.m. curfews will last for one week, mayor Stephanie Rawlings-Blake said, and could be extended as necessary. 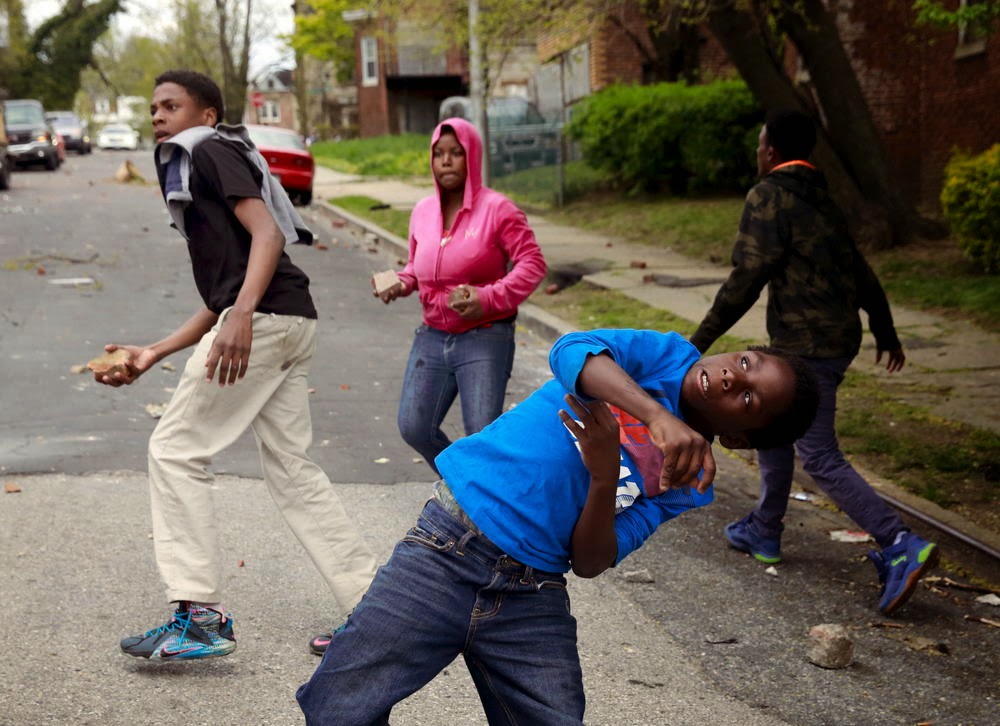 "This is not a lawless city," Rawlings-Blake said. "I'm at a loss for words."
Loss for words is right. Earlier this moronic negress said that rioters would be given space to destroy. 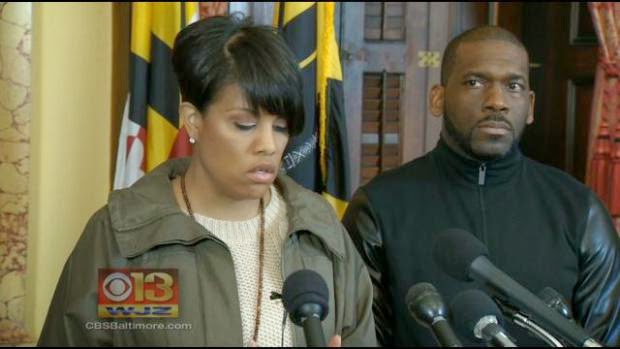 Now is not a safe time to be a drunken White fan of the negro super athlete. 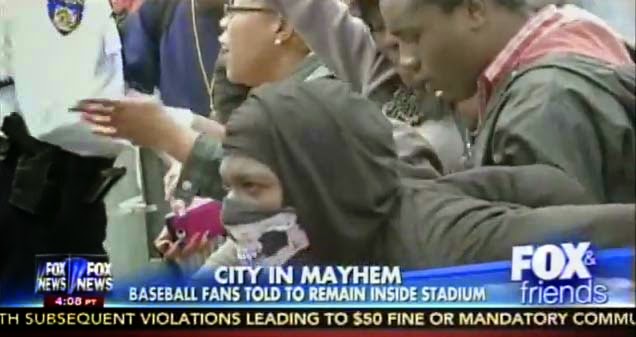 Fifteen officers were injured, six seriously during Monday’s violence, Police Commissioner Anthony Batts said in a news conference. Those injuries are not expected to be life-threatening.

It's nothing, your country is definitely not devouring itself, go back to sleep. 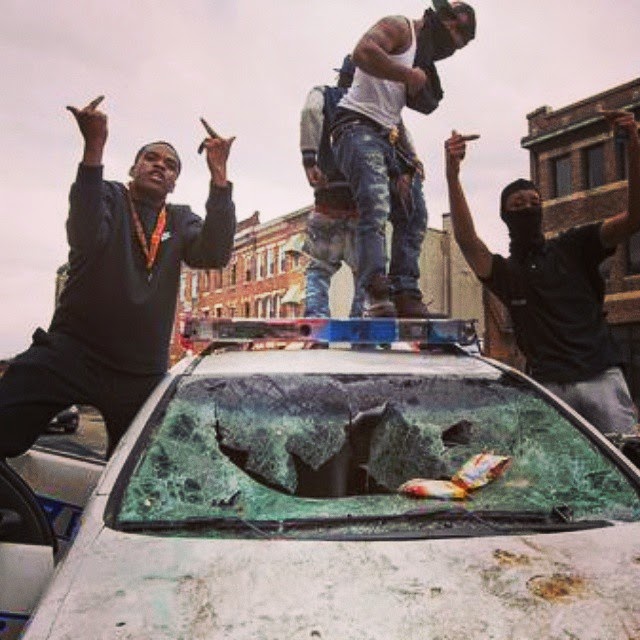 "This is not protesting, this is not your First Amendment rights,” he said. “This is criminal acts.” 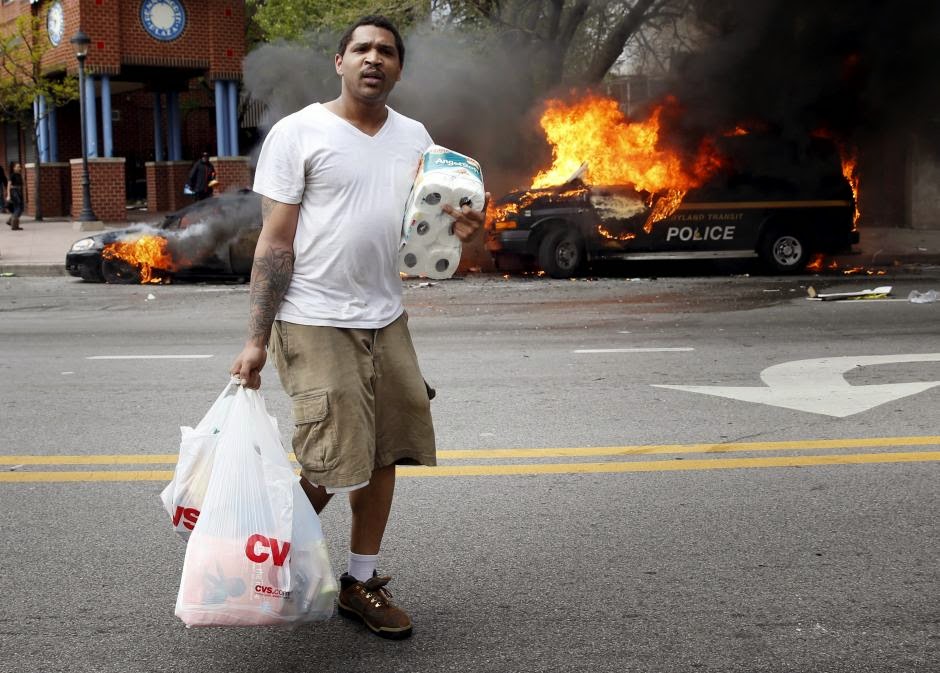 Gots to get dat loot on.

The unrest was sparked by the death of Freddie Gray, who died after being in police custody. Gray’s mother, speaking the night of the 25-year-old’s funeral, made a plea for peace. 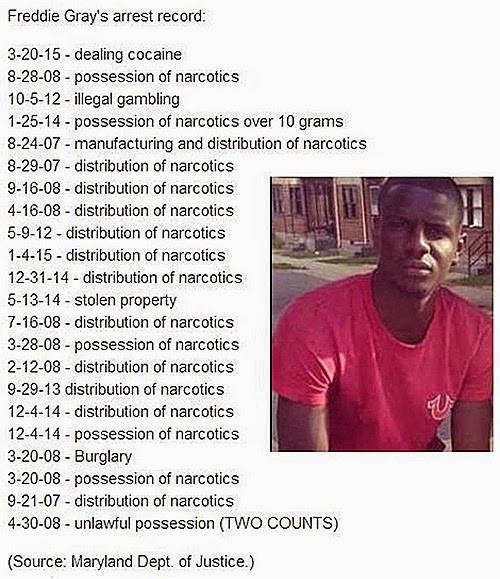 “I want you all to get justice for my son, but don’t do it like this here. Don’t tear up the whole city just for him,” Gloria Darden said. “It’s wrong.” 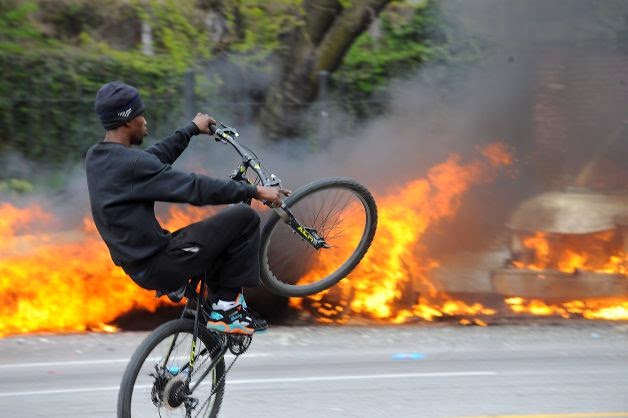 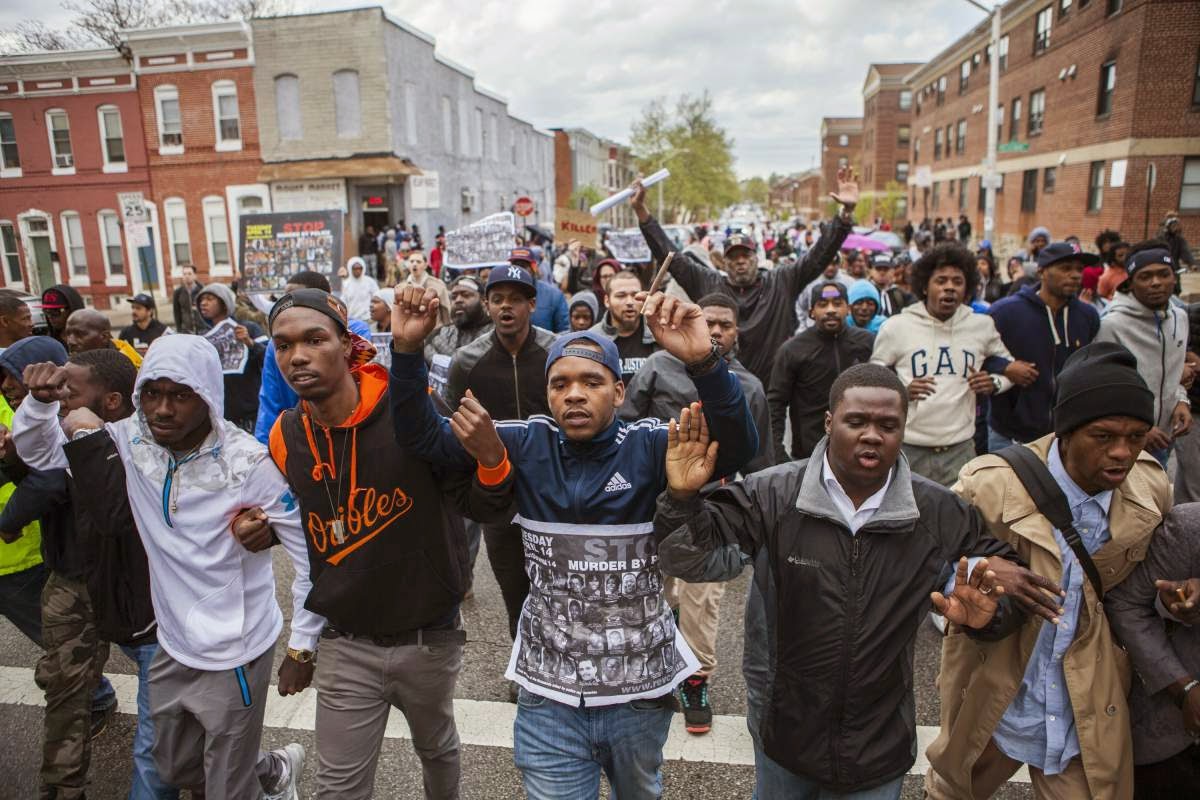 Two-legged plague; the reason you need to be armed.

Newly minted Attorney General Loretta Lynch also weighed in on the situation in Baltimore, condemning the “senseless acts of violence by some individuals in Baltimore.”

Those crazy "individuals" and their little senseless acts. I'm sure there was no racial component. 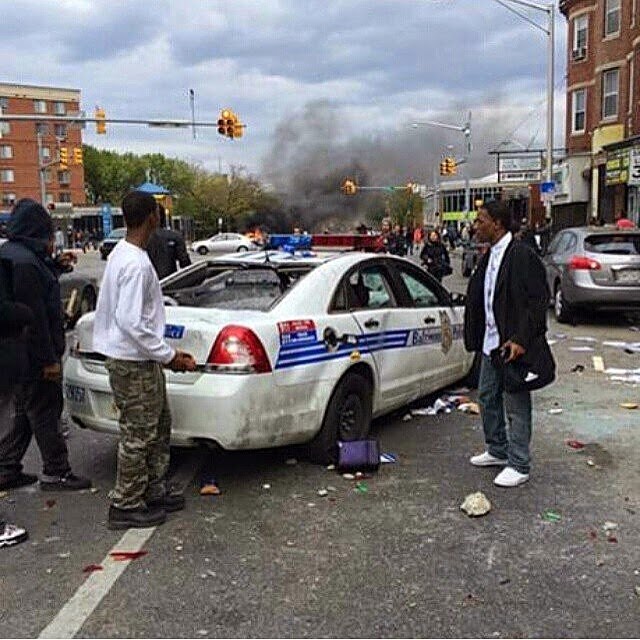 A scene from Mogadishu unfolds in the U.S.S.A.

“The Department of Justice stands ready to provide any assistance that might be helpful,” Lynch added. “The Civil Rights Division and the FBI have an ongoing, independent criminal civil rights investigation into the tragic death of Mr. Gray.”

Don't worry, we'll punish the evil "races" White man that forced you to burn and loot. 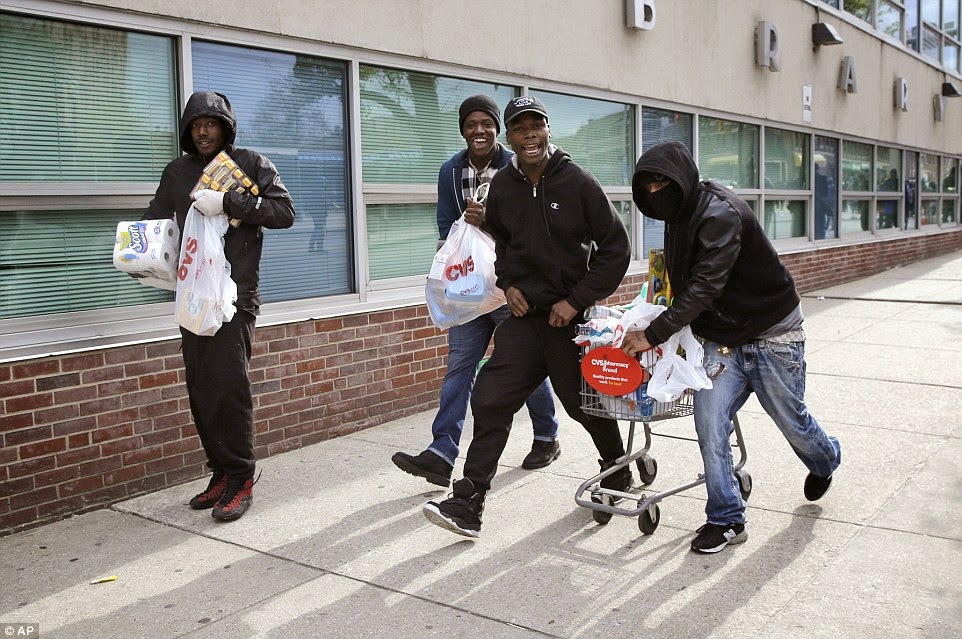 Monday's clash at the mall follows a volatile weekend in Baltimore. Protests that started off peacefully Saturday turned violent by afternoon in downtown Baltimore.

It was peaceful for at least a minute or two before the massive chimp-out. 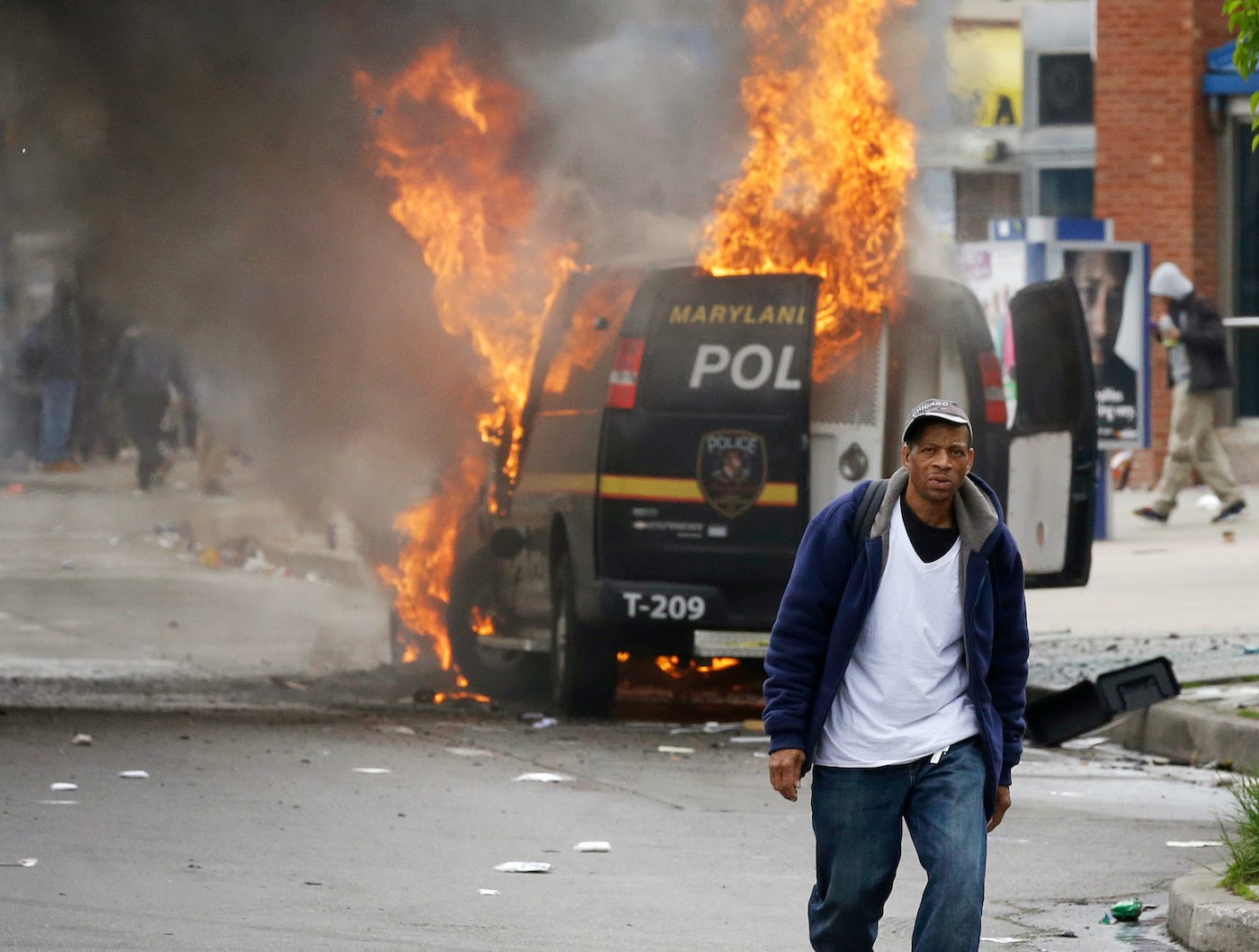 Not the best weekend for Baltimore. 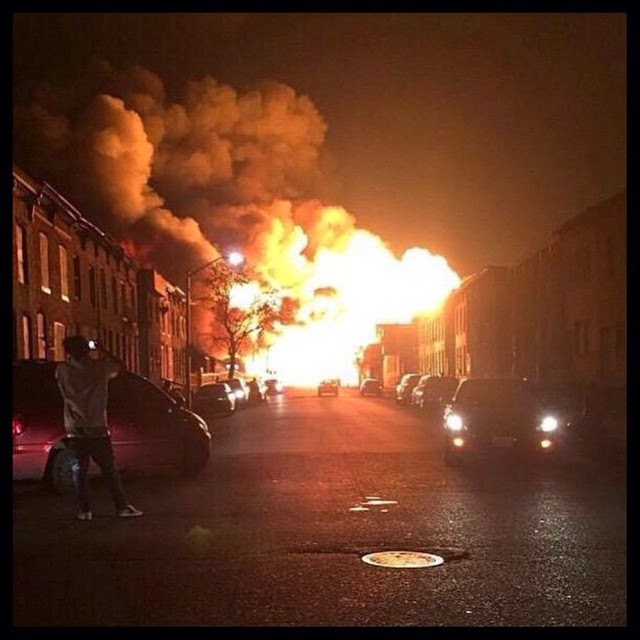 Another preview of the coming collapse.
All Against All Baltimore Baseball Big Chimping Death of a Nation Freddie Gray Maryland Pathology of the American Negro Rioting Space to Destroy Stephanie Rawlings-Blake