April 07, 2015
We need a lot more non-Whites in White nations. If you want to succeed in politics, whether as a cultural marxist or a paycheck conservative, you're going to need to believe this. After all, the "diversity" of identical looking and behaving foreign garbage who have already destroyed their own homelands is truly our greatest strength. Just ask any jew. Consider all the benefits White nations are receiving as a reward for our complete kosher surrender to the brown horde. Invite them into your home, Whitey. Isn't the African muslim good? This won't lead to disaster, we promise.

Asylum-seekers are flooding into Germany in record numbers, with more than 200,000 applying for that status last year, many from Muslim countries, according to the government.

The jew authored flood of mud. Tiny Germany is expected to take in a million brown religious, cultural and racial aliens every five years and is somehow expected to survive this unprecedented national madness. Restoring the former glory that was lost or a decent into the mohammedan sewer. Which way, Europe?

Evil "races" not-sees forcing the gentle and wise religion of peace locusts to live in shipping containers! It's another holohoax. Please accelerate your suicidal altruism Germany. A lot more needs to be done.

The western German city of Schwerte even proposed placing 21 refugees in a barracks on the grounds of a Nazi-era concentration camp.

You can probably imagine the amount of jew wailing that produced, even as they press the knife into our throats, preparing Europe for kosher slaughter.

Berlin residents Mareike Geiling and her boyfriend, Jonas Kakoschke, have a different approach.

That approach is to lie down and die.

"We don't like the idea of putting these people into one place where many, many" people live, says Geiling, who is 28.

"Having an artificial sense of righteousness is more important to me than my own survival.

We have no place for the invader. Better bring more in.

So the couple decided to launch Refugees Welcome, a website in English and German that matches asylum-seekers with people willing to share their homes with them. They have more than 400 applications in the works — in Germany as well as Austria.

It's your big chance to house a coal black jihadan! What could possibly go wrong? 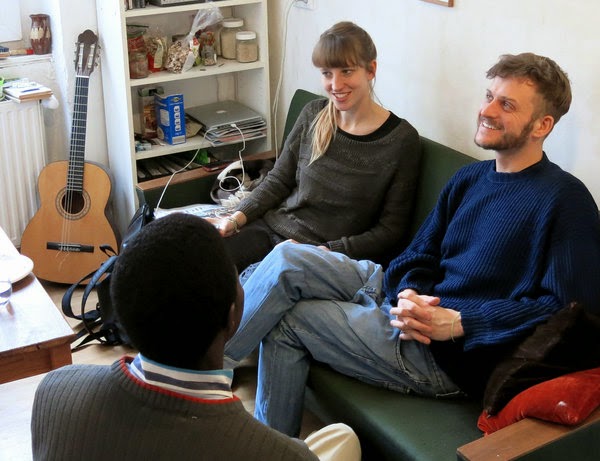 She and Kakoschke were the first Germans to open their doors. Geiling is away most of this year on a teaching job in Cairo, so last December the couple sublet her room in their fourth-floor, walk-up apartment in the diverse, working-class neighborhood of Wedding to a Muslim man from Mali.

Look at their faces in the above photo. Look at the weakness, the detachment from reality, the goofy smiles full of sanctimony. Lambs to the slaughter. Is this your future, Germany?

The 39-year-old, who is afraid of giving his name for safety reasons, has applied for asylum and is awaiting a work permit. In the meantime, Kakoschke and Geiling (who happened to be back in Berlin when NPR visited to the apartment) say they rely on donations to cover the new roommate's $430 share of rent and utilities.

Open up that wallet. Pay for your own annihilation.

The roommate says he still can't believe Germans would open their apartment to asylum-seekers. "It surprised me a lot because ... the people here don't want to see people like us in their land," he says.

"I can't believe it. It's like these pathetic kuffirs don't even have the most basic sense of self-preservation. I bet they won't even fight back when I rape and murder them."

"I think I just asked when we met the first time if it's OK for him that I drink alcohol," Kakoschke says with a laugh. "He said, 'Yes, of course, it's your life, do what you want with it.'"

Is it all right if we do certain things, Mr. Invader? We need the permission of a parasitic outsider. R.I.P. Germany. 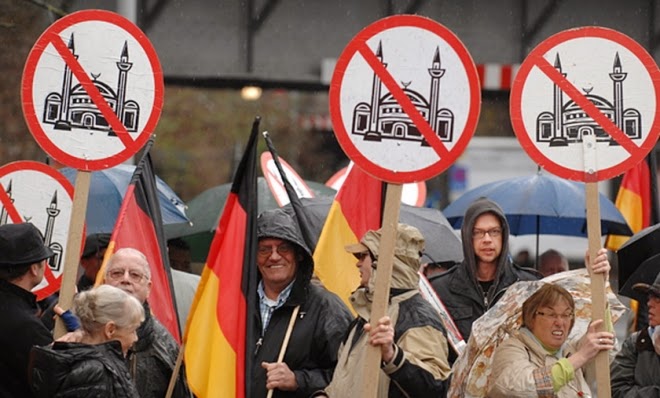