April 01, 2015
The suicidal generosity of Whites toward aliens that want us violently dead will be very hard for our descendants living in an all White nation to comprehend. They'll wonder why we came so close to annihilation for fear of being called names, why we were willing to die for a mythology authored by the enemy within. Assuming we actually survive the current push for White genocide and restore our nations, of course. Our sense of fairness and justice, completely unique to Whites, has been weaponized and turned on us and we now engage in pathological altruism toward our enemies, while being told how evil and "races" we are at every turn. It has to stop. It's time for charity to begin at home, within our own race. Our future is hanging in the balance. No more unearned, undeserved and unappreciated kindness for the genetic alien.

A teenager who received a life-saving heart transplant two years ago after initially being denied because of his bad behavior has died following a high-speed car chase with police.

Those crazy "teens" and their wacky and innocent "bad behavior." Must have put a firecracker in a mailbox or made a prank call or something. 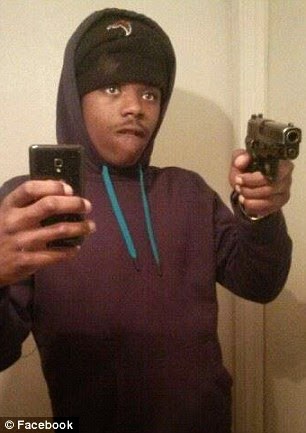 White medicine saved this animal so it could die committing a crime later.

Anthony Stokes, 17, died on Tuesday after he crashed a stolen Honda into a pole as he fled the scene of an attempted burglary at an elderly woman's home in Roswell, Georgia.

Gentle giant, presumably speeding back to grandma's house, wraps a car around a pole. Burglary gone wrong. We pretended it was human.

His death comes less than two years after he was given a second chance at life following a heart transplant at Children's Healthcare of Atlanta, the Atlanta Journal Constitution reported.

The big chance to turn that life around ends in predictable failure. Broken glass and twisted metal serves as a memorial to the content of its character.

He had been given just six to nine months to live but the hospital initially refused to put him on the waiting list for a new organ because they thought he would be 'non-compliant' with the treatment.

The mind of the negro, unable to comply with life-saving surgery. So moronic and unable to attach future consequences with current actions that instructions like "take this pill once a day so your body doesn't reject the heart" are unlikely to be followed.

At the time, the hospital said that Stokes had failed to take his medication in the past, so his history of non-compliance meant he was not put on the waiting list.

Stokes' mother, Melencia Hamilton, told reporters that her son, who wore a court-ordered monitoring device, had been stereotyped as a troubled teen.

Oddly enough that "stereotype" proved to be right on the money. There's a reason they exist, after all.

Following pressure from national media coverage, the boy's family and civil rights groups, the hospital backpedaled in August 2013, and the teenager received a new heart.

After some "We got's dee raht!" wailing, the usual White capitulation occurred. Let's save this negro so it can commit more crimes. A worthless criminal turd gets a donor heart that could have gone to a decent human being. This is the pathology of the American White. 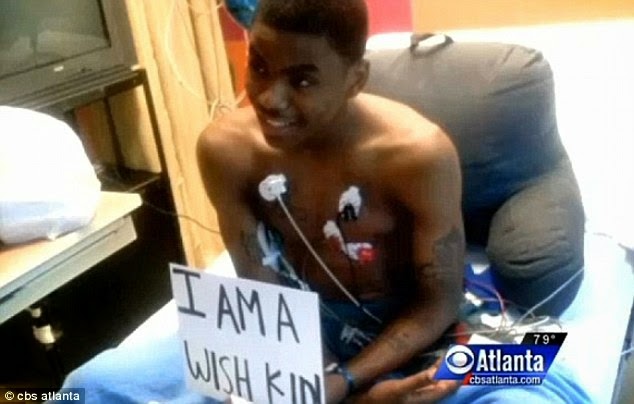 'After reviewing the situation, they said Anthony would be placed on the list for a heart transplant and that he would be first in line, due to his weakened heart condition,' spokesman Mark Bell said.

Who knows how many deserving Whites were passed over in favor of this walking dog shit. I wonder how many died while waiting their turn.

Photographs on his Facebook page show him shirtless with a large scar to his chest from the surgery. Other images show him pointing a firearm at the camera or holding up wads of cash.

On January 10 this year, he was arrested and charged with possession of tools for the commission of a crime and criminal attempt, according to DeKalb County jail, and he was released from jail on February 3 after posting $5,000 bond.

Well, I'm sure this creature learned a lesson and will straighten up and fly right.

Then on Tuesday, Stokes put on a mask and allegedly kicked in an elderly woman's door in Roswell and shot at her after finding her watching television inside, police told CBS46.

Why you need to be armed. When a coal black medical miracle kicks in your door you don't want to be staring helplessly into the electronic synagogue.

She fled to a back bedroom and was unharmed but bullet holes could be seen in her walls and a black car was seen fleeing from the scene.

She's very lucky. This easily could have been another "raping the elderly gone wrong" story.

With police on his tail, Stokes clipped a car on an intersection and hurtled towards the curb - knocking down a 33-year-old woman before smashing into SunTrust Bank sign and wrapping the car around its pole, Officer Lisa Holland said.

The end result of White sacrifices toward a failed race. We owe them nothing. They need to be removed.

The injured pedestrian, Clementina Hernandez, is in good condition in hospital but Stokes passed away after he was cut from the car and taken to hospital.

Encounters in diversity. A wise latina survives her brush with typical negro behavior, while the miracle primate takes the dirt nap, its donated heart beating its last.

You certainly made the most of it, that's for sure. 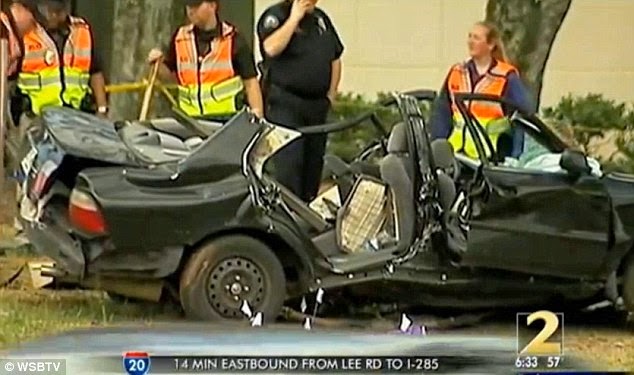