The Ever Growing Crisis

October 26, 2015
There's never going to come a day when the jew decides we've been punished enough and the endless kosher attacks on our homelands, children, culture, religion and history can cease or at least be slightly restrained. More, after all, always needs to be done. Every last White must feel the cruel jagged edges of "diversity," must drink the spiritual hemlock prepared by the Light of the World, must die. Watching Europe go down with little more than a whimper of "I'm not racist" clearly demonstrates what the stakes are. Even expecting to survive as a hated minority in a jew-ruined zoo of a nation is unrealistic. We win our freedom and right to self-determination or we are destroyed. Those are the only choices.

Battling strong winds, driving rain, mud and freezing temperatures, these stunning photographs show a slow trek of thousands of migrants making their way to Europe amid the harsh conditions of the oncoming winter.

Neither rain, nor snow, nor dark of skin will stop this invading army from carrying out its genocidal duties. A Biblical plague is unleashed on Europe. Let my people go, jew.

As one European leader warns the ever growing crisis will see the EU fall apart 'in weeks', tens of thousands of people are continuing to try and reach the Eurozone via the arduous Balkans route.

The spectacular failure of "doing the right thing," the collapse of One World lunacy into every man for himself. Fighting age jihadans flood into the formerly White homelands, eager to rape and kill. Europeans voted for this. We were afraid to be called a name and we didn't want to lose that careerism. Now you die for it. 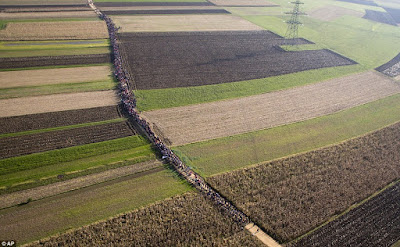 The column of migrants was filmed from the sky as it weaved through fields in Rigonce, Slovenia, after having passed into the country from Croatia.

You'd think they'd be safe now from "war," but for some reason this two-legged locust swarm presses on toward the parts of Europe where suicidal generosity and denial of reality is the worst. "We want Sweden!"


Tens of thousands of people are trying to reach central and northern Europe via the Balkans, but often have to wait for days in mud and rain at the Serbian, Croatian and Slovenian borders.

Mud people covered in mud, worthless sewage used as a biological weapon against Whites. Just be patient, moe-ham-head, you'll get your welfare and access to blonde women soon enough. 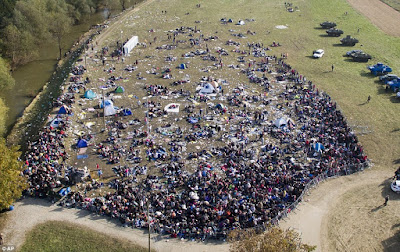 The camp of the saints.

Romania, Bulgaria and Serbia have all now warned they could close their borders if Germany and Austria stop accepting migrants.

No loyalty to your nation or your race, we forsake our common heritage and are cut down piecemeal, maybe we can at least be the last one to fall. Do the dying for us, Germany. If you stop sucking the multiculturalism shotgun we might have to do something. Wax wings melted with the fires of hubris Europe plummets toward the merciless ground below.


More than 680,000 migrants and refugees have crossed to Europe by sea so far this year from the Middle East, Africa and Asia, according to the International Organization for Migration.

Wow, that "War in Syria" sure spread far and wide.


Hungary’s decision to seal its borders left crowds of migrants camping by the side of the road in worsening weather.

This rare display of sanity left moe-ham-head and thousands of other men in their twenties, all with the same first name and basic hostility toward their benefactors, out in the rain. No free stuff, no kuffirs to rape and murder. What a tragedy.


As a result of their new border fencing, migrants switched to Croatia, which also imposed border controls, pushing them into Slovenia.

A game of "hot potato" with worthless islamic scum and assorted brown mysteries.

European Commission President Jean-Claude Juncker highlighted the need for leaders to reach a consensus on the crisis by invoking the plight of migrants as the winter months approach.

You're not getting out of this suicide pact we've all agreed to.


He insisted that ‘every day counts’, adding: ‘Otherwise, we will soon see families in cold rivers in the Balkans perish miserably.’

Oh no, anything but that. Please don't freeze in a river, Turd Eater. That would break my heart.

With winter looming, Amnesty International on Saturday warned of a humanitarian disaster if migrants are stranded at borders. 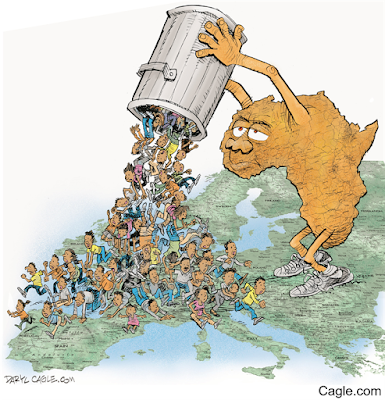 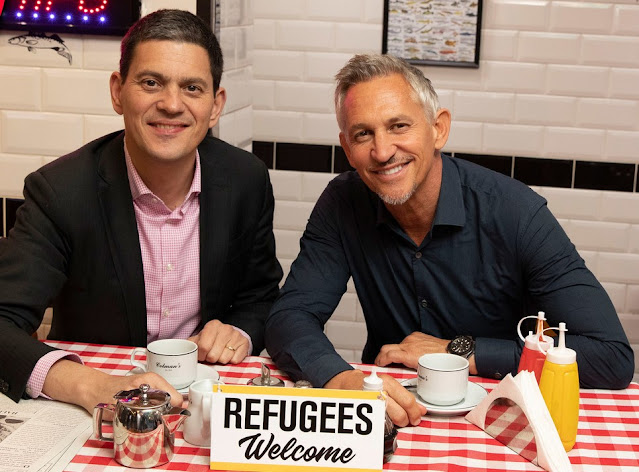 Good news everyone: I found several hundred thousand votes for the phony tough guy under the seat of my car and I'll be delivering them to Michigan, Georgia, North Carolina, Arizona, Wisconsin and Pennsylvania later today (The votes were from these states but somehow ended up together in a giant stack. In my car.). Having saved the total and complete sham of my dead democracy, there's now time to focus on more uplifting topics, like a Cuck Island football Eloi who has obtained the highest possible level of virtue-signaling and Right Think by inviting a moe-ham-head enemygrant into his house for a short time. Well, there goes that argument, bigots! Even though the rapefugee wasn't a big fan of African Grass Hockey, they got along just fine! Please watch the amazing video at the link below. Full Story. Like any epic tale of selfless heroism and courageous stands against the gathering darkness, it began when our feckless last man "saw a tweet" expressing concern that
Read more