January 08, 2016
The American negro is a joke that we're told it's wrong to laugh at, a failure we are told was caused by Whites, a mess that we're supposed to clean up, a child and a devil that should shape up and start conforming to the very modest requirements of civility in today's U.S.S.A. any day now. The "African American" failure is laughably predictable, but noticing this pattern of pathology is, of course, "races" and evil and did I mention there was lynching over a hundred years ago? More recently we've seen a steady stream of deceptions, groveling, appeasement, spending and "more needs to be done" hand-wringing when all of this doesn't change the behavior of an alien branch of humanity that carries the foreign genetics of some long dead failed ape-man. These living fossils don't belong in White nations.

A skirmish broke out between rival activists on the steps of City Hall Wednesday during what had been intended as a demonstration against violence in Newark.

We bee stappin' da violins and sheeeet. What better way to start this noble crusade against the content of the character than with all against all in front of a structure that was built by Whites who are long since dead or fled. Dark creatures straight from a nightmare tear into each other in the New Jersey ruins. This is the future if we fail.

Police were called to the scene after a small crowd began arguing over escalating violence and the city's attempts to curb it.

What remains of the decaying rule of law is pressed into service to keep the non-violent and well-behaved negro "activists" from killing each other right in front of their "No mo' mudda an sheeet, nigga" signs. 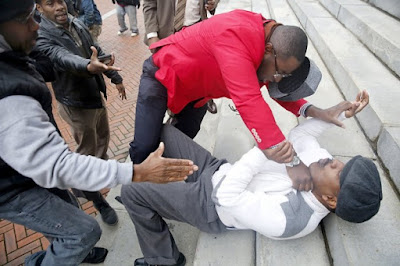 The raw material for a healthy democracy.

The noon press conference was called by a group of activists led by Salaam Ismial, co-chair of the New Jersey Study Commission on Violence, and Abdul Muhammad, a longtime Newark anti-violence activist.

Let's stir in a little Religion of Peace malfunction into the already highly debatable humanity of these evolutionary dead-ends. Moe-ham-head proves its dedication to peace by going ape on its fellow jungle monster. Modern America, now completely parody-proof.

In a release announcing the event, the two said they planned to ask Mayor Ras Baraka to "unleash his quality of life plan in addressing ongoing violence facing Newark residents."


As the group spoke to reporters, however, a group of Baraka supporters including activist Donna Jackson and Tyrone "Street Counselor" Barnes began heckling and shouting from the base of the steps. 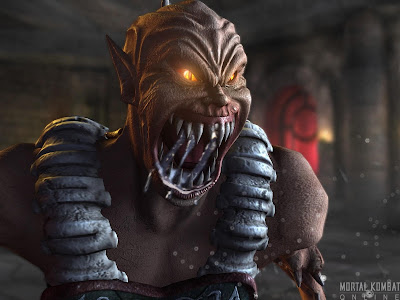 At one point, Barnes put his hands around Muhammad's neck and pushed him to the ground.

Moon cultist/cricket gets throttled by another 70 I.Q. simian. Just another day in the U.S.S.A.


Organizers and other participants said the skirmish lasted only a few minutes, and there were no serious injuries.

Random incident, wrong place and time, not a big deal, go back to your slow death.

In a statement released Wednesday evening, Baraka said the scuffle is being investigated by the Newark Police Department, and that the rally was held without a city permit.

Negroes ignoring laws and causing mayhem? I can hardly believe it. 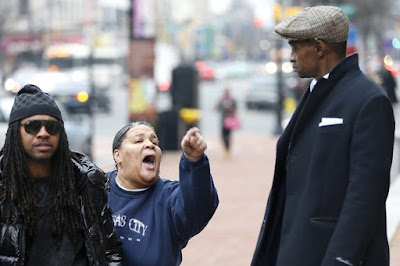 "It was also disheartening to learn that a former Newark municipal employee, Mr. Abdul Muhammad, was the instigator in a confrontation with another well-known Newark community activist and was allegedly pivotal in the ensuing melee," he said.

A worthless alien bounces from one sinecure to another, occasionally getting into melees here and there.


"Today we stood on the steps of City Hall to show that black lives matter in Newark, and it turned out ugly."

You showed a lot more than you could possibly imagine. 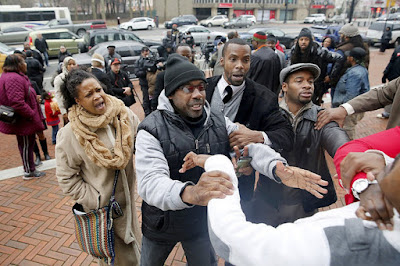