January 20, 2016
Detroit should be renamed Martin Luther King City. It's here, in the former Paris of the Midwest, that the mad fever dream of a communist pervert has come to full fruition. With the Whites that prop up the "minority" malfunction in every other city in the U.S.S.A. either dead or fled all that remains is the content of their character, the endless black oblivion after the fragile light of civilization has been extinguished in the name of winning the approval of a jewish enemy that wants us dead. There is no future and no hope for one, only the long slow slide into the abyss, the steady destruction of what White hands built and the inevitable erosion of whatever vestigial civility remains. An entire city annexed by Africa, the Heart of Darkness in the Midwest, the heavy price for failing to resist the cultural marxists.

Walking through the halls of Spain Elementary-Middle School the temperature quickly changes. A musty smell wafts through the air as a draft comes from the direction of the gym.

The smell of death. The decaying body of the U.S.S.A. splits open, releasing a sludge of blackened viscera and the foulest of odors imaginable. Welcome to Detroit. Welcome to the end.

But there are no children playing inside. The wooden floors are warped from rain damage because roof repairs weren't made. Basketballs lie on the floor untouched. On one side of the gym, the wood has been torn up, but that's as far as things have gotten. 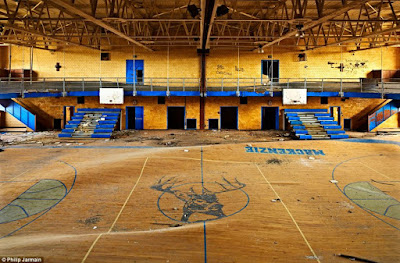 For now the children here play in the hallway; running up and down, bouncing balls.

Well, that's a relief. We'll just let them run wild in the halls, problem solved. I'd lament the fact that no one is learning anything, but let's get serious, there was no chance of that anyway.

Workers at the school say this cycle of neglect is having a devastating effect on the children's future and they are fed up -- with the Detroit Public Schools, the local government and the state. It is why many of the teachers staged a sickout, forcing the school to close for two days.

They should just keep it closed, for all the good it's doing. Better basketball hoops and maybe a pool table is not going to overcome the severe genetic limitations of your average Crabgrass-American. Fifty-plus years of spending, special programs, appeasement, dark faces on everything and aggressively denying reality and the negro is worse than ever. It's time for a one-way boat ticket back to The Mother.

Every criminal-in-training should have the chance to throw $110 textbooks out the window. Destroying used books isn't good enough, we need brand new nice things for the nightmare animals to despoil. And it's sure to lead to improvement! Just look at all the data there is supporting this wasteful lunacy. 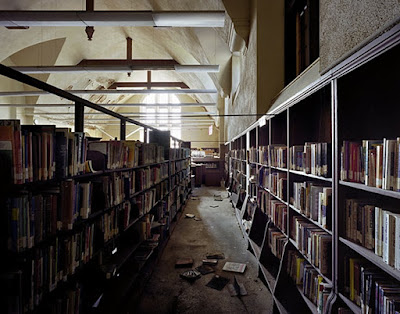 The library, Detroit's only negro-free zone.

"And that is criminal. And those are just the basics, that's the necessities."

An indoor basketball court is now a "necessity." The amazing things you learn from sinecure union swine affirmative action cases. Can't get dat larn on wit no wah to bawl, nigga.


Detroit Public Schools officials say they are working on complaints, but they have to make tough choices and prioritize where to begin because of the district's massive debt.

Normally the White tax-paying sucker would fund these dead-on-arrival idiocies, but they're gone. Come back Whitey, we ain't gots no chedda and we dyin' hee-ah!


"I love these kids, I love them. I love their families. I've taught them; many of their parents were my students." Wilson says. "I'm committed to them."

I love them so much I got a phantom illness for two days so I could get away from the little tar monsters.

She tells us that after the sickout and inspections, along with media attention, improvements began to appear. Two humidifiers now run in the gym. A plastic sheet covers the entrance to the other side of the gym, where exposed ground remains.

Not only is "racism" making it hard for Dajewjuan to get dat larn on, it's also the fault of humidity! Oy, so humid in here! Think of the poor schwoogies. 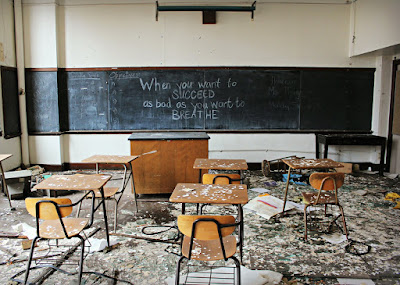 You into breathing, right daw?

The children are energetic inside, frenzied, because of the lack of places to get their energy out without a gym or playground.

Lack of playgrounds, the hidden cause of Big Chimping? Clearly we need federal monies to research this fascinating possibly, because it isn't the foreign DNA and reduced frontal lobe capacity, that's for sure.


"They ask why nobody has come to fix it," she says. She simply tells them, "I do not know, I hope they fix it so you can go and play."

Cargo cult school. Come back White Man from the far horizon, fly down in your magic bird and bring your glorious hand-outs and the good tok tok.

Zdrodowski told CNN that the teachers' sickouts "don't help us in pleading our case for their assistance."

On the other hand it's an empty gesture that got them out of having to deal with the impromptu (c)rap concerts and "she yella" announcements, so at least there's that.


It's in the 20s outside, but it's sweltering in teacher David Kade's fourth-grade classroom. It's better than it has been, he says, noting he's taken pictures of his thermostat at 94 degrees.

But first, let me take a selfie picture of a thermostat. An entire culture of helplessness, of open hands begging for more, of minds that can't master concepts like "tawn dawn dat hee-tah, mudda fudda, we bee bakkin up in hee-ah."


He's got a litany of things students have endured: "Roaches, bedbugs; I mean, you name it, we've seen it. Water pouring down in the middle of the hallway from the floor above because the water fountain ran all night because it was broken."

Preventable problems that go unsolved because of low I.Q. and general depraved laziness. It's like we're in Africa.


"We were the jewel of downtown," he says, recalling just the past five years. "Now, without the extras, more than just the basic education, why send them here?"

Attention Las Vegas, the new over-under for "How fast can the negro destroy something brand new and high quality" will be set at five years.


"Why is it so hard for someone to give us an answer?" she asks. She then adamantly declares her own answer: "Because there's so much crap on top of that answer and nobody wants to take a fall for it."

There's an answer, it's the most obvious one possible and we're forbidden by the State Religion to give it. 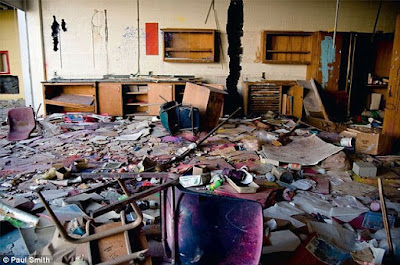