February 04, 2016
The negro is the "we'll be better next year, just wait" of humanity. The next wasteful program, the next ridiculous and pathetic gimmick, maybe pull Whites down, this is sure to correct the genetically-coded pathology of a failed branch of humanity that stalled out at the Stone Age level and still represents the violence and ignorance of that long dark night before civilized man emerged. Still, more needs to be done because it's the right thing to do, never mind the zero percent success rate. Inside Barkevious, somewhere, is a third-rate White just dying to get out, if we'd only recognize this staggering potential and offer endless appeasement in hopes of somehow unlocking basic human behavior in the genetic alien. Perhaps a White do-gooder teacher, maybe not a sodomite degenerate this time, can reach the dark monster via the rich and soulful poetry of the street.

It started with the line, "Of course, I can rap. I'm an English teacher."

Of course I can rap, I'm an English teacher
Paid to fail like a corrupt nigga preacher
Cut up and raped, find me under duh bleacher
I thought I saw humanity in a jungle creature

Yo, let me break you off some Great White Hope
This school a practice prison, I done dropped the soap
In a sane society you'd be on the end of a rope
Societal death be good, go ax the pope

This sheeet as kosher as fresh hebrew franks
Pack attack, those wacky teens and their pranks
Another stagger toward the national grave
I be wiggerin' it up, I'm sure you'll behave

Of course I can rap I'm an English Teacher
Class full of monsters, horror movie double feature
Silly azz gimmick is sure to reach ya
I'm gonna fix the genetic failure of a nightmare creature

Word to The Mother.

"When I was student teaching, I wrote the first rap because a student challenged me and said he didn't think I could rap," said Krzewski, informally known at Kalamazoo Central High School as Ms. K.

The impressive intellectual rigors of the public school in today's U.S.S.A. 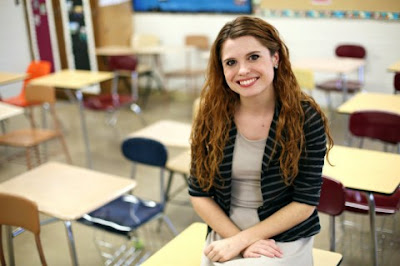 But she explained that rap is poetry. It is written in verse. And the use of words is kind of a specialty for an English teacher.

Ah! Ah! Nigga bodies! or the staggering achievements of White literature, it's all basically the same stuff and it's "races" to pretend otherwise.


"So I went home and wrote a rap," she said. "I was making fun of myself ... mocking myself and trying to be cool with the kids. But I was also trying to learn their language."

Debase yourself and look weak, that should win over Dajewjuan and his fellow Homo erectus "crew."


This year, her quick, one-line response to that challenging student, grew to 2 minutes and 23 seconds worth of lines – another rap for another class of students that is trending well on Facebook.

Wow, even doing "well" on Jewbook. Every generation gets the "Dangerous Minds" it deserves.


But she had to learn the slang and phrases that teenagers use in order to make her rap work and to try to get the sophomores she teaches to take a deeper dive into literature and poetry.

When you said "She yella, dat beech bee yella," La-ah, what exactly did that mean? Help me to understand your vibrant and thoroughly intellectual street language.

The kids' slang she used two years ago in her first rap is now dated or obsolete for kids. That includes "swerve" (meaning to get out of someone's way or change the subject), "cutting up" (acting crazy), and "throwing shade" (putting someone or their accomplishments in a bad light).

I hate to throw shade on cultural marxism victims, but this woman is well and truly cutting up. Let's swerve, I'm getting sick of talking about this.

I'm not sure what the African American Vernacular for "found dead in a recycle bin after being raped" is, but I have a feeling we might need it soon.

With rap, she said, "I knew that I would reach a lot of kids who I probably wasn't going to reach with Emily Dickinson."

Sheeeeet, wut you talkin' bout beeach. I luv to get muh dikk in some.


After hearing mine, they were all excited to share their own stuff, and they wrote some awesome poems.

Mainly rhymes about using narcotics, shooting other negroes who were sitting in cars or walking down alleys and raping and murdering White women, but it was really full of artistic merit, trust me. 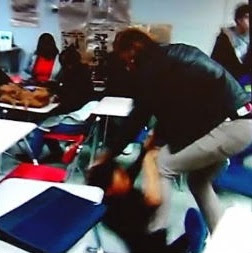