An Increase in Overall Persecution

March 24, 2016
In muh democracy the smiling faces and skilled teleprompter readers we endorse are supposed to represent our interests. For some weird reason that it would probably be best not to investigate this simply doesn't happen and we see some truly bizarre contortions from our elected criminals even as our nations die. Rapists, drug pushers and welfare colonists pouring over an open border? Better remind the people that voted for me that they're "racist" if they have a problem with this.  Cities in flames and eroding rule of law? Time for more negro appeasement. Whites starting to notice the planned demolition of their homelands by a tiny, insular and completely alien minority? It practically goes without saying that it's time to deploy the task force for combating "anti-semitism," the  2 + 2 = 5 squad whose main job is papering over jewish crimes and blaming the White victim.

In 2015, the terrorist attacks in Paris drew overdue attention to the resurgence of anti-Semitism  in Europe.

First of all, please update this to include the latest moe-ham-head detonations in a White homeland. Next, let us appreciate who the real victims of the moon cult jihad truly were. It certainly wasn't all those dead Whites. No, it was the innocent and patriotic moose-limb invader who will now, at least in theory anyway, be unfairly vilified by "racist" Whites. And, of course, the traveling merchant responsible for the moe-ham-head invasion in the first place, the jew that played a leading role in this sickening national suicide and now might be resented. This is what needs to be done, protecting the hurt feelings of various criminal outsiders even as the White victims are forgotten and pathetic candlelight vigils where we mumble impotently about "love" are performed.

Also a growing problem in other parts of the globe, anti-Semitism threatens not only Jews but also other minorities, and societies themselves.

Society itself is threatened by noticing the pathology of the jewish nation-wrecker, to say nothing of the precious biological weapons shylock is using to destroy the West. I mean, can you imagine the societal nightmare of a homogeneous White nation? The horror, the horror. We need the jew spreading spiritual poison and the human locusts it uses to attack Whites.

Left unchecked, anti-Semitism leads to an increase in overall persecution and repression.

Then they came for the jew and I said "It's about time."

Today marks the one-year anniversary of the U.S. Congress’s Bipartisan Taskforce for Combating Anti-Semitism, which has already stacked up considerable accomplishments.

Here's what you get for your shekels, White tax-paying sucker. Considerable accomplishments! The world has gotten much better since the formation of this Thought Crime group by the criminals in our government, it's obvious to anyone with eyes.

In the coming year, Congress should rededicate itself to countering the resurgence of anti-Semitism  in Europe and around the globe.

Based on the amount of suck-ass on display at the AIPAC conference I'd say it's likely.

In December the taskforce joined the State Department in protesting Hungarian Prime Minister Viktor Orbán’s plans to install a statue commemorating Bálint Hóman, a notorious WWII-era politician who collaborated with the Nazis and helped kill hundreds of thousands of Jews during the Holocaust.

I guess this is one of those "considerable accomplishments" we were promised. A statute commemorating a man who personally fed an entire bizzlezillion precious g*d's chosen into the gas ovens? Big jew and its American golem swing into action to censor the past and control the future.


But today’s anti-Semitism takes many forms, from the desecration of Jewish cemeteries to Holocaust denial to violent assaults on people wearing kippot.

Stop noticing our hands around your throat, goyim!


It is also the daily aggressions that make people conceal signs of their Judaism and send their children to a Jewish school rather than a public one.

Yeah. I'm sure you send little Abe to the #6 nose school instead of a public one because of the "daily aggressions" from the groveling unclean meat you rule over and not because the public school is full of rich and vibrant "diversity" like a 350 lb. negress with three children at the age of 16 shrieking about "you bee yella" or Barkevious hopping up on a desk and "rapping" about its genitals.

The taskforce has organized a series of briefings to educate members of Congress and their staff on important dimensions of contemporary anti-Semitism.

Let me educate you. Here's how your jewish masters want you to vote, shkotzim.


Here are three things the taskforce—and the Obama administration—should focus on:

Closing the border, halting immigration and getting our national debt under control? No silly, we need to appease the jewish tape-worm bloated to the size of a large snake in our national intestines.


First, speak out forcefully to condemn the most severe anti-Semitic incidents, as they arise, and promote heightened bilateral engagement with countries where violent attacks are particularly common, such as France.

You're not dying fast enough, El-France! Get in that hole!


Second, promote a regional approach to the problem.

We'll teach you how to spy on and report your neighbors.

Here's a big kosher payment from American tax-paying chumps to help the European Economic Union learn to be more inclusive, as if the present amount of cuckoldry is somehow insufficient. You really must learn to be more tolerant. Oops, an airport just blew up.


Congress has a critical role to play in helping to build strong inclusive societies, free from violence and discrimination.

Please ignore the fact that we could easily achieve this by deporting the non-White aliens. 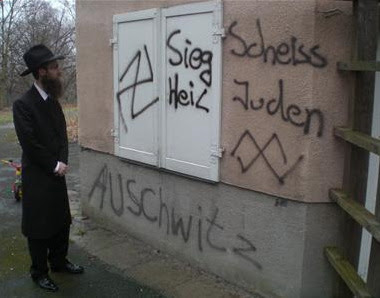