March 18, 2016
There's something wrong with the voters. They're supporting nationalist candidates and those on the "extreme right." Clearly the solution is to explain to the average White in no uncertain terms that what they're doing is very wrong and for a free and democratic society to prosper you must support a very narrow spectrum of opinions endorsed by a tiny and wildly unrepresentative jewish minority. After all, the nation-wrecker that wants you dead certainly has your best interests in mind, so the Crime Think and Vote Crime needs to stop right now. Open borders are good, just accept this without any evidence because none will be provided. Your death is good. Please die, goyim.

German Chancellor Angela Merkel has vowed to continue her open-door migration policy — despite heavy losses in regional elections that were widely regarded as a referendum on that very policy.

Germany attempts to vote itself out of an unbelievable jew-authored mess. Good luck. Obviously the criminal government is not interested in your objections. Be silent, pay your taxes, keep working for your own destruction, don't have children, get displaced by invading scum. Suck on the "diversity" shotgun, it sure tastes great.

Facing a clear and present existential menace in the form of foreign invasion, attacks on White women and ultimate cultural and demographic displacement we were able to find some Germans that aren't total and complete cuckolds. Maybe even double-digit percentages worth of them! You are aware you can still vote for whoever you want, at least for now, aren't you Germanistan?

In a press conference after the election results were in, Merkel remained defiant. She reprimanded German voters for questioning her handling of the migration crisis: "There are people who did not listen to us at all and simply cast protest votes.

How dare you not support White genocide and offer timid resistance to an organized attack on your homeland, family and way of life. We've got to solve this "migration crisis" by allowing in millions of moe-ham-head invaders. Stop misbehaving with your little elections and get in that hole.

The elections were the most important in Germany since Merkel allowed more than one million migrants from Africa, Asia and the Middle East to enter the country in 2015.

Man, that "war in Syria" has spread everywhere! Better get all those "women and children" into our dying nation. 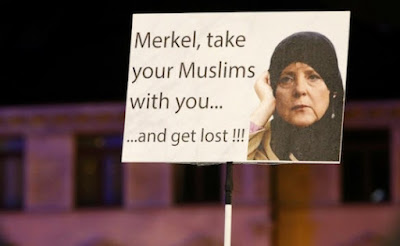 The AfD was founded as a Eurosceptic party in 2013 by German economists advocating the abolition of the European single currency, the euro, and opposing financial bailouts of profligate eurozone countries such as Greece, Italy, Portugal and Spain.

The death rattle of the European Economic Union.

Merkel's migration policy is causing security mayhem in Germany, where mostly Muslim migrants are raping and assaulting women and children with virtual impunity.

Sure there's that, but on the other hand we earned the approval of the jewish alien parasite and a temporary rush of good feelings before stupid old reality wrecked everything.

Other political and media elites are ramping up a months-long campaign to delegitimize AfD voters as agitators, arsonists, far-right extremists, fascists, Nazis, populists and xenophobes.

German media are also churning out stories — many of which are based on hearsay — aimed at discrediting the AfD. The magazine, Stern, published this headline: "Reports of Nazi Songs at AfD-Election Party."

Sixty Subblezillion precious jews up a chimney! Not-see songs! If this doesn't convince you to support your own annihilation I don't know what will. 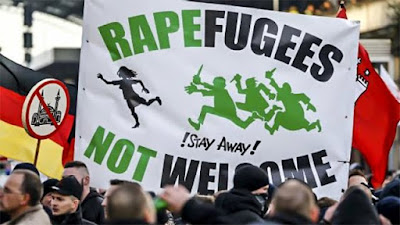