April 22, 2016
We lost our freedoms the day the jew taught the negro it could extort concessions from endlessly generous Whites. Since then it's been one ridiculous attempt to deny reality after another. Clearly the latest "money fo' dem pograms" will be the magic bullet that fixes the genetic alien. Obviously our eyes are lying to us when we observe this helpless and evil failed race when left to its own devices. It goes without saying that more needs to be done. And here we are, after over fifty years of pathetic negro appeasement and the tar monster hasn't made any discernible improvement. But those evolutionary dead-ends sure can jump at a loop in African Tree Hockey! This valuable skill more than justifies all the wasted money and shed blood and it's certainly a compelling reason to invite African sewage into our dead nations and let these dangerous animals pretend to be high school age.

It’s hard not to notice Jonathan Nicola on a basketball court. At 6-foot-10 with size 16 feet and sporting fully-established stubble, the 17-year-old Grade 11 Windsor, Ont., hoops star stands out among the crowd of high schooler.

With its coal complexion, wide uncomprehending yellowed eyes, brow ridge and muzzle this evolutionary dead-end certainly stands out, even in a sea of Canadian mulattoes. Let's all cheer this anthropological curiosity as it goes for the big "slam dunk."

Like the plot of a terrible movie, Nicola is believed to be an adult masquerading as a high school student at Catholic Central High School in Windsor.

The West in Current Year certainly resembles the plot of a terrible jewish celluloid bowel movement and this is not a coincidence.

According to the Canadian border services, Nicola, a recent refugee from Sudan, isn’t 17. He’s 30. And, now, under arrest, currently being held at the South West Detention Centre.

Age 30 "teen," just like the ones picking at the ruins of Detroit or engaging in tribal warfare in the Chicago all against all. Somehow this piece of foreign garbage might actually be removed, something that normally requires an Act of God in most decaying White nations.

In a previous feature story, Nicola had told the Star that he had fled Sudan amid war and turmoil in his native country, first arriving in Windsor in November 2015

Women and children, good little fuzzies that are just sun-tanned Whites. That war in Syria sure has spread far and wide. 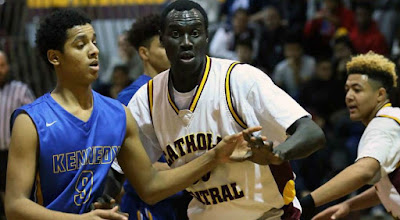 As part of the Canada Homestay program for foreign students, Nicola had been living with Catholic Central Comets high school basketball coach Pete Cusumano, who is retiring from teaching at the end of the school year.

Why am I not surprised that the cucklick "church" was involved in this debacle. Come into my home, adult jungle savage! Here, this is my wife and daughters. I'll look at the wall and do a thousand rosaries.


“There’s really not a whole lot to say,” said spokesman Stephen Fields. “Because of the fact this is a matter that’s still outstanding before the federal authorities, obviously we can’t really comment on it.”

Everything is fine, please resume drinking yourself stupid and worshiping sports negroes.

He also wouldn’t discuss whether the board plans to alert students and parents about the situation.

I don't think you need to know that an African invader nearly twice the age of its classmates has been turned loose on your children. Besides, look at that morlock hoop the ball!


Nicola and the Comets finished the 2015-16 season with a 25-10 record before losing in the WECSSAA championship game. 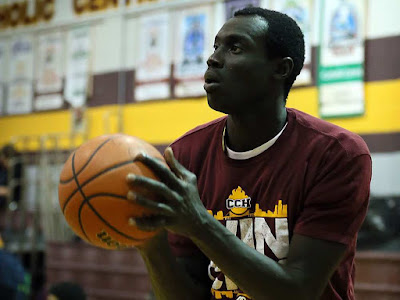