August 31, 2016
If you want a steady stream of encouraging stories from Europe you usually need to cross the Oder river and keep heading east. Here you'll find hope and a glimpse of the better world to come after the jewish enemy is defeated and the brown alien hordes are removed. In Latvia an ugly communist monument came down. I can't wait for the day this happens in the restored U.S.A. I imagine a giant wrecking ball repeatedly smashing into the Martin Luther King memorial, reducing the Chinese rock to dust, giant cement lips exploding into powder, the ugly propaganda of our enemy laid to waste. We are the future and we will sweep aside all the lies we were told about the past.

The false song of globalism rejected, the jew lies laid to waste. No more guilt over imaginary crimes, no more pretending that soviet criminals were actually worthy of our respect. 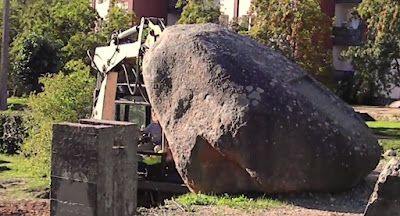 This ugly rock was put there by soviet jews to humiliate the local population. Now it's gone.

The monument, which was erected in 1974 near the town's school and created in the shape of the hull of a ship, was dedicated to Soviet seamen who died in the first weeks of World War II while fighting local Nazi collaborators.

Make sure to build another repellent "memorial" for the nawrtzee atrocities in the Katyn forest, or the electric belt victims of the holohoax. Nothing but lies from the devil's children, the traveling merchant, the outsider in whatever land it infects, the jew.

Leave it to the stupid old truth to ruin a perfectly good banker tall tale. 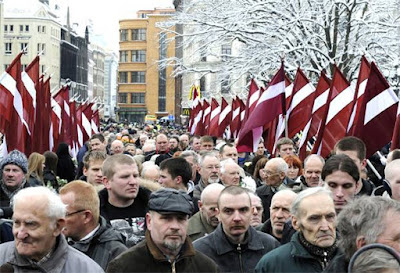 Whites waking up in Latvia.

DV was founded in 1945 by former Latvian members of Nazi Germany's Waffen-SS and continues to support SS veterans and their families living in Latvia.

Hopefully we'll see this in Germany itself, soon. 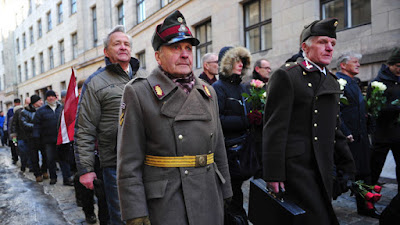