August 03, 2016
Please watch the following amazing video from the always excellent "Face of a dying Nation" channel. Be sure to make copies and distribute it far and wide.


What you're watching is the death of the West. A terrorist attack in El-France by "migrant" moon cult scum that received zero media attention when it occurred about a week ago. We're long past the point of praying for [most recent formerly White city to experience the cultural enrichment of the Religion of Peace] and putting up little flags over our duck-face selfies on jewbook. The new plan is to completely ignore the mudslime pathology. We're just going to have to get used to it, because we don't want to hurt the feelings of dog shit foreign profiteers waving muh constitution like the scrap of toilet paper that it has become. The occasional allahu akbar outbreak that's memory holed is a small price to pay for all the benefits of moose-limb invasion like...grab ass? I can't think of any off the top of my head but I'm sure there are plenty.

Learn to forget, Whitey!  That bus explosion? Never happened. Park yourself in front of your sports, drink your booze with the little "U" on the bottle, sit in a helpless stupor. Soil yourself. Try to ignore the fact that your formerly healthy and prosperous nation is literally burning, that the enemies are inside the gates. Maybe lament your own failings, the double-secret "racism," the failure to sufficiently love big jew. Stagger toward the grave. Imagine there's no countries, a cultural marxist zoo. Boom goes the dynamite. Fire and chaos, a scene from Lebanon in a terminally ill Western country.

And there it is: animal noises, Dark Age barbarism, burning buses to go with all the burning cars. This is what your feckless and suicidal generosity has bought so far. The real bill is still waiting to be called in, perhaps with a mushroom cloud. At least we weren't "races" or "xenophobic" or "Afrophobic" or whatever other anti-White kosher slur is currently popular. We'll earn that epitaph craved in crumbling stone that says we were bad and evil but not completely and our worm-eaten remains will rest happily beneath it. Had enough? Wake up. 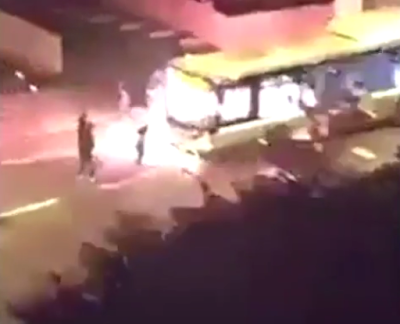