October 17, 2016
The coming election is going to determine if any salvation remains for the legacy American rump-state short of complete collapse and the horrific violence that would follow. Worse is not better, it's worse. A series of defeats will add up to extinction, not victory. In the last several months more and more Whites are showing a willingness to stand up to the rot. Now is not the time for cowardice and apathy. Our jewish enemy has increased the attacks to unprecedented levels. We're now seeing suppression, lies and open attacks within the rotting body politic, the final failure of muh democracy. Whatever the result of the 2016 election the Rubicon has been crossed. The U.S.S.A. is gone, the scramble begins to replace it with a brown consumerist hell or a reborn American ethnostate. The fires have already begun to burn, fires in the minds of awakened Whites and flames of hate crudely deployed by our enemies.

Gov. Pat McCrory Sunday called the weekend firebombing of a North Carolina Republican headquarters “an attack on our democracy,” while one GOP official called it an act of “political terrorism.”

A legitimate hate crime has actually occurred and, big surprise, communists were the perps. Suffice it to say this incredible attack on our dying institutions was given little attention from our kosher media. This is the end of good little citizens carefully weighing the issues and casting a ballot that isn't cancelled out by fraud. These are the final days of anything resembling a meaningful representative system. The endless dark night of tyranny looms large. Raise your hand if you don't want to live in a burning semitic ruin populated by nightmare monsters. Sorry, you lose.

I didn't think it was possible to like Trump more than I already did, but it just happened. Animals. This is the hero we don't deserve.

A swastika and “Nazi Republicans get out of town or else” were spray painted on the side of an adjacent building. No damage estimates were available.

How to identify a real hate crime in a few simple steps:

1. The victim is not considered "more equal" by our criminal government.
2. The swastika is correctly drawn, for once.
3. Actual property damage occurs, not crime-words on a dry erase board.
4. The jew-run media doesn't care.
5. If you're still not sure, here's plenty of phony hate crimes for comparison purposes. 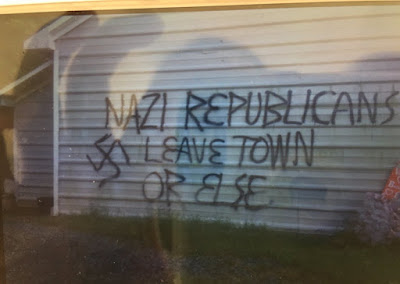 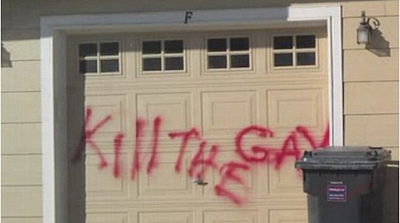 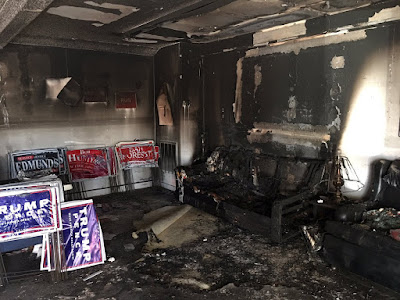 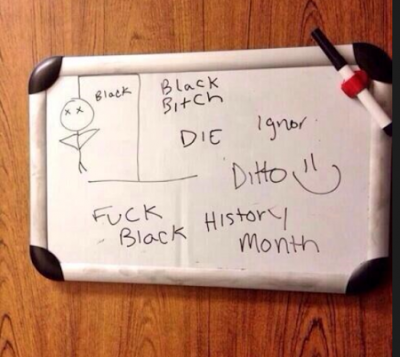 And I'm proud to be an Amurr-kwan, where at least I pay a fee...


The flaming bottle, which Woodhouse described as a significant Molotov cocktail, and bomb, was thrown through a window that bore the words “Freedom spoken here.”

The cultural marxist enemy, insane and destructive. We let them take over our country.


Volunteer Bob Randall was there to clean up Sunday. He said he believes that the bombing was an act of political terrorism and that it would get people angry and motivated to vote Republican. “The idea is to intimidate us, to make us crawl back in the shadows,” he said. “But I think it’s going to backfire on them.” 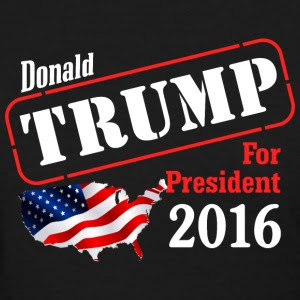