October 24, 2016
Earlier this year I discussed a story from Austria involving a rapefugee invader and its "sexual emergency." The solution was brutally sodomizing a boy who had to be hospitalized after the attack. As expected this entire vomit-inducing tale of cowardice, weakness and a pedophile desert cult claiming war trophies was quickly sent down the memory hole and I didn't really ever expect to hear anything more about this appalling incident. You can imagine the surprise when not only did it come back on the radar but returned as a fresh outrage. An Austrian court is now attempting to get moe-ham-head released because the enemygrant isn't compatible with our White civilized nations and as such can't be held to our legal standards. This is a very wise and sane conclusion the is undoubtedly going to have a positive long-term impact on your rapidly dying homeland.

An Iraqi asylum seeker who confessed to raping a 10-year-old boy in a swimming pool, claiming it was a "sexual emergency", has had his conviction overturned.

No, really. This happened. R.I.P. Austria.

In a truly shocking twist the Supreme Court decided the grown Iraqi man may not have realised the 10-year-old did not want to be sexually abused by him.

The talmudic reasoning is really amazing. Maybe the sand monster didn't hear all the screams or see the blood or whatever. Come on, use your imagination! This court should be congratulated for its wise ruling and I would definitely encourage nationalists to meet them and tell them what a fine job they're doing.

Amir A, 20, was visiting the Theresienbad pool in the Austrian capital of Vienna last December as part of a trip to encourage integration.

We're not even going to get a full name for this piece of shit. Well, not like it really matters, it's just another locust in the swarm. It could just scribble "moe" on the scrap of toilet paper it just used to wipe itself and that would be sufficient identification and vetting for a jew-ruined nation that has allowed itself to be conquered by an enemy army without even the slightest resistance to this suicidal disaster. We didn't want to be called names.

When the youngster went to the showers, Amir A. allegedly followed him, pushed him into a toilet cubicle, and violently sexually assaulted him.

You're opposed to allowing another few million of these monsters into your tiny nation? Must be "xenophobia."

The mind and anti-soul of the moose-limb pedophile. This worthless monster didn't even have the sense to attempt to flee after raping a child nor did its 80 I.Q. mind experience the slightest remorse for this vile horror. These are our equals, they're going to save our pensions and muh GDP, the traveling merchant would never lie to you.

Welcome to Europe where we protect the identities of child rapists.

Yeah. I would imagine. If this doesn't fill you with righteous anger against the foreign opportunist and the jewish enemy within that opened the gates for the moon cult invasion you've lost your soul.


However, in a bizarre twist, the Supreme Court yesterday overturned the conviction, accepting the defence lawyer's claim that the original court had not done enough to ascertain whether or not the rapist realised the child was saying no.

Apparently in Austria a 10-year-old child can consent to violent sodomy from a alien jihadist. Let it all burn.


According to the Supreme Court President Thomas Philipp, while the verdict was "watertight" with regard to the serious sexual assault of a minor, there was not enough evidence to support the second charge of rape.

This unbelievable outrage is the end result of decades of jewish spiritual poison. I don't know what else to say. This is fucking pathetic.


The appeal court said the initial ruling should have dealt with whether the offender thought that the victim had agreed with the sexual act, or whether he had intended to act against his will.

Why would this even matter? He was ten. He went to a hospital afterward. What in the blue hell is wrong with you, Europe??? Sometimes I think you're not even worth saving and this is definitely one of those times.

A court had previously awarded the child's family £3,700 (€4,700) compensation, after prosecutors described the boy as suffering both physical injuries and "profound depression".

Here's a few shekels, now pretend none of this happened and remain silent as everything your ancestors built is pulled down and ground to dust.


The case sparked outrage across both Austria and Europe, causing a backlash against migrants which saw support for anti-immigration groups rise as a result. 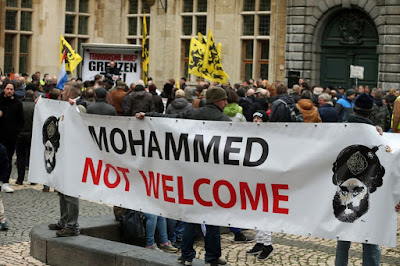