October 07, 2016
Please watch the following amazing video. Be sure to make copies and spread it far and wide.


There's nothing like a hurricane to bring out the content of their character, from the New Orleans all against all to the monkeyshines witnessed above. You're doing a heck of a job, brownie. A fat negro sow, bloated by your tax dollars, brawls with a relatively svelte evolutionary dead-end. It's going down. A civilized White nation dies and is replaced with Africa, nightmare animals batter each other for a bottle of water. These are our equals. They're just one more wasteful program away from becoming cut-rate Whites.

Two women became embroiled in a brutal scrap over the last case of water in a supermarket ahead of Hurricane Matthew , it's reported.

It looked more like two blobs of tar that had somehow put on human clothing, two lumps of shit that fell out of the jewish anus that is today's U.S.S.A.

The can be seen repeatedly battering and pulling each others hair in the middle of a Walmart store, apparently after one of them put the store's last water bottles in her trolley.

Here we see a brief glimpse of the coming collapse, when the Whites are gone, when there's no more shekels to borrow, when the kosher illusion melts away and the horrible reality that was always there becomes impossible to ignore. Battles for a bottle of water, throats slit over the possession of cigarette butts, living fossils turned loose against the backdrop of burning buildings, a cannibal state. If we fail, this is what will replace us.

The taller of the two women then grabs a trolley and starts ramming it into the other woman, forcing her into a display unit where she crashes into several boxes.

The content of their character. These are just over-cooked Whites, Sun People full of goodness and virtue.

She then turns and starts throwing the packages at the woman behind the trolley, who in turn charges towards her.

For a moment I thought I was watching the negro ball. Look at these heroes crash into each other, not deporting them was clearly the correct decision. Please put your dark fist in the air and take a knee for our anthem.

But before she reaches the smaller woman they then separate and go in different directions as the argument appears to be over.

Just another day of spreading necrosis in the American cadaver. Another isolated incident, a random occurrence, nothing to see here. 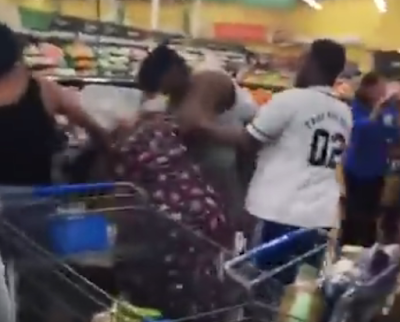 Gibs me dat wadda.
All Against All Content of Their Character Florida Hurricane Matthew Pathology of the American Negro Walmart We're Not Equal YouTube