When the Germans are Gone

October 21, 2016
The incredible prosperity and success of White nations is not some fluke of fortune. It wasn't caused by climate and latitude and we don't owe it to germs and steel. The desire to conquer the natural world, to build great civilizations, to discover and understand, these are written by a divine hand in our genetic code, just like the negro is programmed for failure. This is common sense, something every intelligent person understood a century ago. Today it is a crime to speak these words in many dying White nations. The foreign invaders flood in and then are shocked to discover that after the indigenous Europeans are dead or fled the same pathology that crippled their desert homeland settles in and everything falls apart. Genetic determinism is real, "doing the right thing" is a social construct.

German migrants are hitting out at Angela Merkel's open door immigration policy and the influx of NEW migrants saying it has wrecked their standard of living.

A certain percentage of White dupes is necessary to stave off the collapse into the barbarism and ignorance that typifies the enemygrant. Without the tax-paying sucker, without the good little citizen to keep the lights on, the heart of Europe transforms into Somalia. Even the brown sewage is starting to dimly become aware of the fact that if the parasites actually kill the host organism the party is over.

And the shocking comments show the scale of resentment brewing in the country as its tries to cope with an influx of millions of people.

"Diversity," our greatest strength. Resentful shit-colored animals tearing into each other in the ruins of a civilization they can't build or even maintain. Our heritage flushed down the moe-ham-head toilet so we can have endless war between various identical looking and behaving sand people. At least this proves we're not "races," as one dark rapefugee attacks another because there are no Germans left to prey upon. We can smile up at this self-inflicted disaster from our graves, at least until the rotting flesh causes the jaw to fall off.

Last year Germany welcomed 1.1 million people alone but millions more have flooded into the country over the past five years.

Unprecedented and unbelievable national suicide. An enemy army strolls through open gates, centuries of unique culture and history destroyed in a few months, cowardice and sanctimony the only virtues that remain. 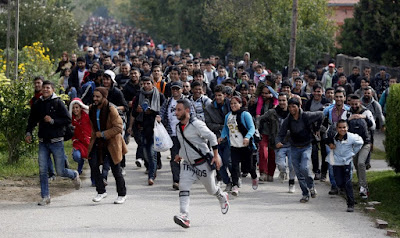 Now foreign nationals who have lived in the country have expressed their concerns about the impact it is having on their standard of living.

That feel when a foreign alien has more sense than the native population.


While another woman who wore a bright hijab said: “It’s become a little… terrible around here. Not like it used to be.”

The halcyon days of leeching off the insane generosity of the vanishing White population are over. Now the endless night can begin. There is no magical soil to turn moe-ham-head into a good little consumer, no program to miracle a 60 I.Q. African into something resembling a human being. The jewish nightmare begins. It's terrible here.

Another individual who said he had been in the country for two decades said the city is changing dramatically.

Must be some crazy coincidence because a rat-faced man told me everyone was equal.

He said: “I’ve had my market here for 20 years. "It used to be good people around here that bought my goods."

Muh shekels. No one is left to enjoy all the foul-smelling exotic food that is the main argument for "diversity" that doesn't involve empty appeals to emotion.

"The Germans all moved away."

Soon there will be no place left to run. Every last White must be hunted down.

“But the foreigners who come now, the ones who came two or three years ago — they’ve caused so much s**t in Germany." 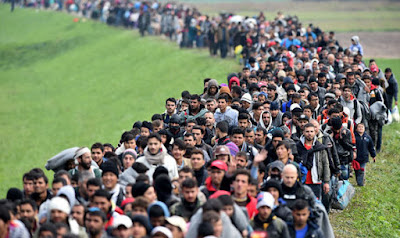