November 18, 2016
What will be the lasting legacy of the purple-lipped mulatto sodomite? After a few quick signatures from President Trump most of the damage caused by the tragic half-breed will be undone, and what remains will be cut out like the malignant tumor of jew communism that it is. The Kenyan queer will become a historical footnote, the answer to a trivia question. Did you know that America elected a foreign born mystery meat to its highest office right before the new golden age began? No, really, it happened! Who would even believe it, that there was a time when debased Whites installed a stuttering jewish puppet from Indonesia. It already seems unbelievable and it hasn't even formally ended yet.

President Obama, speaking at a press conference in Germany, passed up the opportunity Thursday to tamp down the anti-Donald Trump protests back home -- urging those taking part not to remain "silent."

I could not agree more. Keep soiling your own nest, keep on vandalizing and staging phony hate crimes. Be sure to affirm your allegiance to black lives matter, to the moose-limb death cult and to more foreign invasion. This will definitely win normal America back to your side, cultural marxists. Keep reminding us why we voted against you, it's really important.

The president fielded a question on the protests during a joint news conference in Berlin alongside German Chancellor Angela Merkel.

Two vile globalist puppets sing their false kosher song. Germany is being destroyed, America has a chance at redemption. Please go back to the old failed nation-wrecking policies, shkotzim.

"I suspect that there’s not a president in our history that hasn’t been subject to these protests," he answered. "So, I would not advise people who feel strongly or who are concerned about some of the issues that have been raised during the course of the campaign, I wouldn’t advise them to be silent."

Yes. Scream your blind irrational hatred of Whites at the top of your lungs jews, negroes, la-teen-ohs, moon cultists and useful idiots. Someone hasn't been reading his Saul Alinsky. Our enemies are self-destructing and it's absolutely glorious.

He added: “Voting matters, organizing matters and being informed on the issues matter.”

Asked about the president’s reaction to those carrying “He’s Not My President” signs, White House Press Secretary Josh Earnest said the freedom to protest should be “exercised without violence” but that “it's not surprising that people are disappointed in the outcome, but it's important for us to remember, a day or two after the election, that we're Democrats and Republicans, but we're Americans and patriots first.” While he expressed cautious optimism Thursday that Trump would be an ally to Europe, Obama advised the president-elect to avoid simply taking “a realpolitik approach” with Russian President Vladimir Putin.

We still want that nuclear confrontation, after all. The jew said it was a good idea. Avoid common sense, g*d's chosen wants to see our cities reduced to atomic ash.

Obama also suggested Trump not “cut deals when convenient,” and he urged him to stand up to Putin when Russia’s values "differ from international norms."

I'm so glad this piece of shit is about to be placed on history's ash heap. Here's your legacy, Soetoro: "After a series of weak and forgotten presidents at the end of the disastrous jewish century Donald Trump was elected."

Obama also argued social media can erode a democracy, after a campaign in which the candidates' Twitter accounts -- especially Trump's -- acted as their own broadcasting outlets.

“If we are not serious about facts and what is true and what is not. Particularly in an age of social media when people are getting their information in soundbites and snippets ... if we cannot discriminate between serious arguments and propaganda, then we have problems,” he said. 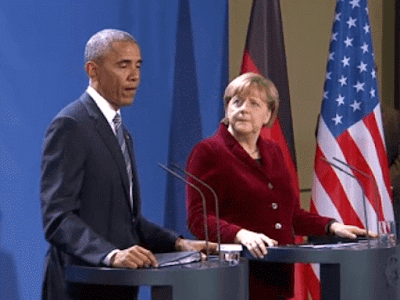