November 14, 2016
Please watch the following amazing video. Be sure to make copies and spread it far and wide. This is not the sort of thing our liar-press will be covering, after all.


The anti-Trump zoo, the defeated losers on the wrong side of history, the bigots clinging to their false ideologies of globalism and communism, cause property damage in the name of nihilism. Newspaper boxes are dragged by a hooded young man in the process of turning his life around. Take that Electoral College! You accomplished a mighty good by doing that, faceless, mindless and worthless every-man. This is how the jewish century ends, not with a bang but with wailing sobs.

A mystery meat punches a car window a few times, before realizing it isn't breaking and it hurts to slam your hand into unyielding glass. That time at the communist indoctrination center is sure paying dividends in responsible behavior and critical thinking skills. A piece of leftist dog shit smashes an electrical junction box, earning some "woo!" from its fellow garbage people. This will definitely reverse the will of the people. Destroying public property will win hearts and minds and the evil not-see Drumpf will be forced to step down after this display of infantile pathology, that's for sure.

A cultural marxist useful idiot smashes a television at a bus stop. Wow, love sure trumped hate. Now the poor people, many of them people of color, will have to watch the morning news on a cracked screen. What a hero. We get a close-up of the screen that was damaged by love and a sincere affection for every human unit on g*d's green earth. You can also note all the graffiti placed there by the creative and decent POCs I already mentioned. It's a fitting epitaph for the false song of globalism that was emphatically rejected at the polls. 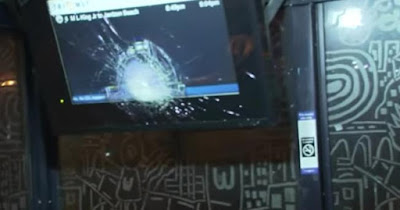 Showing the deeply spiritual (not religious!) connection to the natural world that typifies the supporters of the party that will protect us from global warming cooling climate change a "protestor" tries to set a tree on fire with a road flare. Earth Day comes early in Portland, as we love our mother, that is Mother Earth. A hand covers the camera. "You guys know the drill." You must present this pathetic and destructive rent-a-mob in the most positive light possible, come on.

"This is not what this protest is about!" someone lisps. Well, glad that's cleared up.

Newspapers burn. "Yeah!" Setting fire to one of those "apartments for rent" free papers is going to be the magic bullet that stops Hitler 2.0, just you wait. An ugly negro monster ambles into frame, muttering something about "squat, squat." When a 70 I.Q. morlock is actually behaving better than most of the human waste surrounding it you know you've done a great and noble work for muh democracy. 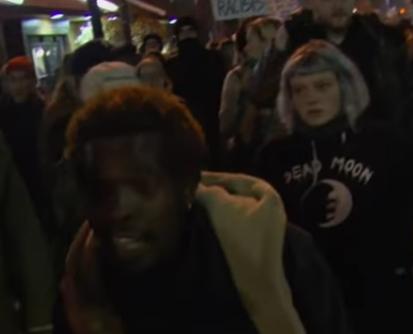