December 05, 2016
It's rare these days to talk about Chiraq without using phrases like "tribal warfare" and "living fossil shot while sitting in a car" but via the miracle of communist tantrums and a clueless media we're going to be able to do just that. In a city better know for the all against all between various shit-colored hominids stickers featuring incorrectly made swastikas are popping up. Clearly this must be blamed on our next President and not the degenerate cultural marxists that are, you know, actually making them and putting them up. Yes, it's cognitive dissonance time in Rahm's plantation as the liar press goes into impressive contortions to put the "Hey rabbi, watcha doin'!?" blame on normal White America.

South Loop residents are reporting a rash of swastika stickers throughout their neighborhood.

Nawrtzee symbols are being affixed to decaying ruins! Finally something worthy of national coverage, not like when Barkevious got smoked while standing in an alley or when Pablo's body got some new cooling vents put into it by its fellow "they have to go" criminals.

City workers have been "very, very good" at removing the swastika stickers from street signs and other places in the Downtown area, said Kevin Lampe, a spokesman for Ald. Pat Dowell (3rd).

These are the real heroes of your dead city, silently battling against the communist vandalism and finally earning the praise they so richly deserve. You're doing a great job, Brownie!

But locals are still distressed by the stickers, a hateful display they say is without precedent in their diverse neighborhood.

Sure, there's open tribal warfare between different morlock clans, but this is actual "hate" and has no precedent in a "diverse" area otherwise noted for its peace, prosperity and high levels of trust. 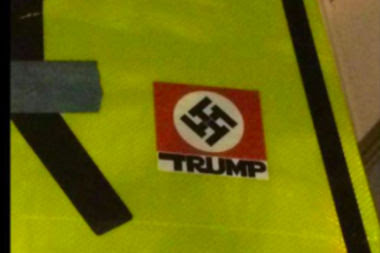 "It's shocking and appalling," said Debbie Borman, who's lived in the South Loop for 10 years and shared a photo of one swastika sticker near 14th Street and Wabash Avenue to Facebook. "Whether there’s any affiliation to the president-elect is sort of irrelevant; to have that kind of speech come up in an urban area that’s highly diverse, it's just unprecedented."
Because it's likely that these are being put up by Trump's official campaign and not by unhinged leftists. What color is the sky in your world, lady?


Dowell's office said they've only been fielding reports of the stickers since last month's election, leading the alderman to believe that the displays are related to Trump. The sticker Borman shared shows Trump's name under the swastika.

You know what, I think you might be right! This is why you get that big sinecure pay, because you can make these amazing deductions. Yes, a sticker that says "Trump" on it might, just might, be somehow tangentially related to the 45th President.


"Hate crimes like this have increased since Trump's election," Lampe said. "We've not seen this level of hate and it is directly related to Donald Trump."

It's Trump's fault his enemies are criminals, scumbags and vandals.

The South Loop swastika stickers follow recent reports of a swastika spray-painted on an Austin elementary school and another scrawled on a church in Pilsen. 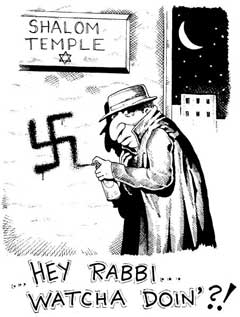