January 19, 2017
Until recently our enemy was hoping to keep Whites pacified with meaningless and spiritually harmful distractions while preaching the virtue of "tolerance" in the face of demographic disaster and ultimate genocide. Now the mask has slipped off revealing the hate-filled jew who has been as explicit as possible in stating that it wants Whites destroyed. The "diversity" makes us strong drivel seems like a quaint throwback to a more innocent time when satanic criminals weren't openly calling for another Holodomor. They want us dead. They're not even being deceptive about that goal any more.

Apparently not everyone has been informed that it's now perfectly acceptable to demand the complete annihilation of our people and there are still attempts to preach the nihilistic gospel of accepting everything and questioning nothing because it's the Right Thing to Do and all the rest. Today we'll get a lecture from the moose-limb on why their invasion of our ancestral homelands is not, in fact, an existential threat but really a chance to enjoy foul-smelling food, strident prayer calls and an exciting culture of barbarism and idiocy. We'll go back to smiling and trying to win lame rhetorical points until that scimitar is pressing into your neck. Then all this verbal flatulence will dissipate and civilization will die, but until then be nice to moe-ham-head, okay?

As opposed to Whites, who have been the official jewish holocaust goat for over fifty years, endlessly being blamed for the predictable failure and pathology of the inferior races and told it's in our best interests to die, a sweet savour on the altar of "diversity," a penance for non-existent crimes, the death of the West.

The forum in New York City was co-organized by the Organization of Islamic Cooperation (OIC) and the Permanent Missions of the United States, Canada and the European Union Delegation.

I wonder which terrorist groups and nation-wrecking merchants this "charity" is associated with. "Permanent Mission" is right, the constant kosher goal of transforming the world into a shit-colored hell.

"In times of insecurity, communities that look different become convenient scapegoats. We must resist cynical efforts to divide communities and portray neighbors as 'the other.'"

The enemy army attacking your crumbling defenses is actually your friend! Don't you feel better about being slaughtered now?

"Discrimination diminishes us all," he said. "It prevents people – and societies – from achieving their full potential. Let us draw strength from the values of inclusion, tolerance and mutual understanding that are at the heart of all major faiths and the United Nations Charter.

The mighty strength of turning our lands into a stinking, dangerous bazaar for the traveling merchant. There is no evidence that forcing different races together creates anything other than conflict and misery, but we'll keep lying as long as you're dumb enough to listen. Besides all "major faiths" are the same, like judaism that teaches you're cattle destined to become slaves or the Religion of Peace and its powerful stand against driving trucks through pedestrian areas to please a snake idol located in a stone cube, for example. 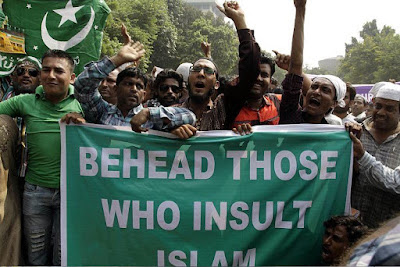 As the holy Quran states: 'nations and tribes were created to know one another.'"

Or, as another verse puts it: And when We wish to destroy a town, We send Our commandment to the people of it who lead easy lives, but they transgress therein; thus the word proves true against it, so We destroy it with utter destruction. Open wide, Europe!

In the U.S., the number of hate crimes targeting Muslims rose 67 percent in 2015, according to FBI data, up to their highest level since the aftermath of the 9/11 attacks.

All of them later proved to be cynical hoaxes but the important thing is it could have happened and please hurry up and die kuffir.

Meanwhile, in Europe, the number of people holding anti-Muslim views has also been on the increase.

Yeah. I wonder why.

Addressing the forum, the OIC’s Ambassador to the UN, Moiz Bokhari, stated that political rhetoric was one of several causes for the spike in anti-Muslim sentiment.

That and actually, you know, encountering the sand person garbage that has been brought in to act as a biological weapon against us.


Bokhari added that that “all types of radical extremist discourse” must be countered through education as well as the media.

Until we have the numbers, of course. Then we'll just kill you.