The Mulatto that Failed

January 03, 2017
In a few more days the seemingly endless nightmare of being ruled over by a narcissistic half-caste will finally come to an end. The Kenyan sodomite will be removed and quickly forgotten as the long road back from cultural marxist insanity begins. Fifty years from now the Indonesian foreign exchange student will be the answer to a trivia question, an answer no one will believe. Yes, there was a time when Whites were so debased that we installed a purple-lipped empty suit, a non-entity whose principal qualifications were a lifetime of down-low encounters, drug abuse and professional victimhood. Barry Soetoro was the ultimate victory for the jew, the living, stuttering proof that they could now get away with anything, that the hated White population was finally defeated and resigned to our coming kosher genocide.

Then Current Year, now known as last year, arrived. The entire semitic con game collapsed. Whites awoke from the opium dream of empty hedonism to discover we were being displaced in the country we built from nothing. We were going to become a hated minority. This disastrous future was soundly rejected at the polls. It's time to restore our homelands. The first step is removing the first "African-American" President and fixing all the damage it caused under jewish direction. There's going to be a certain amount of wailing.

U.S. President Barack Obama will deliver a farewell address on Jan. 10 to reflect on his time in office and say thank you to his supporters, he said in an email statement released on Monday.

"I sure had fun pretending to be a Big Man and taking all those vacations! Thanks debased Whites, chicanos, marxist professors, gibs me dat voters and all the rest. I'm going to miss sleeping until noon, watching negro ball, golfing and occasionally embarrassing myself and the dead country I represent in front of world leaders."

Obama, noting that the first president of the United States, George Washington, had penned a farewell address in 1796, said he would deliver his speech in his hometown of Chicago.

Remember when all the biographies of past Presidents received Orwellian alterations to include references to the jack-legged Chicongo pimp? I guess we're still doing that. Just like Washington, what a hero.

Republican Donald Trump will be sworn in to office on Jan. 20. During his campaign for the White House, Trump pledged to undo many of Obama's signature policy measures, including his healthcare law.

Your entire bullshit "legacy" is going to be erased. Ten years from now no one will even remember your name.

Obama, who campaigned hard for Trump's Democratic opponent Hillary Clinton, has sought to ensure a smooth transition of power despite major policy differences with his successor. He also leaves his party without a clear figurehead as he leaves the White House.


"Since 2009, we've faced our fair share of challenges, and come through them stronger," Obama said in the email, likely foreshadowing a theme for his speech.

"That's because we have never let go of a belief that has guided us ever since our founding - our conviction that, together, we can change this country for the better."

Then, on November 8th, we finally did. 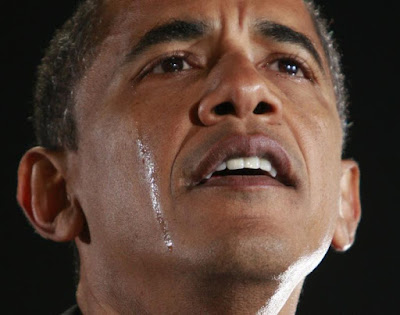