February 10, 2017
They're building a bulletproof wall around the Eiffel Tower. It will protect against "attacks." We need more rapefugees, more enemygrants, our magic soil will convert them into peaceful consumers. If that fails, we can put up walls, cower in our homes, avoid large areas of the city, run and hide, all the while avoiding any spoken word or thought that might be perceived as hostile to our own imminent destruction. "Is this Africa?" asks an Asian tourist and the answer is "Yes" for all practical purposes. A nation is not a color on a map, it's not a proposition club that anyone can join, it's not a charity dedicated to the unsuccessful treatment of negro and sand monster pathology. It's shared culture, tradition, religion and race. When this is gone your homeland is gone and no amount of passive deterrents against Religion of Peace mayhem can change that.

Elsewhere, the pope that belongs on the end of a rope was grappling with the real issue of our time: anti-semitism. This is what matters, not the burning cars, not the sex attacks, not the death of the West. We must prevent Whites from coming to accurate conclusions about the traveling merchant and pathetic JUDEO-christianity is on the case. This is the spiritual rot, the nihilistic do-gooding that led to the present mess. If we don't fix this, all the travel bans and walls are ultimately meaningless. We must embrace healthy traditions, not the satanic church birthed painfully during the disastrous jewish century.

In an address to the Anti-Defamation League Thursday, Pope Francis denounced the “widespread” anti-Semitism in the world today, while recommitting the Catholic Church to “repel anti-Semitic tendencies.”

Speaking in the Hall of Popes in the Vatican, Francis recalled his visit last year to the Auschwitz-Birkenau extermination camp. “There are no adequate words or thoughts in the face of such horrors of cruelty and sin,” the Pope said. “There is prayer, that God may have mercy and that such tragedies may never happen again.”

Muh holohoax. Look at all the horrors dreamed up by soviet war propagandists. Meanwhile, Europe is silently dying, under constant attack from within and without, but I guess that pales in comparison to the time g*d's favorite people had to do physical labor.

Calling to mind his predecessor Pope John Paul II, Francis said that “memory” must be enabled to play its necessary part in shaping a future “in which the unspeakable iniquity of the Shoah will never again be possible,” a future of “genuine respect for the life and dignity of every people and every human being.”

Do you know how long it takes to cremate an adult body? How much fuel would be required? Have you ever seen a real gas chamber and noticed how it resembles a bank vault? Are you aware the buildings you saw were constructed by the soviets after the war? It wasn't possible then, either. Still, we must respect "human" life. Come on in, rapists and murderers! 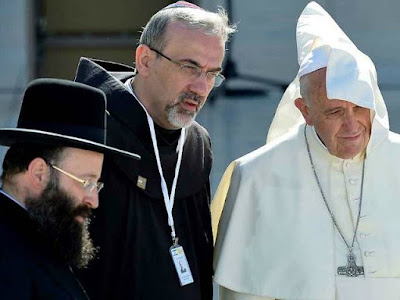 The jew and their useful idiot.

The Pope also stressed that “protection of the weakest” is essential for the fight against anti-Semitism. “Caring for the sacred gift of all human life and safeguarding its dignity, from conception to death, is the best way of preventing every type of violence,” he said.

All Lives Matter. The negro animal, the moose-limb invader, the reeking la-teen-oh filth, it's all super precious. That stone age leftover is your equal.


He also praised the mutual friendship and fraternity that now exists between Jews and Catholics. “With the Psalmist we too can say: ‘Behold, how good and pleasant it is when brothers dwell in unity!’” he said.

With a friend like that you have no need for an enemy.


“We are strangers no more, but friends, and brothers and sisters. Even with our different perspectives, we confess one God, Creator of the Universe and Lord of history,” Francis said on an earlier occasion.

Sure, they call us "cattle" and "unclean meat," believe they're superior to everyone else and plan to enslave us, but it's the same basic thing as the mealy-mouthed "g*d loves everyone and all your sins" I promote.


What draws Christians and Jews together, the Pope declared, is that both faith traditions “find their foundation in the One God, the God of the Covenant, who reveals himself through his Word.”

Yeah. That and compound interest on loans. 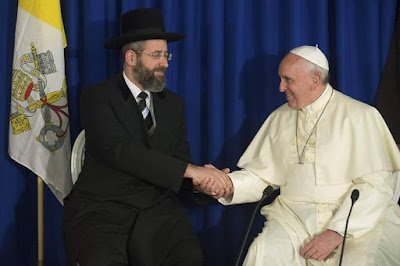