February 28, 2017
The negro will begin approximating the minimal standards of civilized behavior tomorrow. While we're waiting for the future that never seems to arrive, we can marvel at the deceit of our time: an obviously failed branch of humanity was promoted by the jew as our equal and we somehow fell for this rabbinical stunt. We should be thankful for streaming video, which has finally allowed us to observe the content of their character safely, finally completely destroying the semitic illusions that were maintained on the talmudvision and in our schools at great cost to the tax-paying sucker. We live next to dangerous animals unleashed by the same merchant that brought them here in chains in service of the almighty shekel.

Mumbling about drugs, violence and what you'd be willing to do for a "low nigga" gone wrong.

Kyree Corley, 22, was killed in the shooting and four other people were injured when shots were fired from an automatic weapon as rap musicians Boosie Badazz and Baby Soulja recorded a video at Moncrief Road and Myrtle Avenue.

The mind and anti-soul of the Crabgrass-American. The production of a kosher bowel movement turns into a bloodbath when a tar creature straight from a nightmare starts "busting" with an "automatic weapon." How can we blame this one on the Second Amendment and use it to punish law-abiding Whites? Might be a tough sell.

Police did not know how many shots were fired, the type of weapon used or even if the gun had been fired by someone who was at the event or driving by. According to the incident report, police are only searching for one suspect.

We don't know anything, no arrests were made, everything is fine, keep slouching toward the grave of "diversity" we dug for you.

Many of the 30 people gathered at the music video set were filming on their phones, police said. Homicide investigators have asked bystanders to provide those videos to police to help them find out who opened fire.

It should be extremely helpful, what with the brown blurs that were captured. Now we just have to figure out which one the identical looking and behaving genetic aliens should be sent to the "crib" by our "races" justice system. 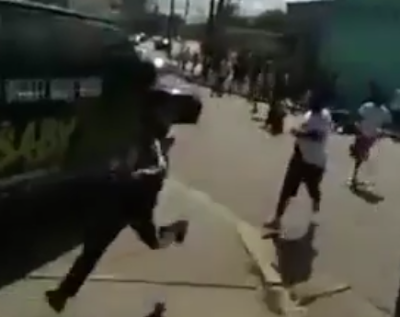 High-quality footage of the rot.

“Word spreads throughout the neighborhood, and that’s why people came out peacefully to watch this video (production),” News4Jax crime and safety analyst Gil Smith said.


One minute into the cellphone video, the man gets into a vehicle -- which he calls a truck, but which might be an SUV -- and chats with a friend about Boosie being from Duval.

The rich tapestry that makes up the life of the American negro.


Around the 3-minute mark, one man offers the other a lighter and they talk about “Duval coming up!”

I hope it's soon, I have a job to get to! Kidding, kidding.


At 4:10, a black pickup truck drives by and seconds later shots ring out from an automatic weapon. Some 20 shots or more are heard.

Tribal warfare in a dead nation. Maybe these aren't overcooked Whites suffering from "poverty" after all.


People can be seen running away from something in the distance, streaming toward and past the truck.

Look at that boy run! How about a "scholarship" to attend a SEC (Systematically Excluding Caucasians) school?

Shee dawg, dey be axin' in a toe-tall-lee dictable wae. Is anyone really surprised by typical negro behavior anymore? The only thing surprising is that the jewish excuses keep coming in the face of evidence like this of the staggering inferiority of a failed race.

Nigga bodies (Ah! Ah!)! Who could have predicted this?

We let them vote. They have more rights than you. We give them hand-outs. It's laying (sic) on the ground, dawg.

Smith said many people in the area are afraid to speak up because of fear of retaliation. 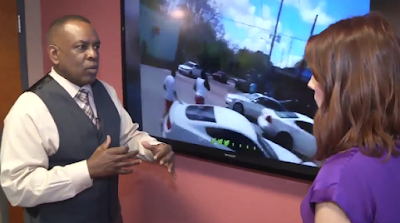 Here be why we need to go back to Africa, bee-atch.
Aspiring Rapper Baby Soulja Boosie Badazz Content of Their Character Duval Jacksonville Kyree Corley No Arrests Were Made Pathology of the American Negro