February 22, 2017
When President Trump started talking about the moe-ham-head disaster in Sweden I wanted to stand up and cheer. This is a conversation we need to have. In the minds of many Whites Swedenistan is still a paradise of liberal values, generous welfare programs and award-winning bikini teams. Back in reality, it is rapidly being annexed by the third world, while jewish speech and thought crime laws prevent even the mildest opposition to the planned demolition of another White homeland. A flood of sand creatures is drowning a nation, rape and sex attacks are epidemic and the cities are burning. The leadership is more concerned with pretending everything is fine to preserve their pathetic sinecures than actually addressing the encroaching rot. We need to look long and hard at this dying nation. This is the future for us if we lose. We have to win, the alternative is the grave.

"Everything is fine! Please ignore the fact that flames are currently devouring our largest city and enemygrant sewage is waging open war against a police force that has been instructed not to stop them." This, hot on the heels of "Lying Drumpf and his made-up stories." I'm beginning to understand what is truly meant by Gott mit uns.

Sweden’s capital was plunged into chaos on Monday as police were forced to fire at rioters after a violence erupted in the suburb of Rinkeby, which has been labeled a ‘no-go zone’.

The mighty strength of "diversity," the precious value of the rapefugee. Women and children, disguised as fighting age men, continue to overrun a feckless and dying land. The Viking ancestors watch in disbelief as their children are defeated without a fight, seeking shelter in delusional optimism and vile sanctimony. A nation that can't defend its own borders has no future. A people too afraid of the jew to state the obvious deserves the destruction that is coming. Will you resist Sweden? Or will you shame your forefathers with pitiful surrender and a death without honor? Were you born simply to be a victim? Is your soil and blood so worthless you'll hand it over with an apology on your lips and then politely raise your head to expose your neck for the jihadan scimitar?

In a desperate attempt to protect themselves from a 30 strong mob, which was throwing rocks, the officers were forced to fire a shot into the rampaging crowd.

Wow, an entire shot. Here once embattled cuckolds stood and fired the shot no one heard. Time has swept your country down into the dark abyss. At least you're not "racist." Maybe the jew will put a nice marker over your shallow grave. Or just leave the reeking bodies for the vultures, that's fine too, we deserve death, the talmudvision and our criminal government said so.

In a speech, clearing intended to ridicule Donald Trump’s speech over the weekend where he told a Florida rally that Sweden was facing a crisis. Mr Löfven insisted the liberal nation was “doing well” and was a country of opportunity.

Things have never been better, goyim! Now if you'll excuse me, I need to go huddle behind concrete walls and hired security in a vain attempt to shield myself from the disaster that has been unleashed in the name of appeasing a jewish enemy that wants us violently dead. 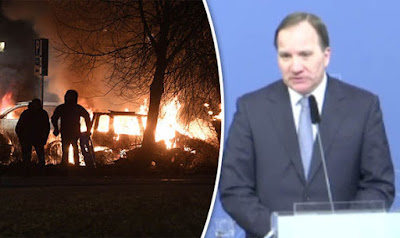 “Let me put it like this I was, like many others I believe, surprised by the comments made about Sweden this weekend,” he said.
This whole "noticing reality" thing, it has got to stop.


“Sweden like many other countries, we have opportunities, we have challenges, I believe that goes for every country in the world.

We're a lot like Syria or Somalia, a few minor challenges, you know the deal. Come on, use your imagination!


Continuing his dismissal that Sweden is facing turmoil as more than 50 areas have been labeled as ‘no-go zones’ where police officers are regularly attacked and citizens are afraid to speak to officials, the PM said the Scandinavian country was handling the issues head on.

More like handling the issues head in the sand.


Mr Löfven said: “Do not forget that in international rankings in issues such as equality, human development, competitiveness, like our guest today from Canada, [we] are doing very well.

In terms of meaningless talmudic bullshit we're doing really well. We've been declared the best country in the world for submission to brown hordes and rapid disposal of unpleasant truths. When it comes to rankings in categories like number of burning cars or gangs of rape apes, our scores are maybe a little less impressive. But hey, we're still better than South Sudan. Every nation has challenges, right? Please let me keep farting through silk as my homeland is cremated by jew-authored foreign invasion.

“So yes we have opportunities, we have challenges we're working (on) them every day.

Many such cases. Sad!

"Sweden, who would believe this? Sweden. They took in large numbers. They're having problems like they never thought possible.

Thank you President Trump. This is the hero we don't deserve.

Despite police officers taking to social media to express their frustration with the increasingly lawless tendencies across the nation, former Swedish PM Carl Bildt roared on Twitter: "Sweden? Terror attack? What has he been smoking? Questions abound.”
Burning cars, no-go zones and rape gangs? You high or something, man? All those pictures and videos must be drug hallucinations. R.I.P. Sweden. 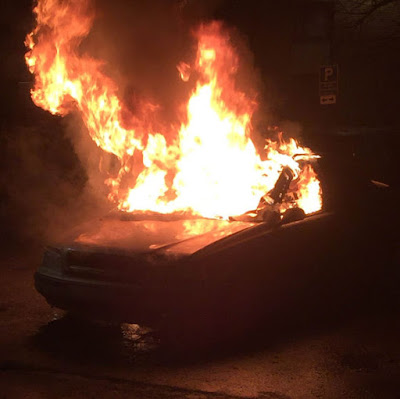