Run to the Rhine

April 04, 2017
The United States is teetering on open civil war. Our jewish enemies have decided that they can ignore the law or wildly misinterpret it to suit their genocidal agenda. It has now been confirmed that the Evil Party was spying on Donald Trump during the Election Season, a highly illegal and shocking abuse of power that has received minimal attention from a media that is now simply the cheering section for the kosher collapse. Our President now faces a difficult choice: becoming another Loser Party cuck for the sake of maintaining a decaying order and keeping the pathetic farce of the U.S.A. alive for a few more years or continuing to resist the semitic enemy and likely forcing violent conflict. Either way, difficult days lie ahead.

We can take solace in knowing that this current crisis is proof that there still is fight left in Legacy America and we're growing stronger with each passing day. Contrast this with Germanistan, a nation quietly slouching toward the gallows, a land of cowardice and delusion where Germans are becoming free-range victims for the rapefugee invasion. They're still afraid of being called names. Bring in more "multi culti," we need the enemygrant for so many reasons, I love Allah, feel free to rape my woman while I watch.

Police in western Germany are searching for a man who is suspected of raping a young woman on a nature reserve after threatening her and her boyfriend with a machete.

The wonders of "diversity," the gift of dangerous tar-black imbeciles that just keeps on giving.

The young couple were on a camping trip in the Siegaue Nature Reserve, north of the former German capital of Bonn when they were approached by a man at about 12.30am on Sunday.

Oh look, it's a monster from the African all against all wandering around the forests of Europe for some reason. Does this prove we're not "racist?"

The man had approached their tent holding a large knife - believed to be a machete - and threatened the couple before demanding the 23-year-old woman leave the tent with him, according to police.

You need to be armed.

He then raped the woman in front of the tent before running off in the direction of the Rhine River, police said.

Apparently the "man" in question allowed this to happen without offering the slightest resistance. You're camping, certainly there's some tool you could use as a weapon? You're not just going to stare at the wall of the tent while this happens, are you? Then I remembered it was Germany, a country that keeps voting for Merkel, and stopped wondering how this could have happened. This is a nation that has lost its will to live in hopes of getting a pat on the head right before the moon cult scimitar opens up the throat. This is an entire country willing to sacrifice its women to invading hordes as war spoils. This is the end of Germany. Cause of death: suicidal cowardice. 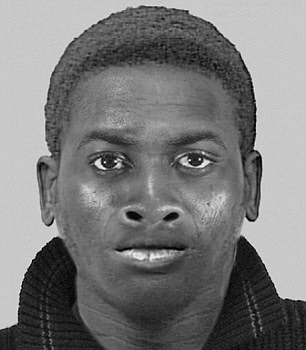 What in the blue hell was this thing doing in a White homeland?

The woman’s 26-year-old boyfriend, who had also been threatened by the man, contacted police and medical responders took her to the hospital.

Yeah. Great job. May history forget that "men" like you existed. For evil to triumph just do nothing. Let's not do anything crazy like trying to fight the rapist animal or voting for a candidate the jew-controlled liar press called "extreme right wing."

Police are now searching for the man accused of raping the woman, who is described as a dark-skinned male between 20 and 30 years old. He is believed to be 5ft 9in.

As of Monday afternoon, the man had not been located by investigators, despite helicopters and sniffer dogs trying to track him. 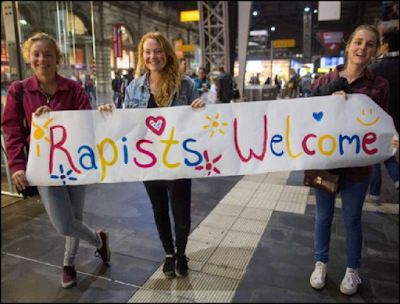