August 17, 2017
The last time I talked about Spain, they had just received a shipment identical looking and behaving diversity that appeared to be extremely eager to embrace local customs and traditions and start "pumping" money into the economy, the most important thing any completely interchangeable two-legged bar code can do in this best of all worlds. Flash forward to today, where we now get the "after" half to go with the sickening "before." Another enemygrant decided that all highways are legal, some just lack documentation, and ran down its benefactors for the greater glory of a snake idol in a stone cube thousands of miles  away. Did I mention we need to fight "White supremacy" and destroy every symbol of the past? We have always been a home for desert rapefugees.

A van has plowed into pedestrians in Barcelona in an apparent terror attack leaving two dead and several injured.

I'm sure the Loser Party will be lining up to formally disavow the moon cult and demand immediate removal of the brown aliens. Well, that or the memory hole. Don't worry, you don't have to put the Spanish flag (A fascist flag, no less! They must have somehow provoked this attack and are the only guilty party.) over your Faceberg duck-face photos, we're not doing that anymore.

Metro lines have been shut and shoppers and pedestrians have been seen running into buildings as armed police flooded the area.

Our healthy modern democracy. Free-range victims scattering like quail from the latest jihad, militarized police running around trying to look scary and organized, a single moe-ham-head puts an entire city on tilt.

Police have confirmed that the "massive crash" involved a white van mounting the pavement.

The self-driving van "mounts" the pavement. Autonomous homicidal vehicles, bizarrely sexual language, the death of Europe has a dignity all its own. 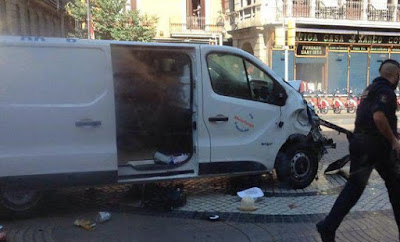 The transformation that must take place.

They are treating the crash as a terror attack.


Local outlet El Pais claims that police sources have said that the driver ran away from the van on foot after the smash.

No arrests were made. At least this proves we're not "racist." Until the next jewish accusation, at least.

Other unverified reports from local TV channel TV3 say two armed men are holding hostages in a nearby Turkish restaurant.

Turkish? Huh, how about that? Probably crazed Whites all hopped up on privilege and supremacist ideas.

Reports say the van plowed into people outside a Kosher food shop, although this is yet to be confirmed.

Oy vey, we take back everything we said about how this incident should be immediately forgotten. The dark biological weapon unleashed by the merchant is not selective in its attacks. This is the worst and most vile anti-semitism, we demand a gentile military presence in front of every synagogue, kosher food shop and swimming pool to protect g*d's favorite people from the "immigration" disaster we inflicted on you.

"I think several people were hit. It was horrible, there was panic. Terrible."

"Diversity" is our greatest strength.

Eyewitness Amar Anwar, human rights lawyer, told Sky News: "I did not see the van mount the pavement. I heard the crash.

The "human" rights sand monster didn't see nuffin. It might have been one of his clients behind the wheel.

The British Foreign Office guidance for Spain reads: "Terrorists are likely to try to carry out attacks in Spain."Attacks could be indiscriminate, including in places visited by foreigners.

That awkward moment when the United Kaliphate is more in touch with reality than you.

Spanish police have disrupted a number of groups suspected of recruiting individuals to travel to Syria and Iraq from 2015 to the present date.

It's probably nothing, go back to sleep. Say, is that Africa Ball on your talmudvision? Look at that boy run! Everything is fine.

Some of them expressed an intention to carry out attacks in Europe.

I know, pretty surprising. Who could have predicted this? 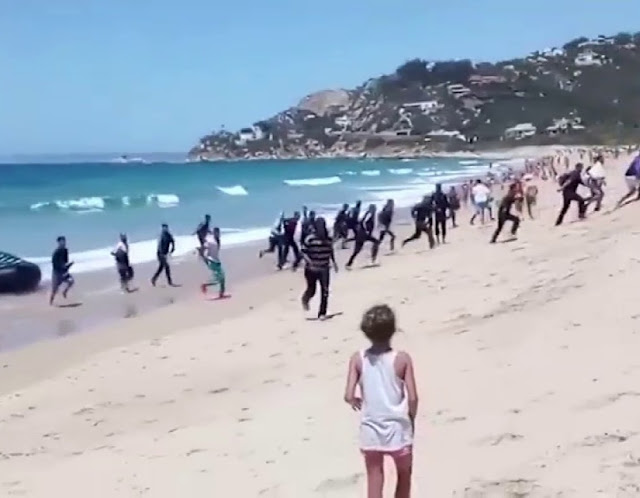