A Letter of Unknown Origin

September 08, 2017
We don't care that we're being targeted for genocide. We don't care that we're under constant attack from jew-controlled institutions: the fraud news media, the schools, the online monopolies. Yes, that disastrous jewish century of endless war against our people is a big yawner. Who cares, I'll be dead by the time everything my ancestors built is completely destroyed and this pathetic nihilism is a lot easier than worrying about the future. What we do care about is the fact that Blue defeated Red. We care about it enough to send a letter (Yes, a letter. In the mail. In 2017.) to Red's affirmative action plantation master. This quaint throwback was full of shocking language absolutely dripping with "hate." Well, that's the official story, at least. 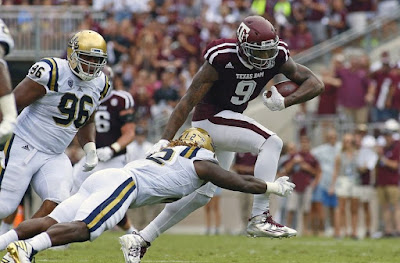 I love cheering for negroes but I'm also "racist."

In the end, football is just a game. Sure, it can get emotional, but those emotions should never cause fans to cross a line that one Texas A&M fan evidently crossed this week.

Muh emotions. Tonight the Liberia Ball let me down.

Charlene Sumlin, the wife of Aggies coach Kevin Sumlin, posted a picture Thursday evening of a racist, angry, threatening letter sent from a fan to the family's house following the 45-44 loss to UCLA at the Rose Bowl Sunday evening.

Everything about this incident is so unbelievably plausible. Here's a "racist" letter (In 2017!) from someone who worships the dark genetic aliens on their talmudvision. Better post it on the internet to prove how bad Whites are and to garner cheap sympathy after your jungle monsters lost to some other jungle monsters. We need to destroy a lot more statues honoring extremely young Whites who died in senseless brother wars to enrich the wandering merchant.

How not to "suck" as a "coach," an easy guide. Use drugs, alcohol, snow hoe prostitutes and the promise of plenty of free-range Eloi victims to attract amazing "five star" morlocks to your communist indoctrination center. Create non-existent "Afro-American Studies" classes to cover up the obvious academic shortcomings of the incredible running and jumping tar creatures. Then, if you still manage to lose, a low energy phony hate crime can deflect any criticism of the massive and pathetic corruption done in the name of a stupid child's game. 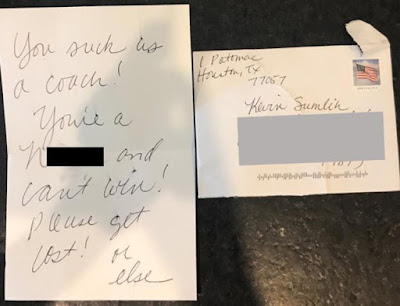 We know it's from a real "racist" because it's in cursive.

Texas A&M responded via statement from president Michael Young and athletics director Scott Woodward.
We need formal statements, 945 point plans and a lot more hostility directed at the White debt victims on campus. Also, there doesn't appear to be a postmark on the envelope. Hey "coach," watcha doin?!?


"Earlier this evening, we became aware of a letter of unknown origin that was sent to the Sumlin family home," the statement read. "We unequivocally condemn this disgusting and threatening letter. There is no excuse for hatred and, as a community, we will not allow the ignorance of some to intimidate any member of our community. On behalf of all Aggies, our thoughts are with Coach Sumlin and his family, and we will do all that we can to ensure their safety."

LOL. Our thoughts and prayers are with our negro mercenary captain during this trying time. We will protect you against highly dubious not-see correspondence. We DISAVOW and condemn this unbelievable outrage. Whites are bad and need to be eliminated and this proves it.


There is absolutely no excuse for hate and ignorance. No football game, season, program or devastating collapse on national television should be a reason to send any angry letter to a coach's home, much less one as disgusting as this.

Evil White supremacist or negro ball fan. Pick one and only one.


Sumlin is 44-22 in his six seasons as Texas A&M's coach. His .667 winning percentage places him fifth among the winningest Texas A&M head coaches of all time with a minimum of 20 games. 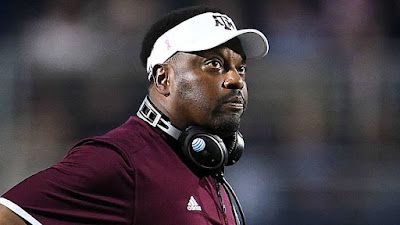