September 19, 2017
Watch the Liberia Ball, goyim! Marvel at the amazing running morlocks, many of whom can move at full speed for several seconds before aimlessly milling about while the friendly merchant sells you products and lectures you on Right Think. Drink your beer with the little "U" on the bottle, take your pills, zone out in front of the talmudvision for hours, soil yourself. Believe it or not, this behavior is steadily losing popularity as the dusky Hero Athletes hold impromptu "kill Whitey" events before, during and after the games. Formerly numb and debased White cucks are giving up on their "fantasy football" team and waking up to reality. Maybe Red against Blue isn't the struggle we should focus our energy on. Maybe the negro really is a moronic and dangerous alien that needs to be removed. Maybe the jew behind this ugly spectacle wasn't entirely honest.

The NFL would prefer the players’ now-ubiquitous protests take a back seat to the action this season, but it looks like the league won’t get its wish.

At some point the jew owners are going to be forced to chastise their pet schwoogies and then we'll get endless howling about how "the em eff ell be races an sheeet." I can't wait. Soon the semitic bread and circuses will devour itself.

If anything, the players seem ready to take their social critique beyond sitting during the national anthem.

Great news! I look forward to tar monsters straight from your worst nightmares yelling directly into the camera about their desire to kill Whites and rape our women. Might be time to go to a kosher commercial. A steadily decreasing White audience is wondering why they're watching violent and idiotic orcs in uniform. The stands will look like something out of an Anglican church if this continues.

Seahawks defensive end Michael Bennett, who is among the ranks of NFL players to sit during the anthem, celebrated a sack Sunday afternoon with a single raised fist.

This will surely defeat the "races" five-oh and the White devils paying this creature's ridiculous salary. It's not like we'll figure out we can just stop supporting this jewish mess, right? Look at the jungle animal showing agitated simian behaviors after making another negro hurry. This worthless monster is on "my" team. 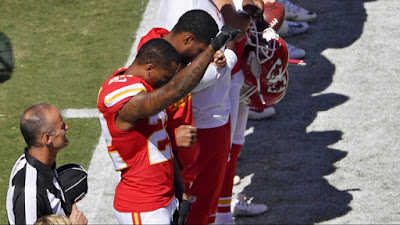 Bennett was the first Seattle player announced during pregame introductions before the home opener against the 49ers and received one of the loudest ovations.

Not every degraded White person is salvageable, obviously.

Then he took what’s become his usual seat on the bench during the national anthem.

Can't wait until it takes its usual seat on the boat back to Africa.

Seattle center Justin Britt and running back Thomas Rawls stood next to Bennett, each with a hand on his shoulder, during the anthem. Teammates Cliff Avril and Frank Clark also sat with Bennett for the final moments of the anthem.

...the land of the feeeeeee, and the home, of the, slaaaaavvvveeee!!!

Out-of-work quarterback Colin Kaepernick generally is credited with starting the trend of kneeling or sitting during the national anthem in protest of police treatment of black citizens in the US.

Freaky mulatto is credited with beginning the downward spiral of typical negro "I be the victim!" magical thinking that will eventually destroy the Congo Rugby.

Bennett’s raised fist, however, is the first instance of a player seeming to protest during a game.

While the NFL battles declining ratings and a negative perception surrounding the anthem protests, the league office can’t be excited to see players moving their demonstrations to the field of play.

Muh shekels. Better discipline the schvartzes, I'm sure that won't end is total disaster. What was once a weapon used to pacify the gentiles will now be used to teach racial reality. Our enemy is losing on every front. We're going to win. 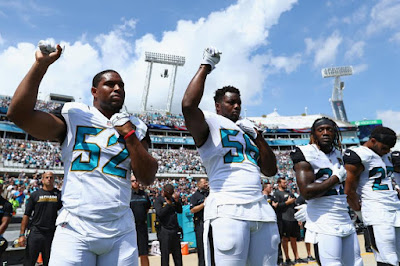