September 29, 2017
Visit Swedenistan, a country noted for its rich Islamic culture, many beautiful mosques and an exciting night life that features brutal rapes by the amazing identical brown "diversity" that has flooded in because a jew said we had to do it. Just beware of the extreme right wing not-see presence, the one snake in this modern Garden of Eden. Burning cars, gang rapes, riots, explosions, that's just an ordinary part of life in a big city. What isn't ordinary or acceptable is "hate." Sick ideas and vile spewing bigotry like "We should be allowed to have our own country" or "All these rapefugees are destroying our homeland." This horrible scourge that won't go away must be defeated and until that glorious day when the last Swede is lowered into the cold uncaring soil we'll just have to be alert and vigilant to the real problem: Crime Think.

The US Embassy in Sweden has issued a warning to its citizens ahead of a planned neo-Nazi march in Gothenburg on Saturday, warning that the event could turn violent.

Be careful Amurrkwans, it could get violent at the nawrtzee march. I mean, you watch the talmudvision, right? You've seen just how bad evil Whites who don't want to become a hated minority in their own lands can get. Unlike the deeply spiritual and peaceful moose-limb faith, these are pale rotting husks who have been totally consumed by "hate" and now represent a threat to the moe-ham-head-dan utopia we are building with lots of help from the traveling merchant.

Even in Sweden there are at least some Whites who aren't content to sleepwalk toward the gallows of semitic "multi-culti." We must resist this voice of sanity at all costs. Bring on the "counter demonstrations!" If there's any violence it's clearly the fault of the hitlerists, this is axiomatic.

The US Embassy advised American citizens to avoid the area where the march was scheduled to take place, saying: "Even demonstrations intended to be peaceful can turn confrontational and escalate into violence."

You might also want to avoid the dozens of enemygrant no-go zones.

Extra police have been sent to the city ahead of the march, including uniformed officers and others in civilian clothing.

Young Swedish women are on their own when it comes to dealing with alien rapists, but we have plenty of police available to attack free speech in a dying land.

The city centre is expected to be particularly busy on Saturday due to several other events taking place, including the annual Book Fair and a football match, and its timing as the first Saturday after pay day.

Muh football. Please, go to the "look at that boy run" grass hockey and not the evil rally of pure evil and did I mention the precious six million up a chimney? 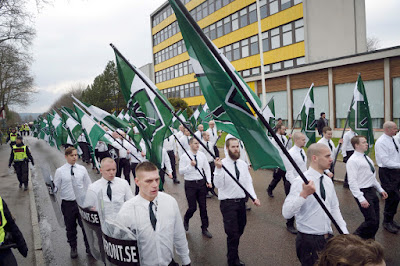 The march also coincides with the Jewish holiday Yom Kippur – a day of atonement observed by fasting and praying – and the route was initially planned to pass close to a Gothenburg synagogue.

We're in our synagogue of Satan trying to literally trick g*d. Don't force us to wail about how Grandma was turned into living room furniture and because of this you should allow us to destroy your country with endless foreign invasion.

The NMR, set up in 1997, promotes an openly racist and anti-Semitic doctrine, and its growing popularity in Sweden has caused concern in neighbouring Norway.

Wow, openly "racist!" That's the worst kind. Crazy ideas like wanting to be around people who share your language, religion, culture and bloodline are being promoted. Who do these "haters" think they are, Israelis?


Earlier in the month, about 50 members of extremist group marched through the centre of Gothenburg, an event for which the group did not have a permit. According to media reports, a minor fight broke out between some of the protesters and a counter-demonstrator, but police quickly intervened and did not make any arrests.

Fortunately no Big Beautiful Women of high moral virtue had heart attacks, so I guess we have to let them march. 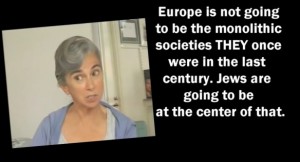