Sweden Lets it All Burn

September 11, 2017
Today is the anniversary of the horrible attack on muh freedom, the event the traveling merchant hoped would define this century in the same way Europe's Second Suicide Attempt defined the disastrous jewish century. We were offered two false choices: try to understand the moose-limb animal and appease it in hopes the sand monsters might be a little more reluctant to kill us or stage kosher invasions of nations not even tangentially involved in the undocumented New York landing strips in an effort to spread muh democracy or something like that. In the end both options were chosen and we enjoyed senseless wars for Israel abroad and moon cult invasion at home. We didn't put any boots up anyone's ass, instead we were the ones that got bent over by the jew who had orchestrated the entire mess.

Then last year this became the date when the dyke bitch from hell collapsed at some hypocritical memorial service, setting in motion events that would eventually lead to unprecedented victories and reversals. From now on this is how this date should be remembered. Rotten Clinton hits the pavement, the globalist plan falls apart. No more foreign wars, no more flood of mud from the Middle Eastern anus. Other White countries have not been so lucky.

Firefighters in the southern Swedish city of Malmö were forced to let a building burn to the ground after they were violently attacked by locals who threw glass bottles at them.

The religion of peace, this great religion, completely compatible with Western classical liberal traditions. All faiths are basically the same anyway, teaching such amazing universal truths like "be nice" and "no throwing bottles at people trying to help you" and "usury is wrong." These are the many masks of the same g*d, this is a deeply spiritual revelation. I'm such a good person, it almost hurts. Wait, it's actually deep cuts from broken glass causing the pain.

The fire, which occurred in the city’s suburb of Kroksback, initially started after two cars in a car park were set on fire Thursday at around 9 pm.

Cars torched by creatures straight from a nightmare, the exciting transformation that Europe must undergo if it's going to survive. They're so soulful and vibrant, not like stiff and boring Whitey who rarely if ever turns parked cars into flaming wrecks for the greater glory of a snake idol in a stone cube.

As the firemen tried to put out the second blaze, glass bottles were thrown at them and at their vehicles. The attack forced the firemen to abandon the blaze which engulfed the building and burned it to the ground.

And yet there's a few "racist" and "xenophobic" cranks out there who have suggested that opening our borders to endless jihadan invasion might not be the best idea we've ever had.

Police who arrived on the scene were also attacked with glass bottles though the police report does not specify what damage was done to their vehicles or any injuries sustained by the emergency personnel. 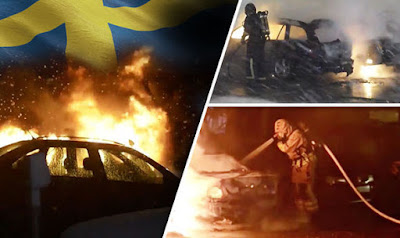 Authorities also added that they do not know if there is any connection between the two fires, though both are suspected to be arson.

You know what? I think your suspicions might be correct!

Attacks on emergency services personnel in Sweden are far from rare in certain areas that have become known globally as “no-go zones”. In some of the more notorious heavily migrant-populated suburbs like Husby, Tensta, and Rinkeby in Stockholm, police, firemen and ambulance workers have been attacked on multiple occasions.

It's a small price to pay for massive benefits like more brown faces and maybe exotic food or whatever.

The situation has become so bad in some areas that ambulance unions have asked for bullet proof vests to be given to paramedics working in problem areas. 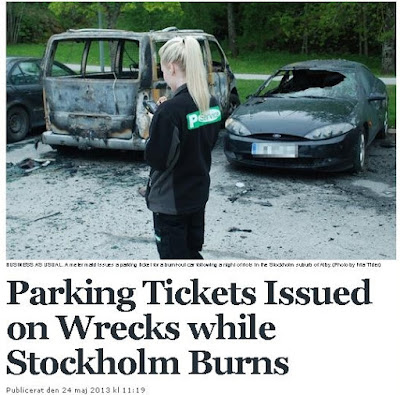