September 01, 2017
It's almost time for the student loan usury victims to return to the Communist Indoctrination Centers or "colleges" as they were once called. Here is your chance to be injected with jewish poison, rack up massive kosher debt and leave an unemployable human derelict. In the meanwhile, be sure to enjoy all the "fun" of campus life, such as the massive and cowardly panics caused by completely innocuous objects. Yes goyim, for only six figures you can experience the excitement of going witch hunting for the invisible but omnipresent "racists" hiding in your midst. This year outrage season starts early, with food litter "triggering" overly sensitive racial inferiors and necessitating marxist discussion groups.

This weekend, leaders from Ole Miss Greek life convened upon Camp Hopewell in Lafayette County for a three-day retreat designed to build leaders and bring campus closer together.

It's hard to imagine a more noble goal. Here in the beauty of nature we will come together as one race, the human race, and learn to set aside our petty differences and recognize that we are all working together for a better campus. I bet this goes off without a hitch.

The retreat was cut short Saturday night, however, after three black students found a banana peel in a tree in front of one of the camp’s cabins.

Yes, this is real. The remains of tropical fruit sets off the jew-taught anti-White alarm in three pathetic inferiors. Dis peel bee races lake a con-fed-rat stat-yew an sheeet. We need to have a long talk with the "milk" about this outrage. 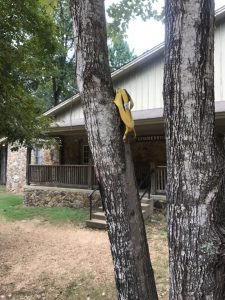 Irrefutable proof that evil root wizards have infiltrated our village.

The students shared what they found with National Pan-Hellenic Council leaders, sparking a day’s worth of camp-wide conversation surrounding symbolism, intended or not.

Negroes hijack the conference to hoot and eek at the White devil. "Intended or not." Yeah. Hey negro, watcha doin'?!?


In the midst of the open and sometimes heated discussion, senior accounting major Ryan Swanson said he put the banana peel in the tree when he could not find a trashcan nearby.

That's a real likely story. The truth is you're an evil criminal who must be punished. We're going to put this rat helmet on you. They'll eat your face.

Alexa Lee Arndt, interim director of Fraternity and Sorority Life, said she was one of the only university staff members acting in an administrative capacity at the weekend retreat. Monday afternoon, she sent a letter to all campus chapter presidents, council officers and chapter advisers, confirming the incident and outlining the university’s plans.

We must come up with a thousand point plan to address this incident that has deeply wounded the Crabgrass-American. Welcome to New Piss. Your tuition will be increasing to pay for the latest "racism" inquisition and you can't clear you debts with bankruptcy so don't even try it, gentiles.

“To be clear, many members of our community were hurt, frightened, and upset by what occurred at IMPACT … Because of the underlying reality many students of color endure on a daily basis, the conversation manifested into a larger conversation about race relations today at the University of Mississippi,” Arndt wrote in the letter acquired by The DM.
I disavow! I DISAVOW!!!! When your entire job consists of taking staged "diversity" photos and condemning harmless events that offended the delicate sensibilities of the tar monsters, there's a certain predictable pattern to the apologizing and groveling. Keep clinging to the meaningless and pathetic careerism with a death-grip, you're a real inspiration.

Makala McNeil, president of Alpha Kappa Alpha sorority, one of the nine historically African-American sororities and fraternities, said she saw the banana peel after leaving a group discussion that addressed race relations.

I juss gawt dawn tellin dem cave beetches bout how dey badd an den eye bee seeing dis. I know, what are the odds that a "discussion" consisting of a panel of screeching living fossils not only failed to fix our nation's original sin but instead led to more comical simian ooking. The mammy scared of ghosts in a "Little Rascals" short has more dignity and introspection. 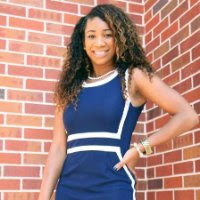 
“The overall tone was heavy,” McNeil, a senior integrated marketing communications and sociology major, said. “I mean, we were talking about race in Mississippi, at the University of Mississippi and in the Greek community, so there’s a lot involved.”

Dark creatures straight from my worst nightmares were agitated and belligerent. I was just hoping to get out alive. I kept my mouth shut and my head down. They called me various slurs and were screaming about nigga bodies (Ah! Ah!). I feel I learned a lot. I'm no Thought Criminal, that's for sure.

“It was so strange and surreal to see it there,” McNeil said. “We were all just sort of paranoid for a second.”

I realized that witchcraft, black magic and the evil eye are completely real and then paranoia set in, knowing that someone is going to get burned at the stake over this.

She said the image was especially disturbing in light of an incident on American University’s campus in May of this year. The morning Taylor Dumpson was to take over as the school’s first female black student government president, students found bananas hanging from nooses across campus. Some of the bananas were inscribed with references to Dumpson’s sorority, Alpha Kappa Alpha.

These are the most completely plausible events that have ever been documented. This was probably the work of the "klan." We need fewer rights, more condescending lectures and a lot more censorship on the internet.

“As the staff member responsible for the wellbeing of our community, I felt it was imperative to provide space immediately to students affected by this incident to allow them an opportunity to voice their pain and concern,” Arndt wrote in her statement.

These are the future leaders of a healthy and strong Democracy.

At the start of this session, McNeil said one black student stood up and asked that everyone there google the American University incident to understand the banana peel’s significance.

She said Swanson stood up and came forward almost immediately after the question. He apologized and said he did not mean any harm by leaving the peel in the tree. “I want to sincerely apologize for the events that took place this past weekend,” Swanson said in a statement to The DM on Tuesday night. “Although unintentional, there is no excuse for the pain that was caused to members of our community."

I am an enemy of the People's Revolution. I plotted to kill Comrade Stalin. I deserve the worst possible punishments.


We must all keep in mind how our actions affect those around us differently.

Develop the "American Look." Guard against Thought Crime and Face Crime, my friends. Be ready to turn yourself in. "Diversity," the mighty strength.


“You see how much fear and how much anger you insight in black people just from an unintentional image,” she said.

It's almost like the negro is completely incompatible with White civilization and it would be in our mutual benefit to remove them, but I don't think that's the conclusion you're supposed to reach. Instead, more guilt, groveling and appeasement, please.


“There were a lot of emotions being showed and a lot of transparency,” McNeil said. “I just don’t feel as though it was being facilitated in a constructive way.”

We called them honkeys and told them to goo-goo dat, but it was clear it wasn't really sinking in that literally everything a White person does is capable of offending the evolutionary dead-end so you need to die. 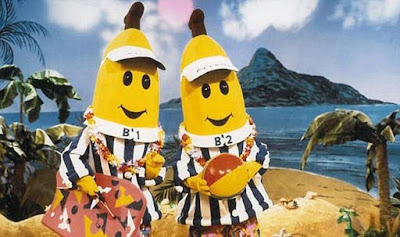