A Race That Has Been Subjected to Hate

October 17, 2017
The main products of American higher education are student loan usury swindles for the traveling merchant, completely indoctrinated human derelicts who can't find work with their expensive and worthless degrees, "look at that boy run" sports cuckoldry, "educated" dark animals with unbelievable amounts of entitlement combined with Dunning-Kruger delusion and the endless phony hate crimes with all the attendant wailing from the professional victims. Generally, we're subjected to the initial outrage phase while the actual collapse of the kosher narrative is relegated to the memory hole. Today's story is somewhat unusual, since we're going to skip directly to the predictable conclusion of the campus "bias incident" and even get some wet-brain speculation about the motives of the racial inferior behind it.

A 52-year-old black man is being charged with destruction of property after allegedly getting caught spray-painting a swastika inside campus living quarters, according to Fox5.

Hey silverback, watcha doin'?!? Before the hoax could even be completed the low I.Q. monster is caught. There will be no inspiring formal declarations from sinecure careerists, no grimly determined promises to catch the malefactors from law enforcement, no marches or agitated dark mobs. Your attempt to cater to our worst impulses was so inept we couldn't wring any anti-White propaganda out of it.

One student, apparently bewildered by the news, didn’t seem to recognize the possibility of Ronald Alford Sr.’s artwork being an attempt to stage anti-Semitic sentiment at the college.

A student loan victim grapples with this confusing incident. This should be good for a laugh, before we mourn for the future. 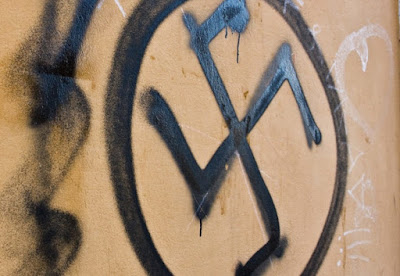 This is so close to being correctly made I want to give the tar monster some credit, but then it went and ruined it all by getting caught right away.

“I guess it proves that you don’t have to be a certain race to hate people,” student Abby Gorun told Fox5.

I know, what a stunning revelation. Maybe your jew professor wasn't entirely honest with its claims that only Whites can be "races." It's almost like you're forming coherent thoughts. Great job, I knew that six figure pound of flesh debt would be worth it.

“But I mean, it’s just you would think that someone, especially from a race that has been subjected to hate before, you would think why would you want to reciprocate that to somebody else?”

Or not. I guess it would be possible to look at the evidence and come to a more incorrect conclusion, but this is strictly a hypothetical postulate, I can't produce drivel worse than this on short notice. As usual, the endless negro appeasement counts for nothing and we can only marvel with dull surprise that sullen, resentful and often dangerous alien members of our society might hold hostility toward their fellow bar codes.


Alford is also being charged with disturbing the operations of a school, and will be barred from entering campus, according to Fox5. A hearing in court is slated for sometime next month.

Now for the "races" justice system to punish the Hitlerite night terror. We can't put this living fossil in our "over-crowded" prisons. Maybe just some sort of wrist slap, as per tradition. At least this time no one was promising severe punishments for the evil not-sees, only to immediately recant when the obvious fraud is revealed.

Fox5 is basing its report of his race off of court records, as well as a listed address and them going to where the man apparently lives. The Daily Caller News Foundation reached out the University of Maryland Police Department multiple times, but received no comment in time for publication.

No one wants to talk about this except some empty-headed student. I'm not sure why this is, I thought these were "teachable moments." 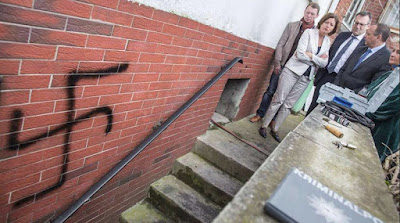