My Father was a Rapefugee

October 10, 2017
Please watch the following amazing video. Be sure to dislike and leave comments.


We open with the charge of the kike brigade, as Soros funded nation-wreckers advance, carrying various pieces of garbage that I suppose have some significance within their demonic false religion. Do you use that puke green tent to trick g*d? I really want to know. "Build Sukkot, Not Walls" declares a sign. Yeah, I'll get right on it. Get to work you unclean meat, let the brown inferior that will become the slaves promised by the talmud into your dying homelands.

Other signs contain drivel about "Syrian Refugees." Women and children, fleeing war. Make room, cattle, make room. These moronic and dangerous fighting age males will make an excellent addition to the American salad bowl. You can trust me, I'm holding a ram's horn, wearing a weird little cap and I was the one g*d selected, not you. A jew alien gets on a bullhorn and starts rambling about the great righteousness of the poisonous mushrooms. Apparently our refusal to literally bring the entire Third World into our nation is a crime against some nebulous moral standard and we all need to die for the jew. Well, I'm convinced. 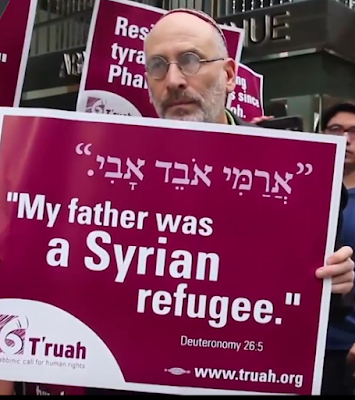 Your father was the devil and his lusts you will do.

Time to quote the book of Deuteronomy, which is a great place to start when making difficult decisions about immigration policy. Here's some excellent verses to get you going.


When the Lord your God brings you into the land you are entering to possess and drives out before you many nations—the Hittites, Girgashites, Amorites, Canaanites, Perizzites, Hivites and Jebusites, seven nations larger and stronger than you and when the Lord your God has delivered them over to you and you have defeated them, then you must destroy them totally. Make no treaty with them, and show them no mercy.

When you march up to attack a city, make its people an offer of peace. If they accept and open their gates, all the people in it shall be subject to forced labor and shall work for you. If they refuse to make peace and they engage you in battle, lay siege to that city. When the Lord your God delivers it into your hand, put to the sword all the men in it. As for the women, the children, the livestock and everything else in the city, you may take these as plunder for yourselves. And you may use the plunder the Lord your God gives you from your enemies. This is how you are to treat all the cities that are at a distance from you and do not belong to the nations nearby.

If a man happens to meet a virgin who is not pledged to be married and rapes her and they are discovered, he shall pay her father fifty shekels of silver. He must marry the young woman, for he has violated her. He can never divorce her as long as he lives.

Skipping ahead, an Asiatic-looking mystery meat explains the protest. Apparently these are "issues that concern human beings," but I can't stop staring at this thing and wondering what the hell it is. Here's your future if you lose: no race, culture or future, just an ugly mix of genetic pot-luck. An agitated negro writhes in the background. We must allow everyone to come in and loot, every last enemygrant. We owe it to a demonic alien outsider that wants to destroy our people and enslave what remains.

We cut to a sticker that says "My people were refugees too." I don't think you'll ever find a more compelling argument for closed borders and nationalism. 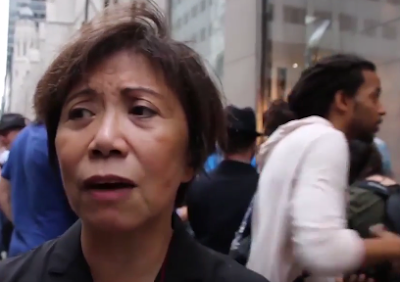 I wonder what the shkotzim think about this? Let's look at some of the comments.

I thought Israel was the one that had the strictest immigration policies on this Earth You hypocrites! Clean up your own backyard Israel!﻿

Why isn't he protesting in front of the Israeli embassy? How many Syrian refugees has Israel taken in?﻿

Paid For by George Soros.﻿

It's not discrimination, enter the country legally stupid fuck﻿

And yet the Israelis won't take any refugees... typical Jews crying victim while starting and funding wars all over the world. Shut the fuck up you poisonous Satanist-Jews﻿

i hate these ugly khazars﻿ 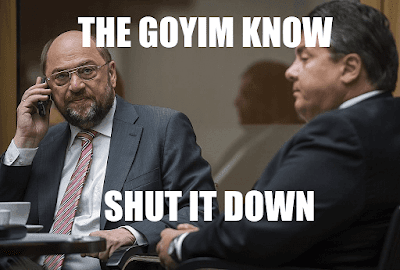