November 22, 2017
If I had unlimited time, energy, patience and resistance to becoming physically ill over attacks on my race I'd make a comprehensive listing of every single phony hate crime. The list would probably be longer than Highway One. It might be easier just to discuss the legitimate ones, assuming there are any. Meanwhile, the backlog of this Mount Everest of anti-White deception continues to grow. How about an extremely suspect "hate" incident from a publik schmuel? Barkevious can't read, write or do basic math, but this worthless dark monster has figured out how to get attention from comical and pathetic "authorities" who slavishly followed the expected kosher script in the face of another highly dubious and low-effort shuck.

School officials in a Missouri community were making plans Tuesday to discipline a “non-white” student whom they said had confessed to writing a racial slur and the phrase “White Lives Matter” on a mirror inside a girls’ restroom at a high school.

Hey mystery meat, watcha doin'?!? Now it's time for the severe punishment we vowed when this obviously contrived outrage began. Yes, the brown grab-bag responsible is going to get it with both barrels, it would be unbelievably hypocritical if that somehow failed to happen, so of course it won't.

Parkway schools Superintendent Keith Marty said in a statement  Tuesday that the revelation that a non-white student was involved was surprising, but it did not “diminish the hurt” caused by the incident at Parkway Central High School in Chesterfield.

Yeah, what a surprise. You could have knocked me over with a feather. We've never seen anything like this. Also, hol up. Is you sayin' dis not min-ish da hurr? There's got to be a way to somehow blame Whites for this, come on, use your imagination!

"The behavior was wrong and the student will be held accountable for this serious act according to our student discipline policy," said Marty, according to the St. Louis Post-Dispatch.

Get ready for an apocalyptic wrist slap.

“It is important to understand why this happened and why we are often quick to assume who is responsible," he added.

The racial slur was found in a girls’ restroom on campus last week, prompting the local community to organize and stand against racism.

After my crops died and I slipped and hurt myself on some loose soil the local community organized to stand against witchcraft, the evil eye and corpse bothering. 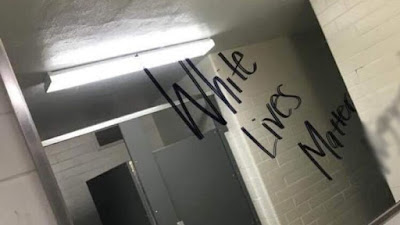 “I was horrified,” West County anti-racism activist Joy Weese Moll told KTVI last week. “A lot of us in West County have a really hard time saying racism exists here. It makes me sad for the person who wrote it because they have not been taught and not learned how beautiful our society can be.”


Imagine the relief this pathetic useful idiot must feel now that the hoax has collapsed. Maybe your entire world view is a lie taught to you by a jewish con-artist? I mean, food for thought, right?

“This is very much a white person issue that we need to tackle as white people and speak up against,” parent Alexandria Lane-Detwiler said.

The real White person issue is why we allow dangerous inferiors and kosher criminals to share our countries and endlessly attack us.

“The actions of this student are a violation of our discipline code and the student will be held accountable within the parameters of the district’s discipline policy,” he wrote in a statement, KTVI reported.


“The use of the N-word, in the context of the message on the bathroom mirror, provoked feelings of hate, not love. As I stated last week, actions and speech which degrade an individual’s human dignity have no place in school; they have no place at Central High.”

The important thing is it could have been real and Whites are still evil and deserving of genocide in our own homelands.

Modern Heretic will not be updated during the Thanksgiving Holiday, but will return on Monday. 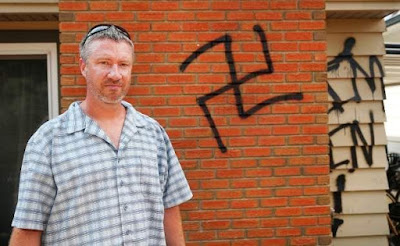