November 27, 2017
Please watch the following amazing video. Be sure to copy and spread far and wide.


Welcome to the globalist bazaar. What you're looking at is the end result of decades of endless jewish war against White America. The faceless, mindless slaves promised by the talmud press in, eager to battle for Chinese baubles. There isn't a White person in sight. At least we still have muh constitution. Civic nationalism will save our homeland. Give us you brown scumbag, your foreign opportunist, your moronic wetbacks yearning to loot a nation that has forgotten how to defend itself, your huddled masses of greasy dullards teeming in a Walmart, we lift up our blue light specials beside the automatic doors.

If we lose, if we can't restore our nation, this is what will remain. La-teen-oh filth, all against all, human maggots devouring the vestigial remnants of what was once a thriving civilization. When the lights go out, they're going to stay out. You can't build a future with other people's children. They have to go back.

The sawed-off sewage begins tearing into a box of undifferentiated oriental electronica. With a few minor edits you could easily change this into a scene from Guatemala with the shit-colored inferiors ripping open the relief aid sent by cucktians to their permanently ruined nightmare country. We'll uplift these animals, teach them about representative democracy, get them voting for cuckservative candidates. They've already got the "mindless consumerism" aspect of modern kosher American culture down, it should be easy to instill a reverence for the Bill of Rights and get them to vote for Raphael Cruz. 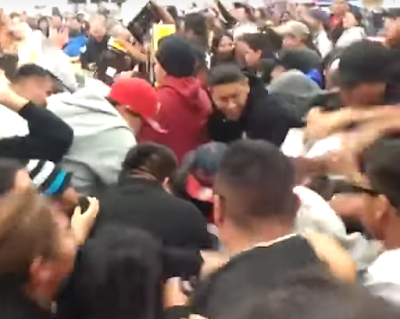 Doing the mobs Whites won't do.

The strident la-teen-oh chaos continues, scavengers tearing at putrescent remains, the salvation of muh economy and the retirement pensions we earned by watching passively as our country was destroyed. Look at them "pumping" shekels into the gee dee pee, we were very wise to allow this invasion. Finally, the authorities, represented by the only Whites in the entire building, arrive to attempt to restrain the rich and exotic vibrancy. A taser is deployed into the identical looking and behaving "diversity" tumor. Time for Pablo to take a voltage siesta.


With order, such as it is in our new third world home, restored, the may-hee-cans return to their default state of indolent passive hostility. We need a lot more of this in Idaho. Just think of those tasty burritos and all the music, goyim. There's some "wooing" and the PRC microchips are deployed in a somewhat more orderly fashion. "Can I get a memory stick?" asks a faceless bar code. More like a memory hole.

The sound cuts off, giving the final minute the avant-garde quality of an art film. I call this "The Death of a Nation." Brown hands extend, grasping for the materialism that's extremely important and should dominate you life, shkotzim. This is the price of failure. There is no participation trophy in the battle for survival. Suicide is a sin, not a virtue. 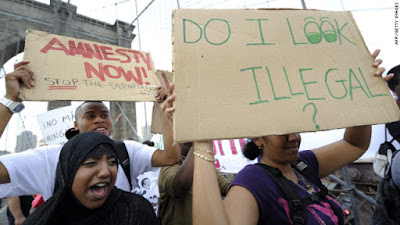