November 16, 2017
How many cultural, religious, genetic and racial aliens should a White nation be required to warehouse on a generous entitlement system and then allow to run wild? Is there a limit at all? Slowly it's becoming acceptable for a European to ask these questions, even if the most common answer is still some minor variation on "You're a 'racist' hater and evil!" or "There's plenty of native Whites participating in gang rapes, honor killings, allah rides on undocumented roads and the like, no we won't show you any numbers, shut up and die."

Today's subject is a nicely representative example of the highly dishonest and hate-filled answers that are provided to highly legitimate inquiries into our increasingly bleak future as a hated minority in our own lands. It turns out the problem isn't the invasion columns of rapefugees, so you can rest easy now and stop raising awkward issues related to your planned kosher genocide.

Sweden’s justice minister has rejected a proposal by the Moderate party to record the ethnic backgrounds of sex attackers saying the only thing that matters is that they are men.

Yes, this is all that matters. Basic pattern recognition is the mortal sin of this age. The "men" involved might share some other common traits, but that's irrelevant and you're wicked if you think otherwise. There does not seem to be a limit to the delusional suicidal mania the Swedish mind is capable of.

Justice Minister Morgan Johansson said that the Moderates wanted to simply blame the rise in sex crimes on migrants and argued that all criminals should be treated equally.

We hold these truths to be self-evident, that all criminals are created equal and endowed by their barbaric islamic nation of origin with a violent contempt for their benefactors. There is rich and exciting "diversity" among the Swedish rape apes: Syrian moose-limbs, Somalian moose-limbs, Eritrean moose-limbs, Afghani...

Johansson also pointed to the #metoo movement saying that sex attacks occur among all ethnicities and backgrounds in Sweden, broadcaster SVT reports.

We can now confirm that being awkwardly asked out for coffee by a gelded Swedish beta male and being repeatedly gang-raped by foreign invaders are exactly the same. Sure, moe-ham-head is running a child prostitution brothel that we're ignoring for fear of "racism" accusations, but Bjorn once smiled at me without my permission, which is also rape according to jewish feminism.

“The common denominator of those who commit these crimes is that they are men,” Johansson said and added: “It seems that the Moderates are pulling out of talking about the men’s role in this and instead just want to blame the immigrants.”

The important thing is every single "human" burning cars and attacking our women had ears. This is the real problem, ears. We really need to focus on the auditory menace. Any other explanation is wrong, just ask the traveling merchant. 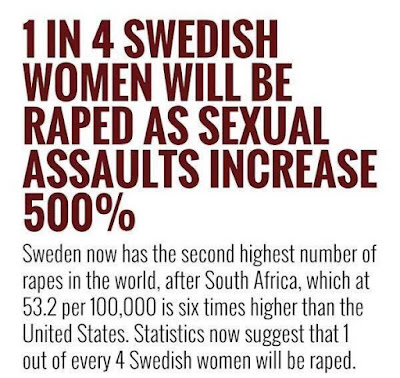 This was caused by men.

Earlier this year, the populist Sweden Democrats made a similar proposal when they asked the government for information relating to the relationship between migration and crime.

We must also examine the relationship between fire and heat.


Johansson rejected the request saying: “Sweden’s earlier figures and numerous international studies all show much the same thing. Minority groups are often overrepresented in crime statistics, but when controlling for socioeconomic factors this [the overrepresentation of minority groups] disappears almost entirely.”

The Moderates have also made a number of other suggestions to reform the rape laws in Sweden, including increasing the sentence for coercive rape to five to eight years in prison and very serious rape should have a sentence of between seven and 10 years behind bars.

The proposal by the Moderates follows a call by 10 members of the party to deploy the military to help police in the growing number of heavily migrant-populated no-go zones in the country last month.

This is the state of Swedenistan in current year. Send in the military!


The proposal was ultimately rejected by Justice Minister Johansson who said: “There are no military solutions to the problems.”

Yeah. No shit. The solution is deportation, borders and a restoration of national identity and sanity.


Johansson has been the subject of controversy in the past for his various statements, including totally refusing to ever consider stripping the citizenship of Islamic State fighters returning to Sweden from the Middle East. Johansson said the Swedish government refuses to make anyone “stateless”.

I'm sure your generosity toward the worshipers of a snake idol will be fondly remembered when your defiled corpse is rotting in an unmarked grave. 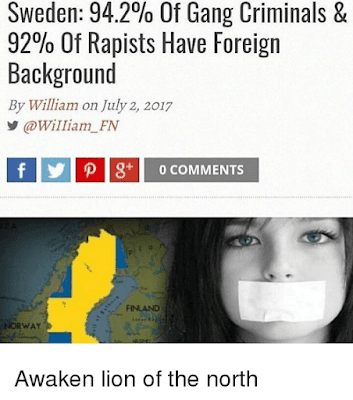