November 07, 2017
Our jewish enemy is currently tying themselves in knots attempting to explain to the shkotzim how "It's okay to be White" is "hate." They want us dead. A simple campaign has the chosenites openly calling for our destruction. What we need right now, clearly, is a legitimate campus hate crime so that the merchant can reclaim the moral high ground that they eagerly ceded to us in their anti-White blood lust. Well, we're going to have to keep looking, because today's story is just another typical example of the phony hate crime genre, featuring an 80 I.Q. educated negro, the usual low effort vandalism and the predictable overblown kosher response before the pathetic artifice collapsed.

Racist graffiti that was painted on a car parked near Kansas State University last week turned out a hoax, and was written by the car’s owner.

I know,  I was surprised, too. Who could have predicted this? It's not like it conforms to a pattern we've seen thousands of times and always concludes with the "victim" being unmasked as the perpetrator and then not being punished in any way.

The words “Go Home Nigger Boy” and “Whites Only” were painted across the back windshield of the car, along with other explicit words.

We now have incontrovertible proof that witchcraft is being practiced here in our Puritan village. We will catch the devil worshipers and root wizards, no matter what the cost.

Twenty-one year old Dauntarius Williams, who is African-American, apologized for the prank, according to The Kansas City Star.

Barkevious Smith, who is a negro, apologized for trying to encourage violence against Whites with a lazy and deeply cynical fraud. The "African-American," always the first and never the second. 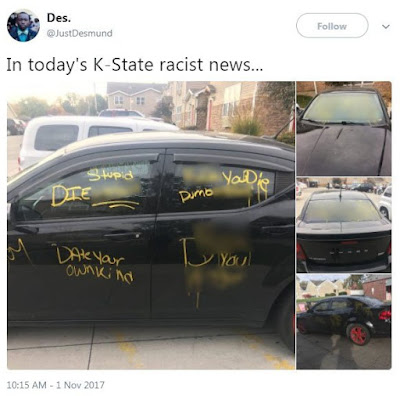 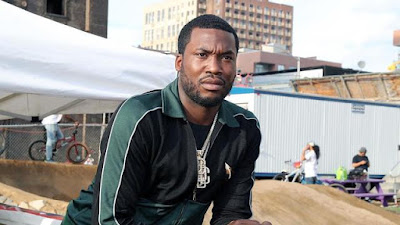 “I would like to deeply apologize to the community,” Williams said in a statement.

Wow. What a hero. This worthless genetic alien has clearly learned its lesson.

The graffiti was meant as a Halloween prank, Williams said. Williams even filed a false police report.

You know, for Halloween? It's a pretty standard Samhain tradition to spray paint slurs on your own car and then notify law enforcement, right up there with bobbing for apples and carving pumpkins.

After the car was discovered Wednesday, African-American students led a meeting to discuss possible underlying racism on campus.

Student loan debt pound of flesh "racists" are on the loose at the communist indoctrination center! We must discuss the witch's sabbath being performed in the woods by teenage girls and the underlying diabolic possession behind this.

The FBI also got involved, opening a civil rights investigation. The local police have thanked them for the help.

Yes, this sad bullshit got national attention. I'm sure they made grimly determined promises to catch and severely punish the vile White criminal behind this. Let's see how that played out.

No charges were filed in the case.

Nothing to see here, goyim. 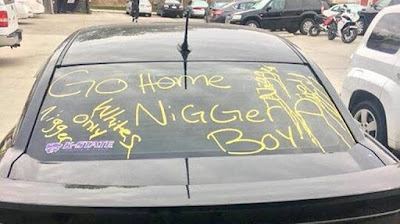