The Lighter Side of Negro Pathology: The Shadow of God

November 29, 2017
I'm a deeply spiritual person, but I'm not what you'd call religious. This means I reject healthy traditions and embrace jewish nihilism. I like stumbling around in a narcotic haze of kosher sanctimony (We're all equal, etc.) and delusional acceptance of the coming destruction of everything that matters. Naturally, I'm heartened to see similar amazing spirituality in the South African tar monster. Animals straight from a nightmare have improved on stuffy, boring and non-vibrant religious ritual, proving just how close to g*d the Sun People truly are.

A church in South Africa is currently trending after its unorthodox way of baptizing its faithful – with their favourite alcoholic drink instead of water – surfaced.

Compared to typical South African negro savagery, ignorance and idiocy this barely rates, but I guess it is an amusing oddity in between the necklacings, the witchcraft amulet construction from slaughtered albinos and the systematic genocide of a White population that foolishly turned their country over to a creature that's equal parts devil and child.

That’s not all, the congregants at the Gabola Church have also been given a go-ahead to drink alcohol during church services.

That awkward feeling when Dark Continent madness is still more sensible than many American cucktian churches and their call for endless foreign invasion in the name of "Jay-sus."

52 year old Bishop Tsietsi Makiti, is the founder of the church and is the brains behind the idea.

Meet the negro genius behind this brilliance. With its 65 I.Q. mind it figured out it could "get muh fade on" during the magic show. 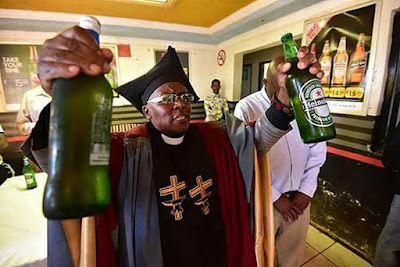 Due to the beer baptization, Bishop Makiti’s church has witnessed its membership rocket to over 500 members in just under two months.

We now have an easy strategy to save Europe's cathedrals from becoming mosques.


"People who drink and get baptized by beer are happy and peaceful. This means they are living in the shadow of God."

As I walk through the valley of the shadow of God I will fear no evil because I'm totally wasted off dis King Cobra fawty, mudda fudda. 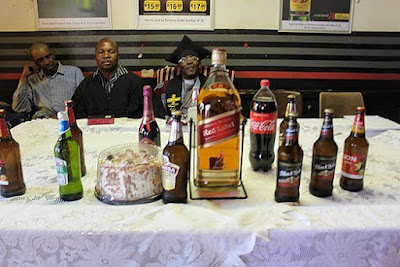