December 21, 2017
A spiritually healthy nation is resistant to attacks from the jewish alien; a people who draw strength from tradition and shared faith are going to be a hard sell for materialism, careerism, personal atomization, "muh rights," hedonism, communism, jew feminism and all the other evils unleashed by the traveling merchant during the disastrous jewish century. The solution for the enemy within is to endlessly attack the national immune system, generally framing said attacks as a need to "modernize," institute "progressive" reforms, or similar appeals to faddish and fleeting approval of what their media arm has deemed acceptable opinion for Current Year (It's 1925, Grandpa! Get with the times!). To say this program of insidious corruption has been successful is a massive understatement. Now the dying European Church eagerly throws itself on the semitic pyre, happily pushing deviance and evil that would have been unthinkable when our ancestral homelands were healthy and sane.

The first female Bishop of London has weighed into the debate about the church embracing the LGBT community.

I don't see why there's a debate, everyone loves bacon, lettuce and tomato on their cheeseburgers. Wait, what? Putting light bulbs into your rectum? Positive loads? GRIDS??? Okay, I can see how someone might take issue.

Former midwife Sarah Mullally, 55, was yesterday appointed to serve as the Bishop of London – the third-ranking role within the Church of England, behind the Archbishops of Canterbury and York. ﻿ 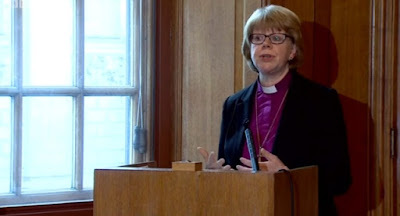 
Mullally, who has previously served as Bishop of Crediton in Devon, was appointed to the key role – reflecting the church’s growing modernisation just a few years after women bishops were first approved.

Muh modernization. The pews are empty, your teachings are completely irrelevant to mainstream society, you have no moral authority whatsoever and moe-ham-head moon cultists are converting your churches into stone cube worship centers. Yes, "keeping up with the times" has been a tremendous boon for your dead church, great job.

Conservative evangelicals within the Church have threatened to break away if there is any move towards inclusivity, while moderates warn the Church’s anti-LGBT stance risks alienating people across the country.

Two of the six remaining parishioners have threatened to leave. We need more "inclusivity" in our rotting, vacant buildings. I'm sure the anonymous sodomy enthusiast will join your dead faith if you just express full approval of degenerate and vile reprobation.

When the Evening Standard asked the Bishop about LGBT people, she said: “Nobody is outside the love of God.”

G*d loves your sin. Keep pouring cement into your ruined anus, there's a place in heaven for you.

The Bishop added: “London reflects a diversity of views and everybody can find spiritual home in London. I’m chairing one of the committees which is reflecting on our teaching and tradition on this issue.

Sincere and humble devotion to an eternal ideal, engaging in faceless sodomy at a boathouse, it's all pretty much the same and we need lots of "diversity" because the jew said it was good and they're the chosen people. Next year I'll be chairing a committee on the demolition and/or mosque conversion of all our remaining property. 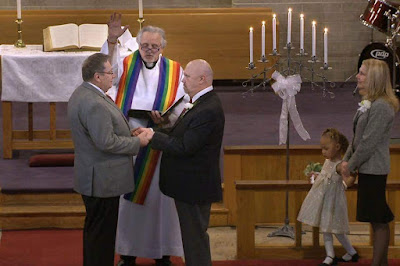 I love my dead gay church.

“What we have to remember is this is about people, and the church seeks to demonstrate love to all, because it reflects the God of love, who loves everybody.

The divine unmoved mover is also a gullible chump who can be endlessly conned into excusing our blatant defiance of His timid little suggestions for how we should live. I'm guessing you've been hanging around some rabbis.

She added that while “there is no provision within the Church of England” for same-sex couples to marry, “there is a period of reflection that is going on and I am part of that”.

The laws of The Creator, literally written in stone, are subject to change at any moment based on the whims of a childless madwoman.


The Revd William Taylor, the Rector of St Helen’s Bishopsgate, has threatened to back a split in the church if the new Bishop does not “condemn homosexual relationships as sinful”.

An atom was once defined as a particle so small it can not be split, a condition that will soon apply to your church.

Before the Bishop was appointed, he had said: “We now wait to see what the new Bishop of London’s views are.

Asked about Taylor’s views, Bishop Mullally deflected: “What we have to recognise is there’s a real diversity within the Church of England.

We've got two elderly people who stayed because they're deaf and can't hear the sermons, we've got a moose-limb rapefugee who uses our pews as a place to beat off and this other guy who I thought was a member but it turns out he's a janitor hired to clean the place. Vibrant "diversity" and a bright future, allah willing.

At the Church of England’s General Synod earlier this year, a number of key concessions were made to modernisers on LGBT rights.

If this doesn't reverse your sickening decline and fall I'd be completely amazed. 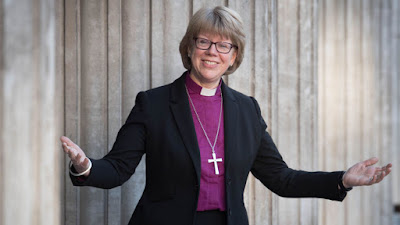